The middle of our trip to Africa was spent looking at wildlife. We moved from Zimbabwe to Kruger National Park in South Africa, where we enjoyed two full days driving the preserve, spotting a huge variety of birds and animals. 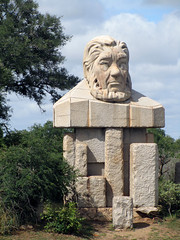 Humans have been roaming the area around Kruger National Park for about 250,000 years, and it has long been teeming with game. It currently forms the largest portion of the Great Limpopo Transfrontier Park, a vast “peace park” that will soon cover nearly 100,000 square kilometers (36,000 square miles). As a transfrontier park, it spreads into more than one country: it reaches into Zimbabwe and Mozambique.

With so much space, there’s plenty of room for the animals to roam free. All the same, there are only small numbers of certain critters. While there are over 130,000 impala in Kruger, for example, there are just 300 black rhino and 350 wild dogs. (Every guide said the same thing: “I can’t guarantee you’ll see any animals today. [beat] Except impala. I guarantee you’ll see impala.”) The next-most populous animal in the park is the blue wildebeest (or gnu); there are 31,000 of them in Kruger. There are 23,000 zebra, 12,000 elephants, 7000 giraffes, 2000 lions, and 2000 hyena (but we didn’t see a single one).

Because the park is so huge, we only saw a small piece of it. On both Thursday and Friday, we spent six to eight hours in safari vehicles, driving through the southern reaches near Skukuza Gate. We entered through Paul Kruger Gate, and roamed the hard and soft roads nearby, searching for game.

We saw all of the Big Five — leopard, lion, elephant, rhino, and buffalo — though some were easier to spot than others. The two leopards we saw, for instance, were both back from the road. One was in a tree, which gave us a better view, but he was still tough to photograph.

This video will give you a ten-minute tour of the park. I took over an hour of footage and have trimmed it to this. Because the animals were sometimes far away, and because we were in a moving vehicle, and because it was sometimes raining, the video isn’t always as steady or as clear as I’d like. But I still hope it’s fun.

A ten-minute video of highlights from Kruger.

I also got some good photos. For instance, here are three photos that show what it’s like to ride in a safari vehicle, looking at animals. The vehicles have high sides, but still offer plenty of space for a passenger to take photos. If it gets too rainy, the sides can be rolled down so people stay dry. (We had a couple of misty periods during which we covered ourselves with blankets.) 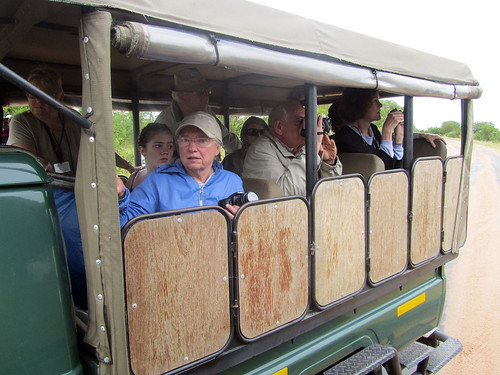 Life in a safari vehicle — to the animals we look like one big, lumbering beast. 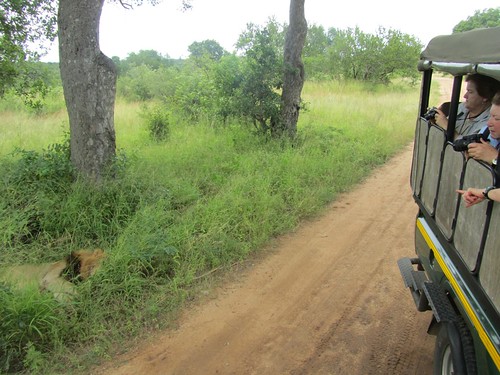 Close encounter with a lion. 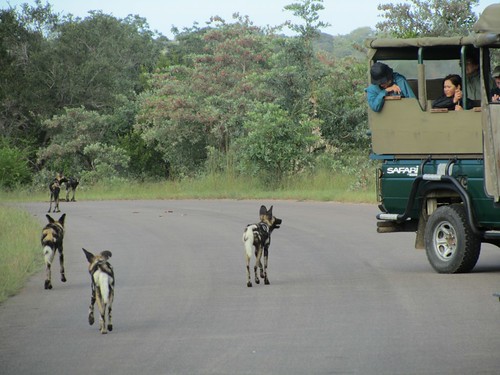 There are only 350 wild dogs in the park; we saw six. They seemed curious about us.

Our guide in Chobe told us that when we’re in a safari vehicle, we seem like one big beast to the wild animals. But if we were to climb out, we’d suddenly become prey. We stayed inside.

I don’t know what I was expecting from the game drives (by the way, “game drives” and “safaris” are apparently the same thing), but I enjoyed them. If anything, they went too quickly. I would have liked to spend a week driving slowly through the park. I never tired of looking at the animals. Mostly they just did boring stuff. But so what? Their boring stuff was still new to me. And sometimes we got to see neat things, like a month-old baby elephant. Who knew baby elephants could be so cute? 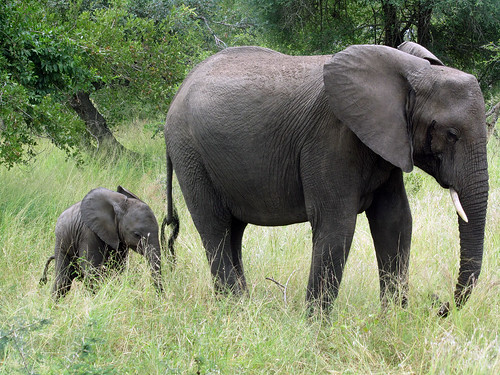 I’m not usually a fan of baby animals (except kittens), but even I loved the baby elephants.

Here are a handful of other animal photos from our trip (click on each to view a larger image at Flickr).

I have many other animal photos, and am happy to bore you with them when I see you in person. 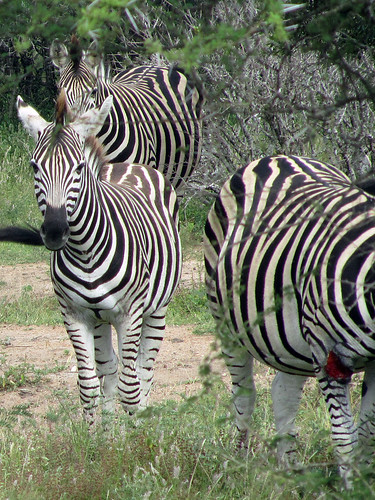 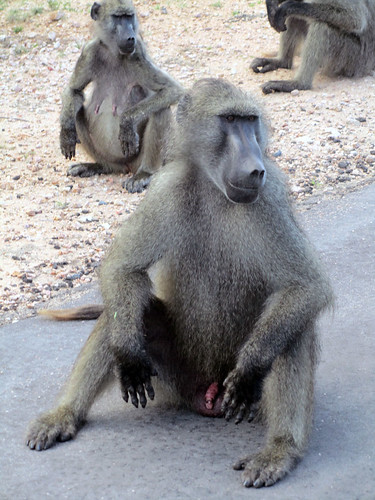 As I may have mentioned, Kris was enamored with all of the birds we saw in southern Africa. She made friends with Jim and Linda, a couple from Salem, who are avid birders. Together, the three of them cataloged their sitings. Here are two of the common birds we saw at Kruger: 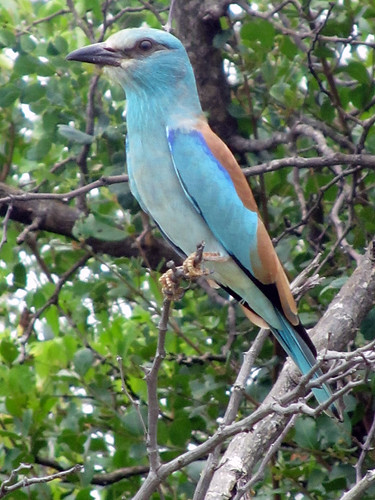 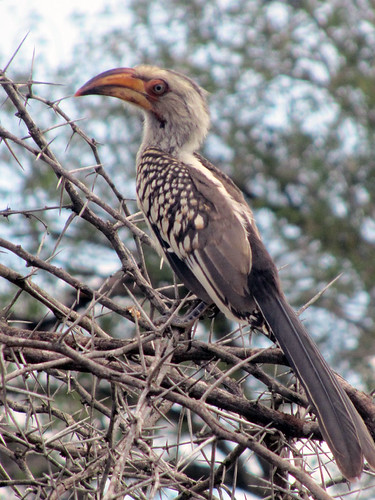 At first, we were delighted to see the very beautiful European Roller. Eventually we realized they’re also very common. “There’s a roller on every tree,” became Kris’s motto, because it truly seemed like there were. But that’s okay. There’s a blue jay on every tree here in Oregon, and I still like them.

One of my favorite things about Africa was the sky. Parts of the U.S. are known for having a “big sky”, but I’ve never really understood what that meant. Now I know. Namibia had a huge sky. And the skies around Kruger were gorgeous, too. 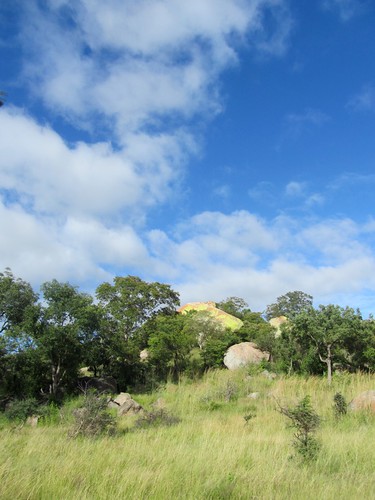 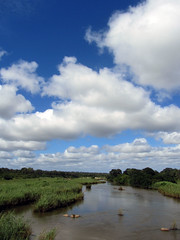 Three views of the African sky — one with impala.

On our first evening at Kruger, we spent a couple of hours getting to know Alissa and Ruby, the mother and daughter from Jacksonville, Oregon. Alissa is an attorney and about our age. Ruby is thirteen, and probably the most talented person I will ever meet. (Well, according to Ruby, anyhow.) She’s also besotted by Justin Bieber.

On the second evening, the group was entertained by a group of young singers from the local area. The Tipfuxeni Youth Project sang traditional songs, and then asked some members of the audience to dance. I knew early on that I’d be dragged onto the dancefloor. I was the closest to the group, and the young woman on the end kept eying me. Anita got some snaps of my smooth moves: 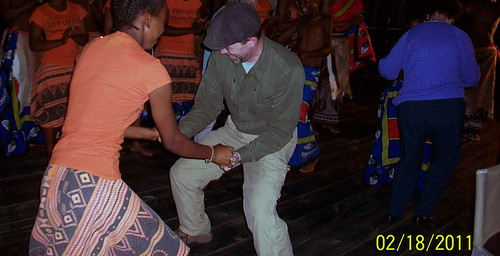 I was as graceful as a rhino. [Photo by Anita.]

Our safari days were awesome. It’d be great to come back to Kruger in the future to drive through in our own vehicle. I’d love to spend a week watching the animals, lingering for an hour to watch a giraffe eat instead of hurrying on to the next photo op.

After three days in the park, we boarded a plane to Cape Town.