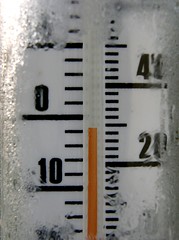 On our final night in London last month, Kim and I had dinner with Laura Roeder and her husband, Chris Williams. They were married in November, roamed the States while waiting for Laura’s visa, and are now settling in the U.K.

Laura’s from Texas, and though she likes the U.K., she finds some things — such as converting temperatures from celsius to fahrenheit — a bit confusing. Chris, who is from England, has similar trouble with temperature conversion, but in the opposite direction.

“I have a little trick that makes converting celsius to fahrenheit pretty simple,” I said, taking a sip of wine.

“Really?” said Laura. “It never seems that simple. You have to subtract 32 and divide by nine-fifths or something like that. It’s complicated.”

“He can just do it in his head,” said Kim. I had spent the last month converting temperatures for her while we traveled across Europe.

The Secret to Converting Celsius to Fahrenheit

“The secret is to memorize a couple of ‘landmarks’,” I said. “For instance, most people know that zero degrees celsius and 32 degrees fahrenheit are the same. That’s your first landmark. Zero celsius is cold. In fact, it’s the freezing point.”

My friends, their mouths full of pizza, nodded in agreement. That was an easy one.

“Well, there are just a few other landmarks you need to know,” I said. “The first is fifty degrees fahrenheit, which is ten degrees celsius. That’s a cool day, but not a cold one.”

“Next is 68 degrees fahrenheit, which is a comfortable room temperature. That’s twenty degrees celsius. Easy, right?”

“Well, it’s not too hard so far,” said Chris. “Fifty is ten. Room temperature is twenty.”

“You wouldn’t want to use this method for science,” I said. “But for daily life, it works just great. And though it may sound a little complicated at first, it’s really very easy.”

“Who taught you that?” asked Chris.

“Nobody,” I said. “I just made it up myself. I’ve been doing it this way for ten or fifteen years. And to be honest, I now find that I think in celsius instead of fahrenheit. It makes sense once you get used to it.” 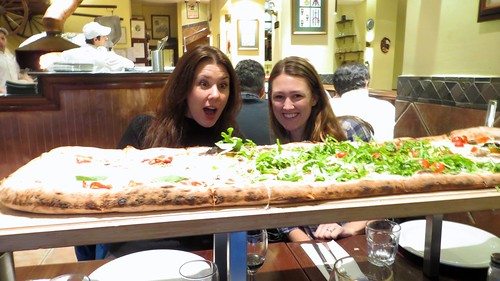 Kim and Laura and our enormous pizza…

How to Convert Celsius to Fahrenheit

Okay, in story form, this method might seem a little complicated. But it’s not. Let me give you a bullet-point summary:

Actually, that last tip is key. If you really want to make things easy on yourself, that’s the only thing you have to remember: You can estimate that one celsius degree is two fahrenheit degrees. Then when you here that it’s 26 degrees celsius outside, for instance, double that (52 degrees) and add it to 32. In this case, you’d end up with an estimate of 84 degrees fahrenheit. It’s actually 79 degrees fahrenheit, but 84 is probably close enough for your purposes, right?