O Foldedspacians — the few, the proud, the brave. I have no idea if this entry can even be posted once I reach New York, but at least I’ll give it a try. We’re over the Atlantic Ocean, due south of Iceland, literally chasing the sunset. We left London Heathrow at 20:30 local time and are scheduled to land at New York JFK at 22:38. What that means is a two hour sunset stretched to seven hours in length. Of course all I can see is an ocean of clouds below — we’re cruising at 9,753 meters (32,000 feet for those of you in Oregon City).

When we land, we’ll still have two or three hours of Stuff before we’re actually able to get to sleep (at 1 or 2 Eastern — 10 or 11 Pacific). Basically, we’ll have been up for 24 hours straight!

Why haven’t I posted sooner? The reality is I haven’t had time to post before now. I have five hours of down time now before we land. That’s the largest block of time I’ve had since the flight from Portland to London. As a guy who likes his alone time, you can imagine how I must feel.

So how has our trip been? It’s been great, but not without bumpy spots. It’s been l-o-n-g, that much is for sure. And I miss the cats. Even Toto.

We arrived in London on the 15th of July and spent a couple days hitting all the major tourist sites. We saw Big Ben. We saw Westminster Abbey. We saw the London Eye. It was awesome to be in the presence of such history. I love the juxtaposition of the modern with the ancient. I loved seeing sights I’d only read about in books.

My feet hurt for the first several days. I heeded advice from a close friend — Dave, I’m looking at you — that said, “Don’t wear sneakers in London. You’ll stick out as a tourist.” First of all, I was traveling with Kris’ parents, who graciously funded this trip, but who are dead giveaways as tourists. Secondly, there are plenty of Londoners who wear “trainers”. Sure, they don’t wear them to the office, but so what? They wear them because they’re comfortable. Based on the advice I’d received, I picked up a new pair of shoes before the trip. Big mistake. My feet hurt for the first 50 miles.

Since I’ve walked a lot on this trip, however, the shoes were eventually broken in. I’m over 120 miles on them now in sixteen days, with more to go in New York. I hope to have clocked 150 miles by the time we fly home on Friday.

The walking has actually been the highlight of the trip. The best times have been those where I’ve left the group and wandered off on my own, strolling across London or Dublin, setting my own pace. 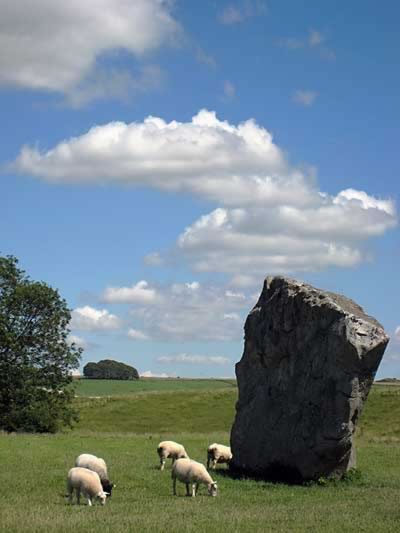 My favorite part of the trip so far: Avebury

Another highlight was the three-day car trip we took across the English countryside. Despite the great things we saw, London was mostly underwhelming. It all seemed so ordinary. I’d expected more. The English countryside, however, did not disappoint. Again Dave was the purveyor of misinformation. (Dave, it’s almost like your trip to England was to a different country.) He’d warned that driving in the U.K. was a surreal affair, with narrow unmarked country roads and confusing roundabouts.

There were many roundabouts, it’s true, but we found the roads well-marked. There were places with narrow roads, too, but they were mainly in the villages, and these spots were plainly marked to indicate who yielded to whom. In fact, Tiffany (my navigator) and I came to prefer driving in the U.K. to driving in the U.S. The traffic laws make sense. I wish I could be more articulate, but I can’t. Everything seemed obvious and we wondered why Americans haven’t adopted certain practices. I also found British drivers pleasantly polite.

Now Irish drivers — that’s another matter. Everything Dave had told me about driving in Britain certainly applies to Ireland. I can’t imagine a worse hell than driving in Dublin. (Note: I didn’t actually do any driving in Ireland, but I walked many miles through Dublin, and took all sorts of rail and bus tours across the country.)

Here’s where I had a completely different experience from another set of friends. Paul and Amy Jo visited Ireland a year or two ago and they loved it. I was nonplused. Dublin seems like Portland, but dirtier and with a little more history. Ireland seems like Oregon, but with a better climate. (Meaning it’s cool and showery, even in the summer.) 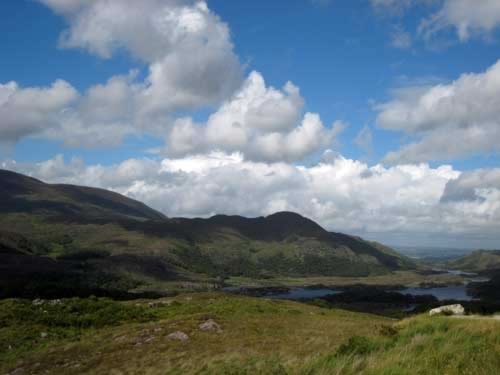 The Irish countryside is beautiful — very much like Oregon.

We found the Irish people rather surly, especially as drivers. They were worse than American drivers! The Irish are also very dirty. The country has an annual “clean towns” contest. This contest isn’t there because the towns are naturally clean — no, it’s because of the opposite, in fact. It’s meant as positive encouragement to clean up the mess. We visited a town that had won the “cleanest town” award several times (Killarney maybe?) and I had to laugh at how messy the streets were. The Irish particularly have a problem with chewing gum. The sidewalks of Dublin are pockmarked with the stuff. It’s bizarre. There’s a country-wide campaign to deal with the problem, but it doesn’t help.

Also, the Irish drink. A lot. But then you probably knew that. They also smoke like crazy. I thought London was filled with smokers, but it’s nothing compared to the near constant presence of cigarettes in Dublin.

I’m sure that Ireland has its charms, but we saw few of them. I don’t mean to make it sound like a bad experience, because it certainly wasn’t. It just wasn’t what I had expected. It was like something out of a depressing U2 song.

We’d also heard bad things about the food in both England and Ireland, but again we found these notions to be false. The quality of the food was good in both places. It’s the selection that is lacking. Dining out in both countries centers around the pub, which is well and good if it’s a once or twice per week thing, but when it’s every day (twice a day), it gets old. Ploughman’s? Jacket potatoes? Fish and chips? Mmmm…. Which one haven’t I had in 24 hours?

(I have to confess that the pub around the corner from our London hotel has an awesome dessert: a Texas fudge cake (a common dessert in both countries) surrounded by warm vanilla pudding. Y-u-m-m-o.)

I’m sure this sounds mostly like complaining, but I don’t mean it to. I’ve had a good time. I’m glad to have seen these two countries, or parts of them anyhow. I’m grateful to Chris and Claudia for heavily subsidizing this vacation.

When I return, though — and I will return — I’m going to do things differently. I’m not going to Ireland (unless Paul and Amy Jo are able to provide persuasive proof that I ought to try again). I’m going to focus most of my time on rural England, which is what I truly loved visiting.

Now, however, it’s time to turn our attentions on New York. We have Tuesday, Wednesday, and Thursday in the city (as well as a bit of Friday, I believe). We’ll lose much of tomorrow to sleeping in (I hope). Thursday is spent at Ellis Island and the Statue of Liberty. And one night we’re scheduled to go see Wicked. That leaves us about a day-and-a-half to pack in the rest of the city. It’s not going to happen, of course, but we can give it a shot.

Meanwhile, Anil is still working on trying to get this weblog repaired. I appreciate his help. I hope to have things working by mid-August. If things stay broken, I’m just going to pack everything off to WordPress.

I hope you’re all doing well. I miss my kitties…

p.s. My fantasies of surviving a mid-air catastrophe over the Atlantic Ocean are just that: fantasies. (You wouldn’t believe how much imaginative time I’ve put into this scenario.) It’s frickin’ cold up here — -53 degrees centigrade. (Those of you in Oregon City will have to convert that number yourselves…)