An Introduction to Classic Films

text by Kris, links by J.D.

[Note: Kris’ original title was Vintage Film Sampler: What to Watch When You Don’t Know What You Like, but it’s just too damned long!]

A friend of ours recently joined Netflix and asked me to make some recommendations. Although Jd & I do our fair share of adding recent releases to our Queue, I think Netflix’s true strengths shine when it comes to viewing both TV series and Classic Films.

Turner Classic Movies was my first introduction to many of these vintage films, but even they don’t own the rights to everything. Netflix has a very respectable inventory of the most-acclaimed Classic Films, but they are missing some of the more obscure from my favorite actors.

If you’re new to the genre, I’ve compiled a list to get you started. Once you’ve sampled from the list, it’s easy to branch out according to your taste. Pick a favorite actress (Katharine Hepburn, for example), Director (George Cukor, anyone?), year or two (hard to beat 1939-1942 in my book), romantic duo (ie. Bogart & Bacall) or style (screwball comedy, film noir).

The list is chronological. Remember that most actors worked on contract in those days, meaning they churned out the movies, so there are bound to be some losers among their credited titles. As the list moves from thirties to fifties, color arrives and the films lose their cinematic innocence. Movies of the fifties and sixties are bleaker, angrier, more “real” than their theatrical predecessors. (By the seventies, I think they’re mostly vapid or in need of therapy.)

I’ve organized most of the list according to leading actress for two reasons: the movies I love almost always have a strong female character, and the biggest names (and salaries) during this era were the leading ladies (partly due to the influence of WWII in the mid-forties). Davis and Hepburn get the most due to the incredible length and breadth of their careers. I hope my plot summaries below aren’t as bad as the Sci-Fi blurbs, but face it, vintage films require you to accept implausibility. 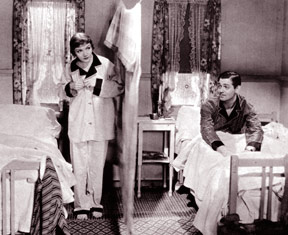 Claudette Colbert — It Happened One Night (1934)
I’m not normally a screwball comedy fan, but the chemistry between Colbert and Clark Gable is undeniable. Directed by Frank Capra (It’s a Wonderful Life), this early film set the stage for the next fifteen (or fifty) years of romantic comedies.

Katharine Hepburn — Stage Door (1937)
Before Hepburn was a big star, her trademark cheekbones were part of this ensemble cast that also features Ginger Rogers, Eve Arden (the principal in Grease), Lucille Ball, and Ann Miller. In the role of a snooty aspiring actress, Hepburn’s so convincingly bad you’ll forget she’s acting.

Bette Davis — Jezebel (1938)
Warner Bros.’ pre-emptive answer to Gone with the Wind. Davis is a rebellious Southern Belle opposite Henry Fonda. Great supporting cast. Includes dueling and the obligatory happy slaves singing gospel songs and an obscenely melodramatic ending. No one but Davis could have carried off this plot. 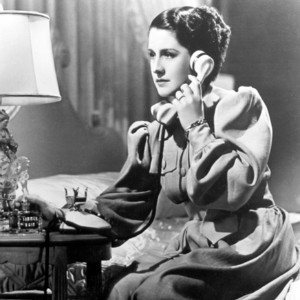 Norma Shearer — The Women (1939)
One of the most popular stars in her day, Shearer’s name hasn’t survived among the pantheon of movie greats. But this is a great film. The all-woman cast includes Joan Fontaine, Joan Crawford, Rosalind Russell, and Marjorie Main. It deftly showcases some of the fads and trends of the day, and has both snappy and heartfelt dialogue. There’s a decent remake as a musical with June Allyson (The Opposite Sex, 1956). If you like Shearer, she played a sympathetic Marie Antoinette opposite Tyrone Power (va-va-voom!) the previous year. [J.D.’s note: there’s also a new version in production. I like this film.]

Katharine Hepburn — The Philadelphia Story (1940)
C’mon — you’ve seen this one, right? An uber-classic. Fabulous trio of Hepburn, Cary Grant, and Jimmy Stewart; it’s hard to know which guy to root for. All the minor roles excellent, too. (Make sure you don’t get the watery musical remake with Grace Kelly and Bing Crosby from 1956 — called High Society — ugh!)

Joan Fontaine — Rebecca (1940)
You’ll win a prize if you can figure out Fontaine’s character’s name in this classic psychodrama by Hitchcock (hint: it’s not Rebecca). Also a wonderful leading role spin by Laurence Olivier, if you want to see what your grandmothers were swooning over. Stellar supporting cast. If you like the movie, the book is even better. 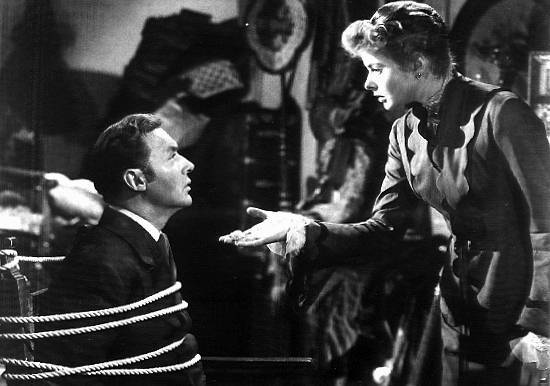 Ingrid Bergman — Gaslight (1940)
The vulnerable Bergman is lovely in her distress in this film. Although the plot is a bit thin, both she and Charles Boyer, her (mis)leading man, shine. Too bad Joseph Cotton is so stiff here.

Bette Davis — All This, and Heaven Too (1940)
Davis is a governess who accidentally sparks the French Revolution when she becomes embroiled in a battle of wills between a Duke and Duchess. Features some nice child actresses (including June Lockhart of later Leave it to Beaver fame). NOT available on Netflix! Let’s start a letter-writing campaign. [J.D.: I find this film tedious. It’s not available on Netflix because it’s not out on DVD.]

Orson Welles — Citizen Kane (1941)
No true fan of cinema should skip this movie. All of Welles’ films are scary in their single-minded, experimental genius; this is the least flawed among them. Pay attention to the groundbreaking camera work by Gregg Toland. And oh yeah, Welles is the lead actor, writer, director and producer of this amazing film. He was 26 at the time. [J.D.: Kane has some great moments and should not be missed, but the film d-r-a-g-s in its last act. Welles was 26! 26! It boggles the mind.)

Greer Garson — Mrs. Miniver (1942)
Director William Wyler made this movie about a British family in WWII to encourage the US to join the war against Germany. And it worked! FDR used part of the film’s dialogue to persuade the Americans that the fight was worthy. It’s cheesy patriotism but the casting is perfect and there’s a twist in the end. It will make you remember that there were wars for which we sacrificed more than just our tax dollars. Greer Garson also played a charming Elizabeth Bennet (opposite Laurence Olivier as Darcy) from 1940, and if you like movies about famous chemists, she’s a wonderful Madame Curie in 1943. (Unfortunately — neither available from Netflix, although Random Harvest, a decent alternative, is.)

Bette Davis — Now, Voyager (1942)
Ah, unrequited love. Davis’ transformation from over-mothered spinster to confident (and secretly fallen) woman is beautiful. Also a great scene where she gets to tell off her controlling mother. You may have never seen the leading man, Paul Henreid, in anything else, but he will capture your heart here. Be forewarned: very cheesy ending.

Ingrid Bergman — Notorious (1946)
What could be finer than Bergman and Cary Grant teaming up to fight the Nazis! Hitchcock balances the romance, character development and suspense in one of his best. Great camera work. Kudos to villain Claude Rains, too; at times, he steals the show and you feel sorry for him even though he is a Nazi!

Lauren Bacall/Humphrey Bogart — The Big Sleep (1946)
Ah, I long for the days when a leading man could be ridiculous-looking, and be named Humphrey, but still make the ladies pant. Don’t allow yourself to be confused by the plot (or lack thereof) in this one. Just enjoy the ride. None of the Bogart/Bacall movies have serious credentials; they existed merely as excuses to get this team together on the screen.

Irene Dunne/William Powell — Life with Father (1947)
Adapted from what was (at the time) the longest-running non-musical Broadway play of all time, a very cheesy family comedy set in 1883 New York. Good clean fun that will probably bore the pants off any young movie-viewer today. Lots of complaints on the Netflix site about the DVD quality on this and a few other older films. Sounds as though some film restoration is in order so we don’t lose classics like this one. [J.D.: This film is goofy fun. Some of the dialogue is as hilarious as you’ll ever find, especially when Mother explains her shopping rationale. And who can forget Father’s constant refrain of “I am not going to be bap-uh-tized.”]

Katharine Hepburn — Adam’s Rib (1949)
Had to include at least one Hepburn pairing with Spencer Tracy. Their off-screen romance permeates their acting. In this film they are husband-and-wife lawyers on opposite sides of a case in which a woman tried to kill her husband for infidelity. A wonderful examination of gender issues is woven through the slapstick. (My fave Spencer/Hepburn, Without Love, isn’t available from Netflix.)

Bette Davis — All About Eve (1950)
You owe it to yourself to see this film. Top-notch acting from the entire cast (including Marilyn Monroe in a minor role). Deliciously wicked. Has the famous “bumpy night” line. Don’t know what I’m talking about? Rent it. By now, the young attractive actress Bette Davis has morphed into the weird-looking later Bette Davis, but her acting became even more powerful as she aged. [J.D.: Despite some slowness in the middle, this is a great film. Excellent writing, and for a long time the film with the most Academy Award nominations.]

Grace Kelly/Jimmy Stewart — Rear Window (1954)
Edge-of-your-seat Hitchcock. This is such a classic that people refer to it in casual conversation; time to see the movie if you’re missing the allusions. Kelly’s cool beauty is a perfect foil to the clautrophobic suspense of voyeur Stewart trapped by his window with a pair of binoculars. [J.D.: I find this film dull; I much prefer Vertigo, which Kris hates.] 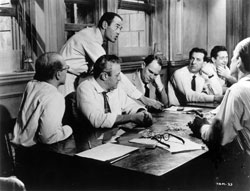 Henry Fonda — Twelve Angry Men (1957)
See, I can like a movie with all men! One of the best of all time. Pure psychological drama; you’ll be sweating along in the jury room and turning on the fan. Watch this one when you can savor the exquisite pacing and characterizations. No distractions, please. [J.D.: Kris first saw this film a year ago. She was raving about it as soon as the credits rolled.]

Elizabeth Taylor/Paul Newman — Cat on a Hot Tin Roof (1958)
Wow! This adaptation of Tennessee Williams‘ drama sizzles with sexual frustration. If you think Liz is only famous for her myriad marriages, friendship with Michael Jackson and malodorous perfumes, you owe it to her legacy to see this film. She didn’t get many meaty roles (typecast for her looks rather than her acting abilities) but she’s an absolute carnivore in this one. Me-ow! 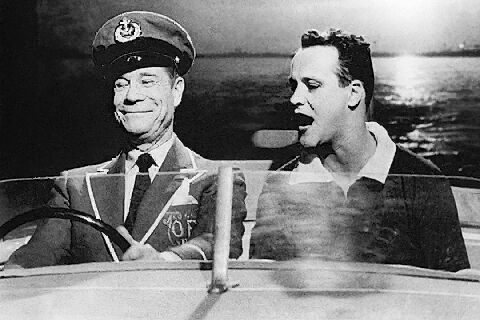 Marilyn Monroe — Some Like it Hot (1959)
This movie crackles with inside jokes and witty repartee. Monroe is mostly eye-candy, but charmingly so. Tony Curtis and Jack Lemmon provide most of the laughs, but the real star of this film is the screenplay by Billy Wilder. Even better the second time around. Although this movie is from the late-fifties, it could have been written in 1938, perhaps because Wilder had been working in films since 1929. [The funniest movie ever made — even the AFI thinks so. Even better the twentieth time around. One of my top three films of all time.]

Other notes:
A Lion in Winter (1968) — Too late to be in my fave era, but worth seeing if only for Katharine Hepburn‘s luminescent turn long after most of her contemporaries were long gone.

Notable absences:
Barbara Stanwyck: some love her, but I think she always seems like she has gas
Joan Crawford: ugh — too butch for me
Myrna Loy: I love Myrna Loy, but don’t really like the films she’s in. If you must try her, your best bet is the Thin Man series with William Powell.
Gone With The Wind: I just assume everyone’s seen this one. If not, take the day off work, rent the full version, and enjoy the War Between the States.

[Research for this entry was aided by the TLA Video & DVD Guide, a very handy reference.]