You’d think that autumn would see a decrease in wildlife activity in our yard, but sometimes it seems the opposite is true.

Filbert, the world’s fattest squirrel, is convinced that he should be able to snatch seeds from the feeder on the dogwoods. Filbert leaps onto the screen and scrambles around, looking for a hole that might be slightly larger than the others. Then he r-e-a-c-h-e-s inside with his little squirrely arm, trying to grab the goodies. 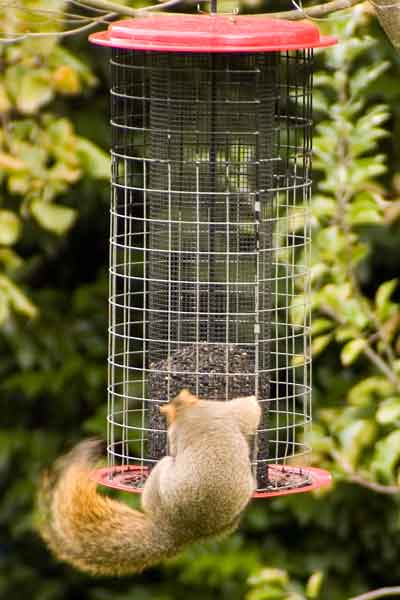 Filbert the Squirrel is certain that these seeds would be mighty tasty.

He is not successful.

The jays scold Filbert. “We can’t even get to that food,” they seem to say. “It’s for the little birds.” The little birds are none to happy with their rodent friend, either. While he’s dangling from the feeder, they’re unable to eat.

Meanwhile, there’s trouble at one of the birdbaths. The male flicker has been fluffing and flopping for several minutes, and a certain robin thinks that it’s about time she got a turn. “Get out. Get out,” she calls, and she makes several attempts to share the basin with him. 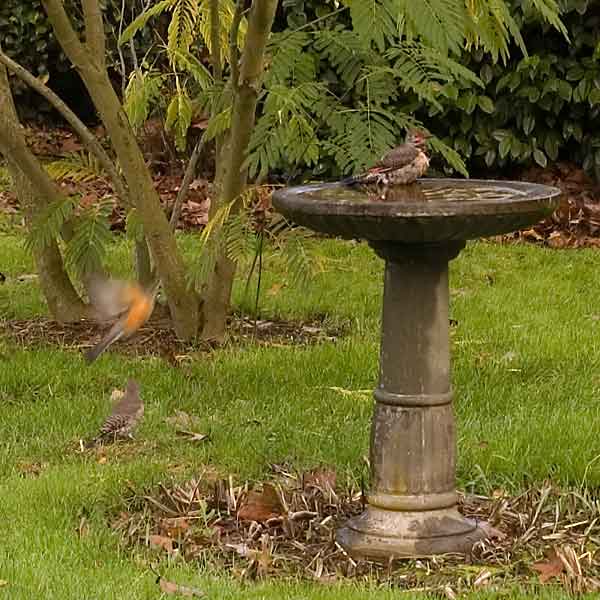 Though it’s difficult to make out in this photo, the robin is flying up to share the bath with the male flicker.
The female flicker is waiting patiently on the ground.

Unbeknownst to the robins and flickers and squirrels, there’s another wild creature about. Oreo, the cat from next door, is lurking under the hydrangea. While the robin and flicker are arguing over rights to the birdbath, Oreo makes a charge at them. He doesn’t even come close.

Poor Simon would love to be outside, too — he longs to taste the blood of a squirrel again — but his parents are just too mean. He can do nothing but sit on the kitchen counter and stare at the action. 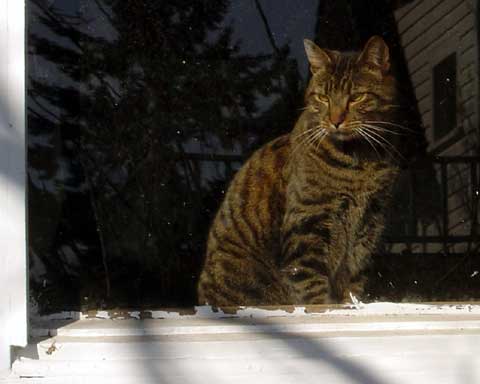 Simon thinks that we are unfair to cats.