Out of sheer laziness, I’ve begun to get my hair cut at Great Clips. It’s right next to Safeway, so it’s easy to go there when I’m picking up groceries. I don’t particularly care for their cuts, but Kris likes them. They generally give me the same cut every time, too, which is nice, because they’ve put my preferences into their computer.

Today, however, I got something…a little different.

When I walked in, I was pleased to discover there was no wait. Alexis was able to cut my hair right away. “How would you like your hair cut?” she asked, which I thought was odd, since the info is right there in the computer.

“Well, I usually get it clipper-cut on the side with a Four, and then I like it longer on top. Basically, I need a standard businessman’s haircut.”

“So you want about half an inch off the top?” asked Alexis, holding up my hair to illustrate. It was about two inches long.

Alexis began to fuss with her implements. “I hate this chair,” she told me. “It’s too far away from my stuff. My cord won’t reach.” To make things work, she had to spin me around so I was facing the back of the shop. We chatted briefly, but not much — just the way I like it.

“Do you use product?” Alexis asked a few minutes later.

“Would you like me to put some in your hair today?” she asked.

“And do you part your hair?” she asked.

When she spun me around to look in the mirror, I just about died. My haircut was not at all like we’d talked about. Alexis didn’t take half an inch off the top; she left half an inch. She didn’t give me a standard businessman’s haircut. She gave me some hipster doofus cut. I looked like…like…well, like this: 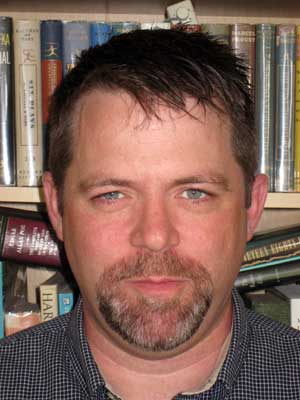 O, my fragile heart. What could I do, though? I tried not to look shocked, thanked her, and left a two-dollar tip. I walked over to Safeway to do my shopping, but the whole time I felt mortified, as if everyone were snickering at my new hair.

“It’s not so bad,” Kris said when I got home. How could she say that? For years, she’s been refusing to let me get a short haircut. And now I have one by accident and she likes it? It makes my head look like an enormous melon!

“I almost don’t want to go to the party tonight,” I said.

“Don’t be silly,” she said. “Go to the party. In fact, I’ll make a bet with you. I bet nobody says a thing about your hair.”

I went, and Kris was right. (Kris Gates is always right, isn’t she?) Nobody said a thing about my hair. But I know that they were snickering on the inside!