Julian B. Rotter developed the locus of control concept in 1954 as part of his social-learning theory of personality. Stephen R. Covey popularized the idea in 1989 with his best-selling The Seven Habits of Highly Effective People.

Like Mihály Csíkszentmihályi, Covey believes that we filter our experiences before they reach our consciousness. “Between stimulus and response,” he writes, “man has the freedom to choose.” Our self-awareness, imagination, conscience, and independent will give us the power to select how we’ll respond to each situation in life.

Covey says there are two types of people: proactive and reactive.

To illustrate the difference between proactive and reactive people, Covey discusses how we focus our time and energy.

We each have a wide range of concerns: our health, our family, our jobs, our friends; world affairs, the plight of the poor, the threat of terrorism, the state of the environment. All of these fall into what Covey calls our Circle of Concern.

Within our Circle of Concern, there’s a subset of things over which we have actual, direct control: how much we exercise, what time we go to bed, whether we get to work on time; what we eat, where we live, with whom we socialize. These things fall into what Covey calls our Circle of Influence, which sits inside our Circle of Concern. 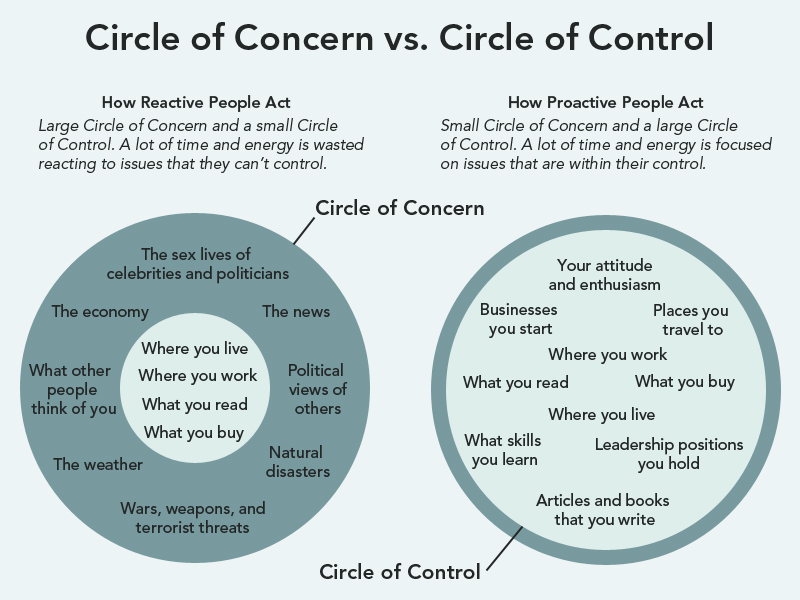 Any time you shift your attention from your Circle of Influence to your Circle of Concern, you allow outside forces to control you. You place your happiness and well-being in the hands of others. If you don’t act for yourself, you’re doomed to be acted upon.

But what about about luck? Aren’t there times when we really are at the mercy of the world around us? Of course. But our responses are always our own. Eleanor Roosevelt said, “No one can hurt you without your consent.” Covey agrees:

It’s not what happens to us, but our response to what happens to us that hurts us. Of course, things can hurt us physically or economically and can cause sorrow. But our character, our basic identity, does not have to be hurt at all. In fact, our most difficult experiences become the crucibles that forge our character.

Shit happens. Shit happens to everyone. Ultimately, who we are and what we become is determined not by the shit that happens to us, but how we respond to that shit. Remember Reinhold Niebuhr‘s famous serenity prayer:

Most people are reactive. It’s likely that you’re reactive too — at least to some degree. Don’t fret. I’m reactive also. But with time and effort, I’ve managed to shift from an external locus of control to one that’s primarily internal. You can too.

Focus on the things you can control. Use that control to remove constraints and complications from your life. Strengthen and stretch your Circle of Influence. This is the only path to changing your Circle of Concern. You have no control over the hand you’re dealt, but you can choose how to play the cards.

Here’s a simple exercise from Seven Habits: For thirty days, commit to working only on your Circle of Influence. How? Keep your commitments, to yourself and others. Don’t judge or criticize other people, but turn your attention inward. Don’t argue. Don’t make excuses. When you make a mistake, accept responsibility and fix it. Don’t blame or accuse. When you catch yourself thinking “I have to…” or “If only…”, stop yourself and choose to reframe the thought in a more positive light. As far as possible, accept responsibility for your circumstances, actions, and feelings.