If our lives are filled with fear, that may be due in part to the prevalence of internet, television, and radio. Our fears are fueled by the modern mass media, which makes money by highlighting extreme and unusual events.

Here, for instance, is the front page from Saturday’s on-line edition of USA Today: 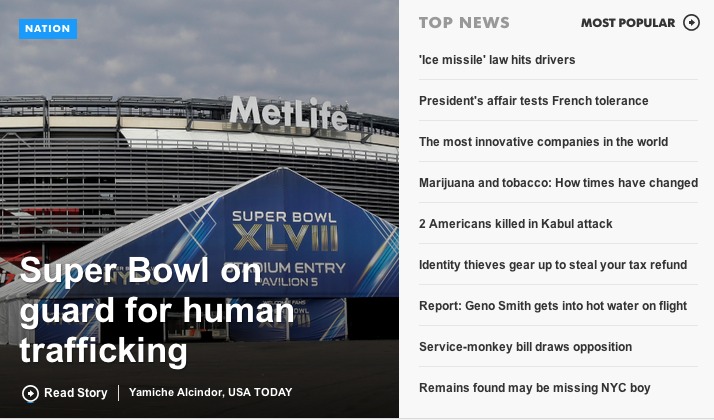 Headlines from the 18 January 2014 edition of USA Today

Human trafficking! Attacks on Americans! Identity thieves! Remains of dead boy! Elsewhere on the front page, there are stories about extreme weather, a new truck that burst into flames, the background of a high-school gunman, a gay teacher forced to resign, and so on. And this is a normal, uneventful day.

Note: I’ve written before that when it comes to investing, it pays to ignore financial news. Studies show that investors who receive no news perform better than those who receive a constant stream of information. Likewise, the people I know who pay less attention to current events tend to be happier than those who consume a regular diet of news. This is merely anecdotal, I know, but maybe ignorance really is bliss.

If you pay attention to the news, you might think terrorist attacks are common, bicycles unsafe, and that it’s dangerous to let children play unattended in the yard. Yet statistically, terrorist attacks are exceedingly rare, riding a bike increases your life expectancy, and your children are safer outdoors than you were when you roamed the streets twenty or thirty years ago.

The events in the news are newsworthy only because they’re the exception, not the rule. They’re statistical outliers. Yet because we’re fed these stories daily, we think these things happen all of the time. As a result, we’re afraid to live normal lives.

I have a friend who’s reluctant to leave her home. Because she’s been assaulted in the past — an unfortunate event, but a statistically unlikely one — she lives in fear of being assaulted in the future. It’s true that by appearing in public, my friend runs the risk of being assaulted again. It’s far more likely, however, that doing things outside the house would bring her pleasure and fulfillment.

To some degree, each of us is like my friend — but not as extreme. We are all filled with fears, and these fears hold us back.

To live a richer, more fulfilling life — a life without regret — you must first overcome your fears. You can start by exposing yourself to new experiences, by interacting with your environment and allowing it to change you.

It all begins with the power of “yes”.