Our yard is filled with birds. Since we moved in to Rosings Park, we’ve developed a passion for spotting and identifying birds. Kris is much more devoted to the hobby than I am, but I like it too. I like being able to recognize the call of the flicker, or to know that it’s the bushtits clustered on the suet feeder.

But for the most part, the birds don’t interact with us.

Sometimes a hummingbird will zip in for a closer look, but that’s only because she knows that we move like molasses. Last night there was a pigeon outside the kitchen who seemed very curious about us as we were preparing dinner. Usually if we’re working at the kitchen counter, the pigeons will fly away. This bird did not. And, of course, every summer the juvenile jays demonstrate a complete lack of fear toward humans.

Some people consider blue jays a nuisance bird, but I kind of like them. They’re cute. They’re also relatively smart. It’s fun to watch them interact with the squirrels and the other birds. Kris loves to give them peanuts to bury.

This spring, she’s actually befriended a jay (or pair of jays — we’re not sure). She calls him Sammy.

If Kris is outside, Sammy will fly in close to be near her. He watches her at work. She’ll be working in the roses, and Sammy will alight on a nearby branch. If she’s at the picnic table, he might sit on the gas grill. Or even on the opposite corner of the table. Kris and Sammy are buddies.

It’s quite possible that they’re only buddies because she carries peanuts, however. Blue jays like peanuts.

And cats like birds. Meatball, in particular, thinks that the new friendship between Kris and Sammy is exciting. It’s especially exciting to sit nearby when Kris throws a peanut into the lawn for Sammy to fetch. Meatball is convinced that what’s really happening is that Kris is trying to provide him a tasty snack.

The crazy thing is: Sammy doesn’t seem to mind cats. He’s a little wary, sure, and he doesn’t like to be charged by them, but mainly he’s just a gregarious little jay. While I was trimming hedges the other day, Sammy sat in the lowest branch of our mugo pine. He didn’t flinch at all as Simon spied him and crept closer. In fact, Sammy flew down to the grass, only six or eight feet from Simon, and hopped around doing bird stuff. Perhaps Simon was stunned by the bird’s brazen behavior. Or maybe he found Sammy’s actions worthy of respect. Whatever the case, he relaxed, and did not make a provocative move. So there we were: human, cat, and bird, hanging out like it was the most natural thing in the world.

On a final note, Sammy doesn’t actually eat all the peanuts Kris feeds him. Mostly, he hides them, but not very well. Recently, in a fit of desperation, he hid one in a rhododendron blossom: 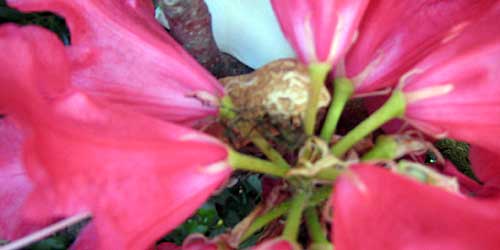 I don’t know what will happen with Sammy. It’s very difficult to tell one jay from another. But I hope that he’ll stick around for at least a few more months. He brings a little character to the yard.

Note: I hope to eventually capture some video of Sammy in action. No promises.