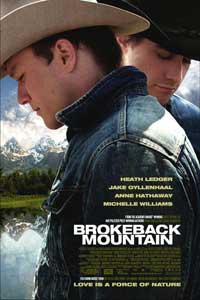 The Gates girls and I went to see Brokeback Mountain on Saturday. It was a good film, amazingly faithful to Annie Proulx‘s short story. It may be the best adapted screenplay I’ve ever seen, but all the same, I’m not sure the film is Best Picture-material. The cinematography was fine (though not as spectacular as I’d been led to believe), the acting was fine (especially Heath Ledger), and the script was fine (though it softened the story some). Yet the film lacked greatness. It felt mundane in parts. If it were not a story of a homosexual love, it would likely considered unremarkable.

However, the film is a story of homosexual love, and is groundbreaking as the first major film to tackle these issues, to be produced with such quality, to garner such attention, and to achieve such critical acclaim. Maybe this context is enough to elevate the film to greatness. I don’t know. (My cousin Nick tells me he found the film incredibly sad, heartbreaking. He dreamed about it. Perhaps if I had not read the short story beforehand it might have affected me more.)

Because the film is so true to the story on which it is based, it’s interesting to note how differently I react to the two media. I first read the story a couple of years ago, and then re-read it after viewing the film. Each time, the story struck me like a hammer: it’s powerful, dense, and moving. It’s a finely honed piece of fiction. It’s focused.

The film exhibits some of these same qualities. At the same time, the film fleshes out certain story elements. In the story, which is primarily told from Ennis’ point of view, we only hear about Jack Twist’s life in Texas. We never see it first-hand. The film dramatizes Jack’s life, adding details that were only hinted at on the page. In the story, Alma plays a small but important role. She’s effectively de-emphasized, though, through skillful writing. It’s less possible to do that on the screen. I liked the actress who played her (though I don’t know who she is), and found myself paying more attention to her in the movie than I did in the story. I wanted to see more of her (as a character), to know more of her situation, to be shown more of her point of view. The movie felt especially strong when it was dealing with her reactions. I liked the screen Alma better than the story Alma.

I admit that I was worried that the scenes of hot gay sex would make me uncomfortable. There was only one such scene, and it was filled with shadows and textures, not remotely as graphic as the straight sex scenes found in many modern films. The scene did make me uncomfortable, and that’s my problem, but I dealt with it. (I long ago became inured to seeing two men kissing, but anything more makes me squirm. Does this make me homophobic? Does this make me gay? I think it means I’m normal.)

Brokeback Mountain is a good movie based on a great short story. You should read it. You can find it in the fantastic Scribner Anthology of Contemporary Short Fiction (the best short story compilation I’ve ever read) or in Close Range, an Annie Proulx collection. (Also, I’ve posted a plaintext file of “Brokeback Mountain” here.)

Kris and I have now seen two probable Best Picture nominees (the other being Capote). Both films were good, but not spectacular. We each agree that our favorite film of 2005 so far is Crash. (Crash was also Roger Ebert’s favorite of 2005.) Other 2005 films we may see in the coming weeks include: Hustle & Flow, Crash (again), The New World, Munich, Syriana, and Walk the Line.

Films coming soon that I am anxious to see include (links lead to trailers): She’s the Man (yes, really), The Fountain, Tsotsi, The Three Burials of Melquiades Estrada (actually a 2005 film).