Before I moved out of the house and into my apartment, my cousin Nick paid a visit to play board games. After some rousing Carcassonne and Ticket to Ride action, I gave him a brief tour of my geek room, which was home to my board games, science fiction novels, and comic books.

“Your comic collection is growing,” he told me.

“I know,” I said. We talked about the process of building a collection while I showed him some recent additions. “These comics cost a lot of money,” I told him, “but it was much less than if I’d bought them piece by piece.”

Like me, Nick has been a collector his entire life, so he understood what I meant. But while I’ve collected comic books, he’s collected stamps and coins. We may not be able to compare notes on our specific collections, but we have a good time discussing the process of collecting itself. Nick, too, tries to collect on the cheap.

No matter what you collect, there are ways to enjoy your hobby while spending less. Here are some of the ways I’ve learned to keep costs low after four decades of collecting.

Note: My examples below will involve collecting comic books, but they’re applicable to most other collections, as well.

Narrow your focus
Know what you’re collecting — and why. One problem with collecting is knowing when to stop. This topic came up recently at my favorite comic-book discussion forum. “At what point do you have to say enough is enough?” asked one member. How do you know when your collection is finished? How many Magic cards do you need? How many autographs? How many canning jars? How many Hummel figurines? If you don’t have a defined stopping point, your collection will never be finished.

When I was paying off debt and building savings, I cut back on my comics spending. Instead of buying everything I wanted, I decided to focus on my favorite niches. For several years, I almost exclusively bought collections of comic strips. Because there weren’t many of them, I could afford to buy almost all of the anthologies being released: Peanuts, Dick Tracy, Little Orphan Annie, Bloom County, and so on. By making my collecting more specific, I was able to indulge my hobby on a smaller budget.

Look for sales
Yes, even collectibles go on sale. When I finally found the cash to start collecting comics again in 2009, I was fortunate to discover a place that was selling back issues at 50% off their regular prices. And my favorite local comic store (Excalibur Comics in Portland — that place rocks!) regularly has 50%-off sales. I’ve been able to pick up tons of my favorite comics from the 1970s at a buck a piece. Yes, please!

Find dealers you can trust 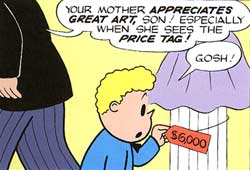 Try to find someone with tight grading standards. Most collectibles — including comic books — are priced based on their condition. For instance, comic book conditions can be classified as Poor, Fair, Good, Very Good, Fine, Very Fine, Near Mint, and Mint. But not everyone grades the same way. What I call Good, you might call Very Good, and somebody else might call Fair. Steer clear of dealers who claim a Good comic is Very Good (or Fine!); gravitate toward those strict graders who will sell you a Good comic for the price of one that’s only Fair.

Believe it or not, Kris collects canning jars. She and a friend share this passion, and often swap tips. They’ve also found a jar dealer they trust (though the guy is a bit of a nut). They’re willing to drive out to see him because they know he has good jars. (Here’s a story about Kris’ canning jar collecting.)

Scout unusual sources
Check out yard sales, antique stores, flea markets, and auctions. If you’re patient, you can sometimes find great deals. Once at a garage sale, I found a box of comics from the 1960s in great condition. Unfortunately, this was at the depth of my debt despair. I couldn’t afford a single one. In retrospect, I’ve always regretted not finding a way to just offer a set amount ($20? $100?) for the entire box. There would have been no harm in asking.

While Kris and her friend collect canning jars, their dealer is even more obsessed. He has a house full of them. (As I say, he’s a bit of a nut.) He goes to estate sales and asks the people if they have any home-canned food in the pantry they’d sell him. He then eats the food and adds the jars to his collection.

Settle for less
Go for the minimum condition you can live with. Some collectors want their objects to be in perfect condition. They pay a premium. If you’re willing to settle for second-best (or third-best or fourth-best), you can have highly desirable objects for cheap.

I’m willing to accept Poor quality comics, for instance. Much of my collection is simply Fair or Good. These are the comics most other collectors reject. But you know what? While they’re paying $5000 for a copy of Fantastic Four #1, I paid $500. Sure, mine is falling apart. I don’t care. I read it and enjoyed it.

My cousin Nick collects ancient coins. He’s not willing to pay top dollar for the best pieces either. In fact, he buys bags of “uncleaned coins” — basically hunks of metal caked with centuries of dirt and grime — and slowly removes the patina in order to discover what’s underneath. Most of the coins he finds this way are common, but he’s also discovered some gems. Because he’s willing to accept poorer quality, he pays far less than he otherwise might. 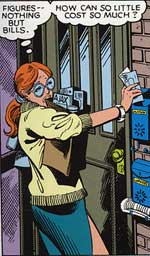 If you have the cash flow, consider buying large lots just to get at a single piece. Buying large lots is generally a much better deal than buying individual pieces. The drawback, of course, is that you usually get stacks of stuff you don’t need. You either own the other pieces or you don’t want them. This can make buying a large lot to get at a single piece a bad idea, especially if the cost is high.

But if you have plenty of cash, you can actually make a profit doing this. For a while, I was targeting old Wonder Woman comics, for instance. Sometimes the only way to get the comics I was after was to buy six or eight at a time, including several I didn’t want or need. I did this, but then set the others aside to resell. (I haven’t actually resold anything yet, but I have a huge stack of stuff I’ll liquidate when I get the time. In the long-term, this should be very cost effective.)

Avoid temptation
I spend less money on comics when I stay out of comic shops and when I avoid comic blogs. I spend less on board games when I intentionally avoid learning about new games. (I went for years without buying new games, and I was perfectly happy. Now I’ve bought several in the past few months. Hanging out with Adam Baker has just made the urge to splurge grow stronger. He’s loves board games too.)

Be patient
When you find that one thing you’ve been waiting for in order to complete your collection, it can be tempting to buy it immediately. Don’t. Make sure you’re getting a good deal. As a collector, you need to know the market, you need to know what things are worth. And as a collector, you’ll spend far less if you’re willing to wait for the right item at the right price.

This can be easier said than done, of course. When you stumble upon a missing link, you can be afraid you’ll never find another one again. You want to buy it now, now, now. Train yourself to be patient. Know your price points. Be smart.

Borrow
Sometimes you can satisfy your urge to collect by borrowing and sharing. In my case, I was able to curb some of my craving for comics by making use of the public library. The local library system stocks some expensive hardbound compilations. Since the library owns and stores them, I don’t have to. This principle can work for other types of collections, too (though admittedly my comics situation is close to ideal).

Or maybe you have a friend with a similar interest. Maybe she collects Wedgwood pottery too. Instead of both buying the same pieces, you could build a short of shared collection, lending items to each other from time to time. 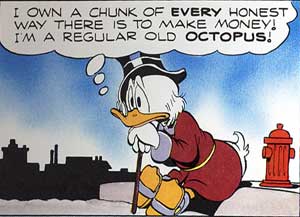 In general, collecting is not a frugal hobby. My collecting habits have been a constant drain on my bank account. I’ve come to believe that collecting is merely a form of hoarding. It’s a socially acceptable way to acquire Stuff.

As with anything, though, it’s okay to collect in moderation. But if you find yourself being sucked into your hobby, that can lead to problems, both mentally and financially. Again, I say this as one who’s been there (and may still be there). If you’re going to collect, do it right.

I wrote the bulk of this article last June. Because I’ve made some major changes to my life since then, I’ve actually called into question my own tendency to collect. If I want to travel, and if I’m going to live in an apartment, is there really a place for building a collection? What’s the point? Why don’t I “outsource” the collecting — to the public library, for instance.)

Over the past few months, I’ve put the brakes on my own collecting habits. I’ve spent $0 on comics since September, and the only books I’ve bought have been for specific purposes (learning Spanish, our monthly book group, etc.) That’s not to say I’m ready to give up collecting completely, of course, but maybe I can finally spend some time reading all of the books I’ve bought before!

I’m actually curious how many GRS readers are collectors. What do you collect? And how do you do it? What strategies do you use to keep costs down?