So, I suspect most of you have already seen this fun YouTube clip of the ninja cat who seems to move without moving (if you get my drift):

It’s been a while since I gave an update on my own feline companions. Let’s examine each in turn: 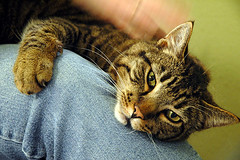 Simon has become a mellow lug. He’s about seven now, and though he still enjoys Outside, he’d almost prefer to stay in most days. He’s quite fond the clothes basket. In fact, Kris has created a basket of clothes just for Simon. She even washes them once they get too furry. Simon loves cereal milk. That cat is spoiled. 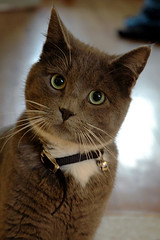 Max, however, is convinced that he’s meant to live Outside. He comes in to say “hello”, but then he wants right back out. He even stays out many nights. I’m paranoid that he’s going to get run over. We have a very low traffic street, but Max takes unnecessary risks. He doesn’t look before crossing — which he does often — but just darts across. Max loves human food of all sorts. That cat is spoiled. 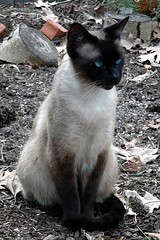 I used to think Nemo was lame. In fact, I still think he’s pretty lame. But I’ve decided that I’m underestimating him. He’s a much better hunter than I give him credit for, that’s for sure. He’s kind of a jerk, too, though. For whatever reason, he’s decided that the best thing in the world is to beat up Max. We came down one morning last week to discover tufts of grey fur floating around the floor. But Nemo’s favorite thing is to curl in Kris’ lap while she watches Edwardian costume dramas. That cat is spoiled. 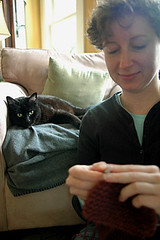 Toto is basically a giant hairball. She licks herself constantly, which she has to do because she’s always shedding. I’m surprised she has any fur left. She spends most of her day on the bed when we let her, which isn’t often because she throws up a hairball once or twice a week. Toto’s favorite thing in the whole world are the three “greenies” cat snacks that Kris gives her before bed every night. Then we turn out the lights and she cuddles up between us, purring like crazy. That cat is spoiled.

And that, my friends, is all the cat news I can spare. Now I need to get back to writing my book!