I was standing on the tarmac last night, waiting for my backpack to be brought from the small commuter plane I’d just taken from Seattle, when my good friend Chris Guillebeau appeared at my side. “Hey man, how’s it going?” he said, shaking my hand.

“Holy cats!” I said. “What are you doing here? I thought you were in Angola.”

“And Dubai and Madagascar,” Chris said. “But I just got back. I’ve been traveling for 47 hours. What about you? Where have you been?”

“I was in Colorado for the Savvy Blogging Summit and then in Seattle to speak about personal finance to videogame developers,” I explained. “I wish I’d known you were on this flight.” 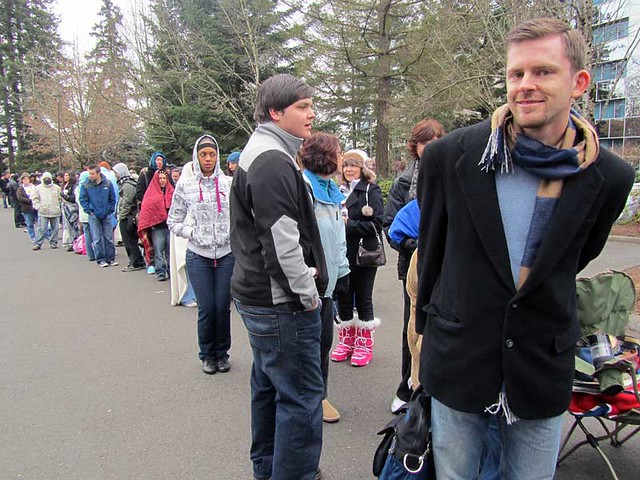 Chris Guillebeau, in line for our attempt to audition for The Amazing Race last February.

We grabbed our bags and started the long walk to the exit. Chris told me about his most recent adventures. He’s been traveling the world for several years now, pursuing a quest to visit every country by the time he turns 35. He only has a couple of years left now, and the remaining countries are becoming more challenging to get to. I’d already read about his adventures in Angola and how cold it was in South Africa, but I hadn’t heard about the latter parts of the trip.

“I ran out of cash in the Comoros,” Chris said. “That hasn’t ever happened before. Maybe I’ve grown too cocky. I didn’t have enough cash to enter the country, so they confiscated my passport. I had to pick it up when I left.” But even that wasn’t so simple. (I’m sure he’ll tell the whole story over at The Art of Non-Conformity before long.)

When we reached the waiting area outside security, Jolie was waiting for Chris. She burst into a smile when she saw him and ran to give him a hug. Then she saw me and stopped, puzzled. “What’s J.D. doing with you?” she asked.

“He’s been with me since Madagascar,” Chris joked.

I offered to give the Guillebeaus a ride home, so we hopped on the shuttle to long-term parking, where our driver was a mildly retarded but very friendly man named Bob. He shook our hands as we entered, and then cracked silly jokes all the way to the lot. (“What do you get when you cross a turtle with a porcupine?” “A slow poke!”)

As we drove into Portland, we talked about plans for next year’s World Domination Summit. How big should it be? Where should we hold it? What date? Who should speak? Chris also told me about his upcoming seven-continent book tour. “My goal is to have the best-selling book on Antarctica,” he told me.

“I’d love to go with you,” I said. “Maybe mine could be the second best-selling book on Antarctica.” We laughed at that and hatched some plans.

I left my friends at their doorstep and drove home happy. Real Life has some challenges in store for me this week. The next few days will be tough. But I awoke this morning with a smile on my face because last night I got to spend an unexpected hour with friends. What a fine way to end five days of travel.