Oak Grove was once — long ago — a thriving community. Back when the trolley line ran through the “downtown” area, the neighborhood supported a number of businesses. Many of those storefronts still remain, but since the trolley left in 1959, Oak Grove has struggled to keep the businesses around. Folks head out to the Superhighway (as 99e was once known) or into downtown Milwaukie.

Kris and I like to support the handful of businesses that do try to make it in downtown Oak Grove. I’m a too-frequent customer at the convenience store on the corner of Arista, where the owner Joe and I chat about books and politics as I buy my diet soda and sugary candy. And Kris loves the Oak Grove Coffeehouse, the neighborhood’s only real business of character.

Jason started the Oak Grove Coffeehouse a couple of years ago, and though business seems tepid at times, it seems to be enough to keep the doors open. I think it helps that Jason and his staff have become sort of community hubs. The coffehouse puts on “open mic” nights, hosts art shows, and more.

For reasons that are opaque to me, the Oak Grove Coffeehouse hosted a fund-raiser last Saturday. Okay, the fund-raiser part I understand; it’s the type of fund-raiser that baffles me. On Saturday, the OGCH held a Star Wars-themed barbecue. Seriously.

Kris and I didn’t stop by, but because we’re fans of the store on Facebook, I was able to see photos of the event, including this one, which cracks me up: 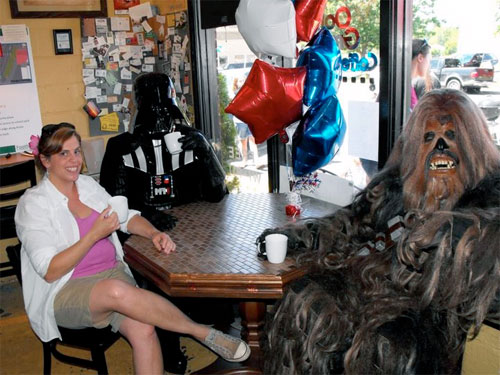 Such a hilarious photo. I’m not sure how Darth Vader is going to get that coffee through his ventilator, but it sure looks like he’s going to try!