So, I made my first batch of chantico tonight. Using just one-half of one of the three bags of Starbucks chantico mix mailed to me by a foldedspace reader, I brewed some drinking chocolate. 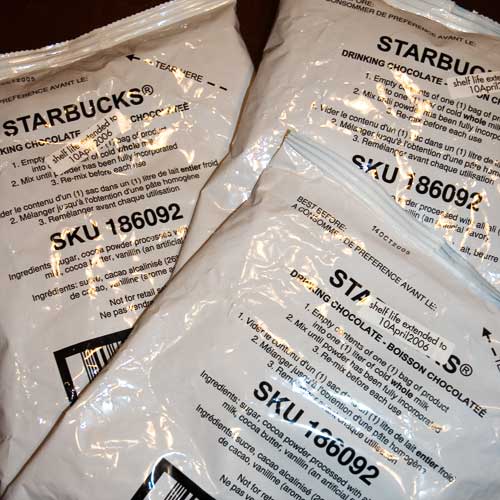 First, here are the stats from the bags:

Not for retail sale. Product of Holland. Net weight 750g.

Lord, how I wish I’d taken photographs of this adventure.

I knew that I didn’t want to fix an entire bag of chantico, but I couldn’t decide how much would be enough for an after-dinner treat. Half a bag? One quarter of a bag? I measured out 375g of mix and called it good enough.

I was alarmed already.

We don’t own a milk steamer, and I’m rather anti-microwave (yes, really), so I mixed the stuff in a pot on the stove and brought it nearly to a boil. I say nearly because it soon became clear that heating this stuff too much too quickly was going to burn it. I backed off on the heat and poured myself a mug.

Yum. But not hot enough.

I microwaved it for twenty seconds, then sat at the table and sipped. The first mug was so good that I poured a second. And a third. I heated a mug for Kris, too. She’s shared sips of my chantico before, but has never had one of her own. She was shocked by the overwhelming chocolate experience. “This is undrinkable,” she said. “It’s like chocolate soup.” She diluted her mug with some skim milk. (Sacrilege!)

Midway through the third mug, I realized the folly of my ways. My mouth was coated with cocoa butter and vanillin. I felt as if my digestive track had turned to liquid chocolate. I groaned and stumbled to the kitchen, swigged skim milk directly from the carton.

To summarize: one bag of chantico mix and one liter of whole milk will make approximately eight six-ounce servings, which Starbucks once sold at $2.65 a pop. Unfettered by that price, granted unrestricted access to the stuff, the most I could drink was three servings before feeling sick.

I now plan to share the rest of my hoard, to parcel it out in small doses.

(Actually, I think my next step is to try a one-to-one ratio, mixing half a cup of chantico mix with half a cup of whole milk, stirring it, and then microwaving the stuff. I’ll bet that this results in about six ounces of drinkable chocolate without being quite so overwhelming.)