It has come to my attention that a certain mother-in-law would like to see some photographs of the changes we’ve made at Rosings Park over the past six months. I am happy to oblige.

Our big project this year was, of course, the bathroom remodel. I documented that never-ending task in this weblog (before, beginning, middle, end), but I never shared photos of the finished product.

Kris and I each got something we wanted in the room. I got a long clawfoot tub in which I spend a lot of my spare time. It’s fantastic, except on cold winter mornings in which case it is like a sheet of ice. Kris designed her dream vanity and had it built to order. She loves the granite-like surface (the name of the material escapes me).

We recently made another large expense when we purchased a new range. The range that came with the house was old and unreliable. It took half an hour to preheat the oven to 425, and even then it might not hold that temperature. Baking was a crapshoot, and cooking on the stovetop wasn’t much better. We like to entertain, so we figured it was worth splurging for a nice range. After Paul and Amy Jo raved about their double-oven, we opted for something similar.

Our new range has two ovens. The upper oven is small, as you can see, but it preheats quickly and is perfect for cookies and pizzas and everyday use. The bottom oven is more traditional. Both can be used at the same time. The stovetop features a continuous grate, which is quite nice. We don’t like the placement of the knobs, but that’s really the only drawback of this range.

Our final expense was a light for the study. As I’ve mentioned many times over the past year, I’ve coveted this art deco light from Rejuvenation: 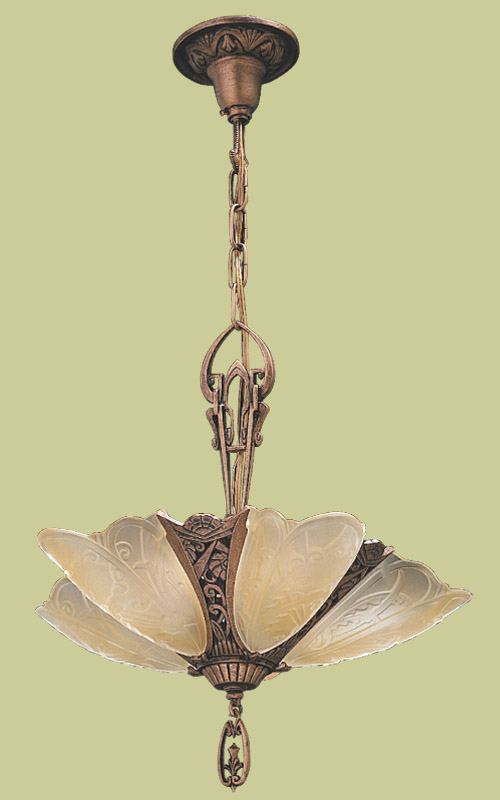 Kris thinks it’s frou-frou, though, and the slippershades (and the fixture itself) are quite expensive. Also, it’s a custom-order item. When I discovered another light fixture upstairs in the seconds department, I surrendered to practicality.

Actually, I like this compromise fixture for several reasons: the antique gilt finish is nice, similar to that on the slippershade fixture; the styling of this fixture matches that of the other two we installed in the house, and is more period appropriate than the slippershade fixture; this fixture — which normally would cost much more than the art deco fixture — cost less than my first choice because it (and the shades) were half-off in the seconds department; and this fixture puts out a lot of light, which is redirected from the ceiling &mdash: it makes the room feel cozy.

We have spent a hell of a lot of money on the house this year. In fact, despite my newfound frugality, I’ve been struggling to stay above water financially. Kris and I have agreed that we will make no major (planned) expenses of any sort next year. That ought to give me a chance to build up some savings and to mentally begin to feel like things are under control.

Meanwhile, the wildlife outside our house continues to entertain.

You may not be able to tell it, but this little guy is quite pleased because the cats are all inside. (The cats, however, are unhappy.)