For the past two nights, I’ve been lodged at the Royal Inka Hotel with the thirteen other members of this tour group. We’re at the start of a 21-day trekking tour of Peru and Bolivia. 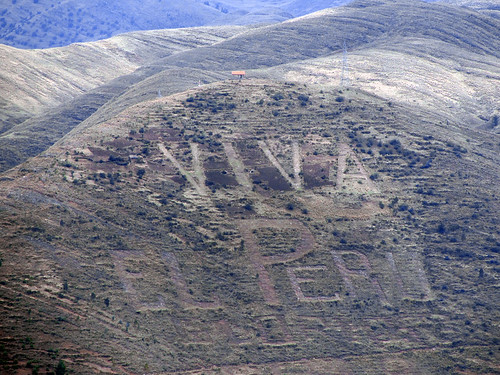 Yesterday, we had a standard tourist tour of the town. There’s not a whole lot of story to share, so I thought I’d show some photos instead. Here’s a chronological diary of our day. 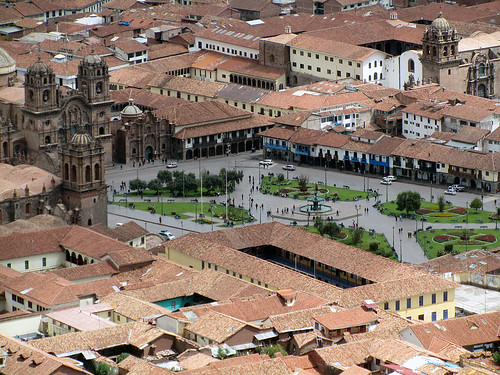 Plaza Kusipata
The Royal Inka Hotel is located on the Plaza Kusipata, just one block from Plaza de Armas, the center of Cuzco. It’s a nice place. (Nicer than I need — I don’t need fancy places to stay. This isn’t fancy, but it’s nice.) 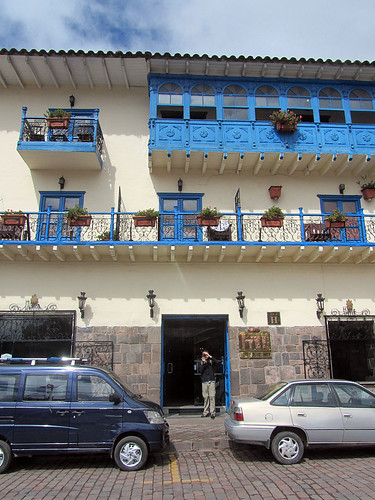 Plaza Kusipata is busy day and night. It’s a popular place to hang out, and a crossroads for commuters of all sorts. Teenagers laugh and wrestle and flirt. Young couples sit together on benches. Dogs wander the square, like the cats of Miraflores. Tourists like me take photos. And women wander to and fro, trying to sell hats and boxes and bracelets and more. 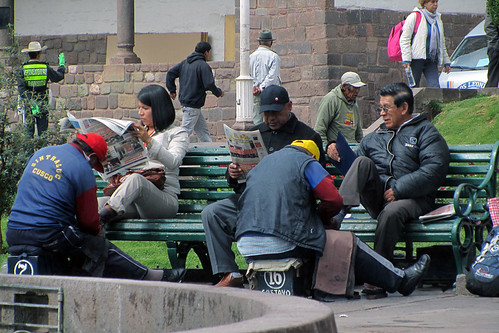 As in many cities around the world, vendors set up stalls on sidewalks (or simply walk around selling their goods). At first it’s easy to feel guilty for not buying, but eventually you learn to avoid eye contact, say “no gracias“, and keep walking. If you engage the sellers in any way, they become very persistent. 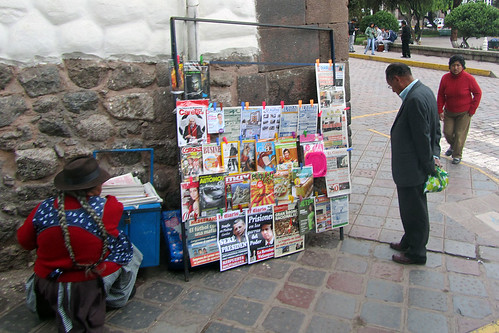 Qorikancha
In the morning, our group ventured up to Qorikancha, the ancient Temple of the Sun, the most important temple in the Inca Empire. As with all things in Peru (and Latin America), the Spaniards pillaged the temple when they arrived, eventually constructing the Church of Santo Domingo on the site, destroying much of the original temple. 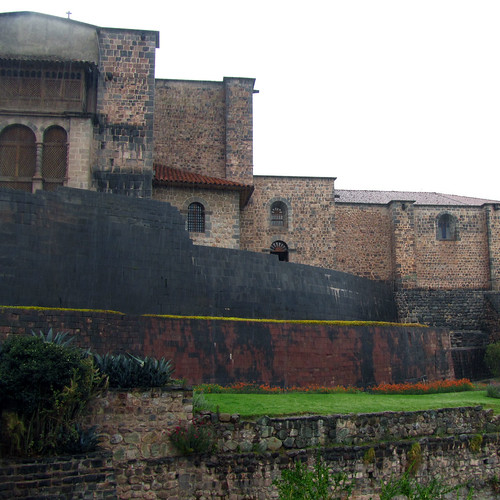 Qorikancha and the Church of Santo Domingo 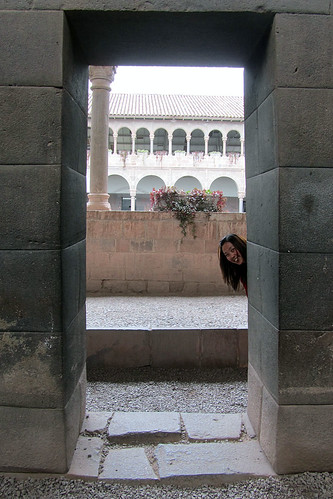 Grace peeks around a corner in Qorikancha 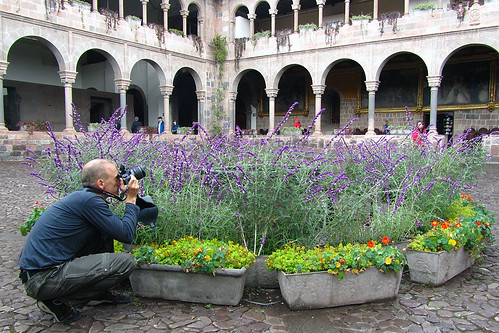 The Inca worshipped the heavens, and the sun most of all. Qorikancha had rooms dedicated to the sun, the moon, rainbows (arco iris), lightning, and more.

My favorite part of the tour, though, was this modern painting of the heavens. I think it’s absolutely brilliant. I’m not always much for the visual arts, but this blows me away. So beautiful. Simply mesmerizing. 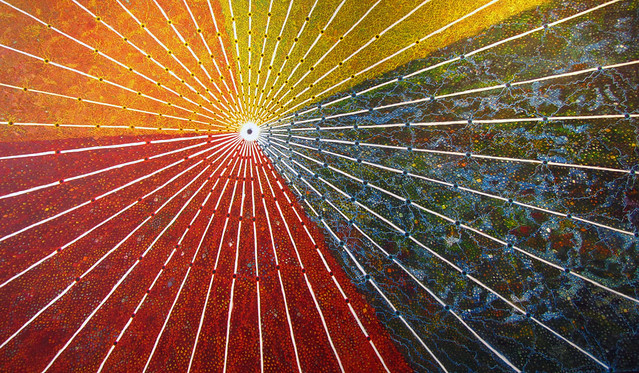 This painting hangs in Qorikancha but is uncredited

Saqsaywaman
After touring Qorikancha, we headed up a nearby hillside to the site of Saqsaywaman (which English-speakers bastardize into “sexy woman”), a walled complex made of carefully carved boulders. We didn’t get a chance to photograph the main edifice side-on, so my photos below show only small details. 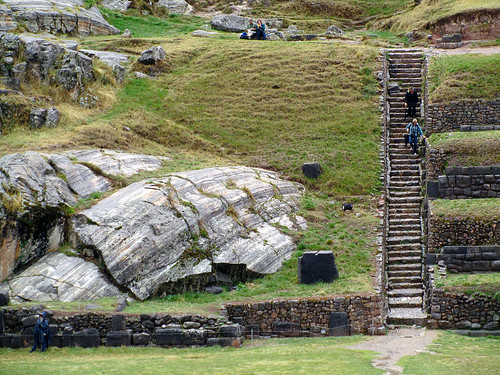 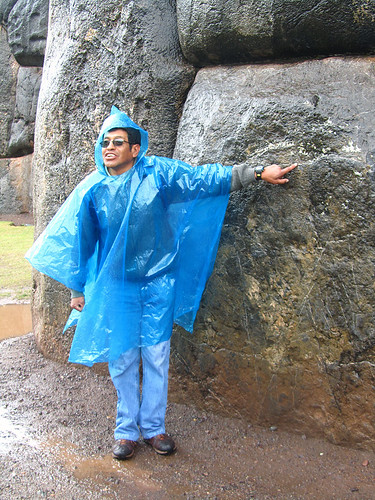 Our guide, Gustavo, describing the construction of Saqsaywaman 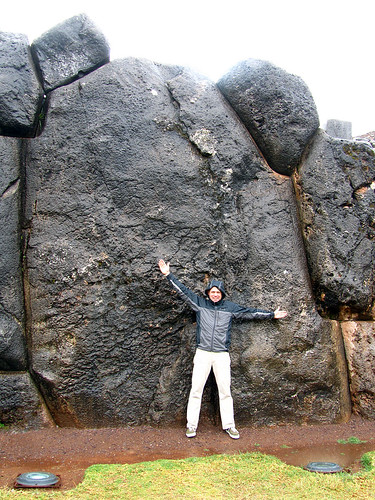 Me, posing to provide some scale for the size of the boulders

There was a herd of alpacas wandering around Saqsaywaman. They seemed completely indifferent to us. And they were sopping wet from the rain. 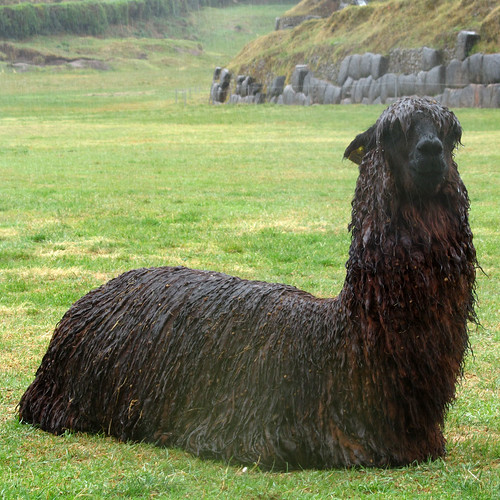 A bored alpaca — after all, what does an alpaca have to look forward to?

Q’enqo
Our final stop of the day was to Q’enqo, the smallest site we visited, but possibly my favorite. For one thing, I got to chat with the bus driver about why there were muñecas dangling from the trees. 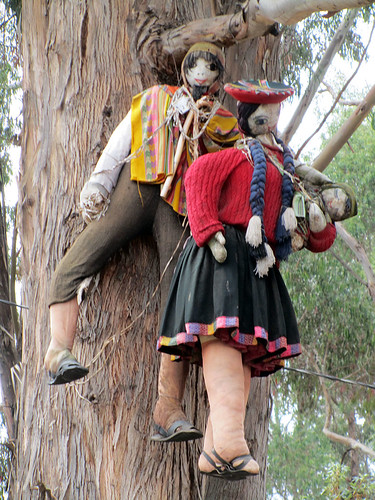 Dolls (muñecas) hanging from the trees at Q’enqo

He told me these were for Carnivale, which is celebrated every February. These muñecas represent a mother and a father, though I forgot to ask the purpose. (And why they were hanging at Q’enqo, an ancient Inca burial ground.) I did however ask about el día de los muertos, which I know is coming up. (And actually, I had that wrong, because in Peru it’s el día de todos los santos.) But he told me something about el día de todas las almas that I didn’t catch. (The former takes place on November 1st and the latter on November 2nd.)

Anyhow, Q’enqo was an important burial spot. It’s a small labyrinth carved from massive stone outcroppings. I liked it. 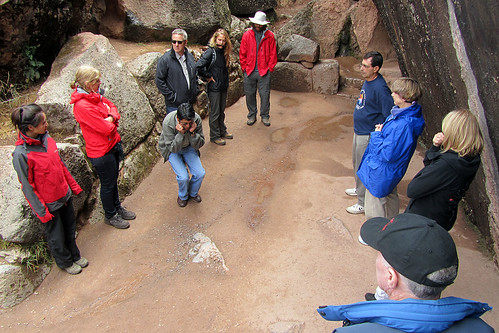 Gustavo explains that people were mummified in a fetal position.

In the afternoon, the group had a fine lunch at Pacha Papa. I got to practice my Spanish: “Voy a probar la chicha morada,” I told the waiter. Chicha morada is an Andean drink made from purple corn, cinnamon, and other ingredients that I don’t know. It wasn’t bad. For my lunch, I ate adobo de costillar de chancho, a sort of pork-rib stew. (My god, but Spanish has a zillion words for pig!)

After lunch, I joined Brad and Grace for a little pre-trek shopping. It has been very rainy and cold here (it’s the equivalent of early April in Oregon), and I’m heeding the advice to buy a pair of rain-proof pants. Plus, I didn’t bring my trekking poles since they wouldn’t fit in my bag and they’re not allowed as carry-ons. I bought a trekking staff for 40 soles (or about $15). I’ll give it away at the end of the trip. 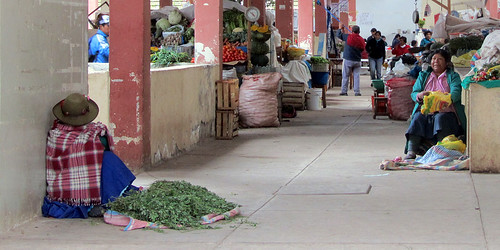 A market in Cuzco, Peru

Brad was craving coffee and I was craving un dulce so we stopped at Inka…fe, which is an hilarious pun, in my opinion. (I can’t wait to tell my tutor about it.) I ordered maté de coca — hot tea made from coca leaves, the very same plant used to produce cocaine. I’ve only been in Cuzco for 48 hours, but I’ve consumed about a gallon of this stuff. (No joke. It’s everywhere.) Plus, I had a piece of chocolate cake with lúcuma ice cream. (The lúcuma is a Peruvian fruit that tastes like…well, I can’t describe the taste, but I like it.)

And then, my friends, I came back to the hotel to write. Instead of exploring the town, I wrote about what I’ve seen.

After three hours of work, I headed out into the cold night. The Peruvian national football team had an important match against Paraguay (their first World Cup qualifier maybe?), and I wanted to find a pub where I could watch the match with the locals. I ended up eating eating a bowl of onion soup while sipping a curuba sour. (I’ve come to love passion fruit.)

Peru won the match by a score of 2-0. Everywhere you went around Cuzco, people were watching and listening to the game. It was awesome. ¡Viva el Perú!

Note: Yesterday’s touring actually made me realize I have a question I’d like to research: To what degree was the European Renaissance made possible by the rape of the Americas (and the rest of the world)? I’m not sure of timeline, but that which I can remember makes me think this quite likely. (Ha! “lo que” == “that which” — Spanish phraseology creeping into my English writing!) Here’s an interesting juxtaposition: Today we toured sites that used to be filled with vast wealth: gold and silver and jewels. Almost exactly a year ago, I was touring the Vatican, a complex that is quite literally filled with the remnants of this vast wealth, perhaps some of the same gold, silver, and jewels. No me gusta.