After my first night’s misadventure with the taxi, I was a little nervous about what to expect in my first full day in Lima, Peru. Fortunately, things worked out just fine.

After scolding me for not finding him at the airport, Manolo — the agent for the travel company — asked me what I planned to do with my free day. “I don’t know,” I said. “I may just wander around Miraflores. But maybe I’ll try to head downtown. Is it walkable?”

“That’d be great,” I said, so we headed out together. Taxi rates are much more reasonable when you have a Peruvian asking for the fares. Instead of 95 soles from the airport to Miraflores, it only took 14 soles to get downtown (and the distance was about the same). We wended our way through the chaotic Lima traffic, traffic that’s much more of a mess than any city I’ve ever been to. Worse than New York. Worse than Rome. Worse than Paris. I would not want to drive here! But at least I learned some new Spanish swear words. 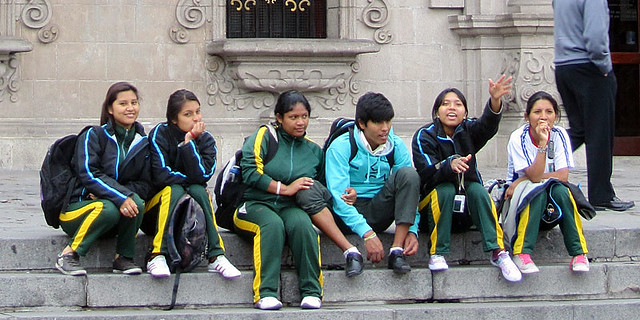 On the steps of el Palacio Arzobispal de Lima

Manolo and I spent about five hours together in the center of Lima looking at churches and tiendas and watching the changing of the guard at the Palacio de Gobierno. We paid seven soles to take the guided tour of the Museo San Francisco, a sixteenth-century Franciscan monastery.

Longer ago, this church served as Lima’s cemetery. When people died, they wanted to be buried beneath it. “They thought it would bring them closer to heaven,” Manolo told me. “But it wasn’t true.” He was raised Catholic, but doesn’t know what to think now. (He’s been dabbling with Mormonism over the past few years.)

As we followed the small group from room to room, we chatted in both English and Spanish. I asked Manolo a little bit about himself. He’s from Aguage, a small town near the jungle city of Iquitos in the north of Peru. He’s been studying tourism for the past few years, but it’s slow going because he can’t always afford the classes he wants to take. 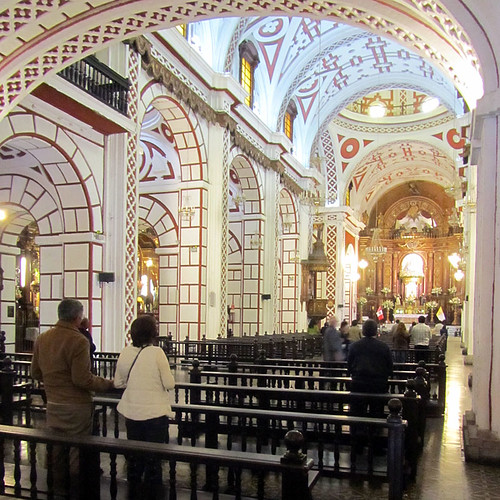 The Franciscan Church in Lima, Peru

As we toured the church, I smiled at a painting of the Last Supper. “They’re eating apples and potatoes and chili peppers,” I said.

As we toured the crypts beneath the church — or the first of three levels, anyhow — I was reminded of the Basilica di San Clemente, the church I loved in Rome. There, though, the tunnels under the building were actually city streets that vanished as sediment was deposited throughout time. And instead of being 350 years old, the catacombs in Rome are 2000 years old.

Note: Unfortunately, no photos were allowed in the Museo San Francisco. I know many people would have taken them anyway but — aside from the Cistine Chapel — I try to respect “no photo” rules. (I must be the only person to have visited Florence and not taken a photo of Michaelangelo’s David!) 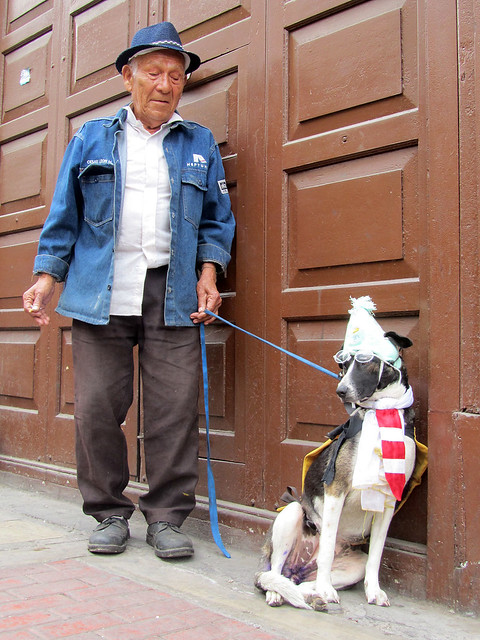 After I took a photo of this dog alone, the old man insisted I take one with him in it!

After the museum, we stopped briefly at Casa de la Literatura Peruana, the Peruvian writers museum. It was packed with schoolchildren, but there was little to interest me. (Although I did take a photo of the Mario Vargas Llosa sign for Aly, my tutor.)

Outside, we stopped in the Plaza de Armas to watch a part of the changing of the guard. The brass band was fun because instead of playing only marches, it played Latin-influenced jazzy stuff.

For lunch, we ate lomo saltado at a restaurant Manolo recommended. I wanted to try lúcuma juice, but the jungle fruit was not in season. “You might get sick from your meal,” Manolo warned me. I told him I knew the risks. I ate heartily, but still couldn’t finish all the food on my plate.

After eating, he led me down a long calle that has been closed off for several blocks as a pedestrian shopping mall. (This is very similar to places I’ve seen in Dublin, Paris, Florence, an Cape Town.) And then we took a taxi back to Miraflores. 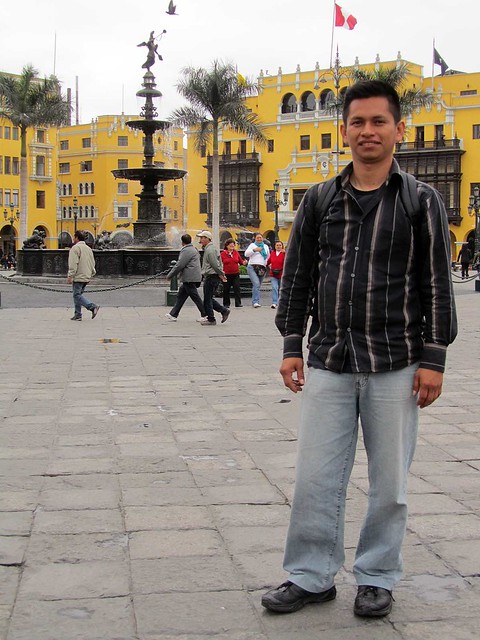 “How long have you been learning Spanish?” Manolo asked at one point.

Manolo smiled. “Cuatros mas y ya sabes todo,” he said. Ha. Not likely. It’s nice to be complimented, but I feel like I’m really struggling.

In the later afternoon, I walked around Miraflores — or a small part of it, anyhow. I explored the shops around Kennedy Park, and here I got confirmation that my Spanish is still very raw. While my conversations with Manolo had gone well, I couldn’t understand the folks in the stores — and they couldn’t undrestand me. But I muddled through.

In the evening, I spent some time lounging around Kennedy Park in Miraflores. But that’s a story that will have to wait until tomorrow.