What’s a typical May evening like at Rosings Park? Let’s take a peek…

It’s not raining when I get home from work. In fact, it hasn’t rained since mid-morning. I check the grass: it’s basically dry. I check the sky: it’s grey and ominous, but there’s no rain. I decide to risk it.

I set the mower wheels on high and start it up. I mow at light speed, nearly jogging. Even so, it’s a slow go — the grass is tall from all of the wet, warm weather. After just ten minutes, it begins to sprinkle. I continue mowing. A light rain comes and goes as I sprint through the tall grass. I mow the road lawn, the front lawn, the side lawn. I’m just about ready to start on the back lawn when there is a crash of thunder and the sky falls in. Rain comes down in a torrent. I park the mower under the maple by the back porch and go inside. So close! Another five or ten minutes and I would have mowed it all.

Our gutters, which were well-cleaned in January, have become clogged in the recent monsoons. I cleared the gunk from the lower gutter last night, but I wasn’t willing to brave the cold and the wet and the heights to clean the upper gutter. We stand at the kitchen window and watch the rainwater splutter-splutter from the top of the house onto Kris’ precious planter box.

In the spirit of “responsiveness”, I grab a stepladder and make for the roof. Simon helps. When I lean the ladder against the guestroom wall so that I can open the door, Simon climbs onto the bottom rung and wriggles his way to the top. There he surveys the room. He isn’t happy when Kris pulls him down. (You may recall that Simon loves ladders, as demonstrated by the following photo.)

Kris holds the ladder while I climb onto the upper roof. A single fat, waxy leaf is clogging the works. (Not much can reach the upper gutters. They’re very high.)

I grab my camera and snap a few shots, but can’t get anything framed that I really like. (“These pictures aren’t any good,” Kris tells me later as we are reviewing them. “You’ve cut off this plant here. And what about those roses? And we don’t need to see the lawn.” sigh) 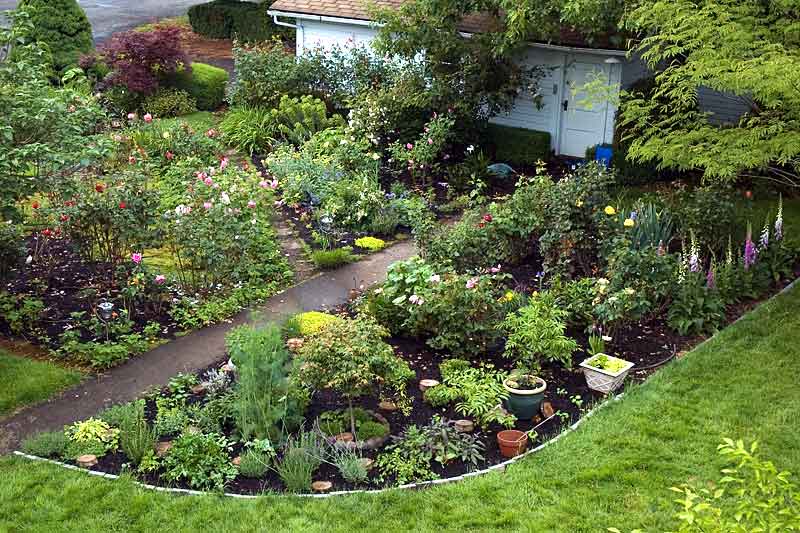 While Kris and I are otherwise occupied, Simon has come outside onto the lower roof and scampered along a little outcropping to the balcony outside Kris’ office. We decide to let him have some fun, and so go inside to eat our dinner. When we come back up to get him, he is gone. Kris goes outside into the yard to see what she can see. What she sees is Simon, now on the upper roof, lounging away.

She looks at the balcony outside her office. “I have no idea,” she says.

I look at the area around me. It is conceivable that Simon might have climbed up a low, angled bit of roof. But to have reached the upper roof, he would have had to twist himself at an odd angle while jumping, similar to the way he had climbed the ladder earlier. I shudder at the thought. Any mistake and he would have plummeted to the camellia hedge below.

I go to Kris’ office and out onto the balcony. Here the situation is almost worse. The only way Simon could have made it to the roof was to make a six foot leap to a small platform above another camellia hedge. A tough jump for such a big cat. (From there, though, it would have been easy for him to scamper up.)

These are the only two routes he could have used. It’s difficult to conceive that he would have tried either of them, but apparently he did, because now he is lounging on the upper roof. I climb up the rickety ladder and call him over. He trots to me, tail tall and proud: “Look what I did!” He trills and even purrs at me as I pet him. But then I turn into Bastard Dad, hauling him down to the top step of the ladder (which is wobbling beneath me).

He stomps off to sulk in the bedroom.

His little brother, Nemo, is proud of himself for sneaking into the basement during the excitement upstairs. At dinner, I went down to fetch a bottle of salsa. I must not have fully latched the door. All three cats have a special sense that tingles whenever they approach an unlatched door. I don’t know what Nemo finds so exciting in the basement, but he loves it. He can spend hours down there. (No doubt he’s tearing open the spare cat food bag — that’s one of his hobbies.)

At the moment, Toto, my misunderstood daughter is sitting on the arm of my easy chair, purring and staring at my face. She wants attention. Every so often she reaches out a paw and gently claws my ear, pulling it toward her. Why? Because she’s a cat.

Kris is upstairs watching the Lost episode from three weeks ago via BitTorrent. She’s sad that we’ve forgotten to download last week’s episode, because it further goofs up her sequencing. Basically, if tonight’s two-hour finale contains episodes D and E, and the one she just finished is A, she will be watching them in this order: B-A-D-E-C. I hope she can keep that straight in her head. (Update after the fact: she could not keep them straight in her head. Apparently episode C contains critical stuff, because she was completely lost. She gave up and will have me download it for her later.)

And me? I will soon be taking a hot bath while reading The Wealthy Barber, which I hope to review soon at my personal finance site.

And that is a typical evening during springtime at Rosings Park.