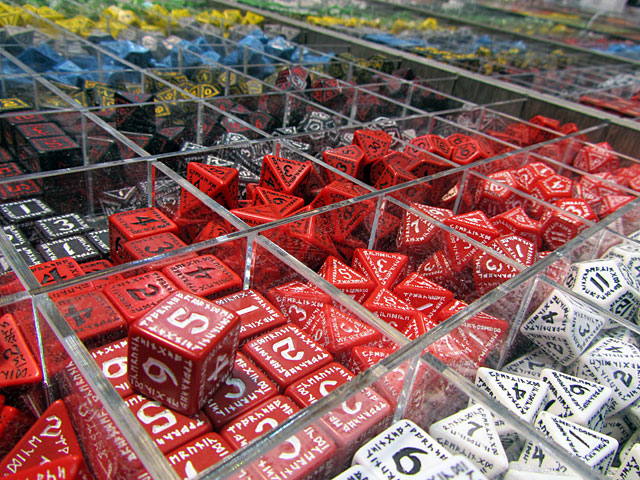 At GenCon, there were many vendors with many dice. This vendor’s dice were awesome.

As a life-long geek, I’ve always wanted to attend GenCon, one of the world’s most prominent gaming conventions. I remember reading about it as a boy and wishing I could go play Dungeons and Dragons with all of the older geeks. So, when Adam Baker (Man vs. Debt) invited me to visit Indianapolis to attend GenCon 2011 with him, I jumped at the chance.

For four days starting last Thursday, Adam and his wife (Courtney) allowed me to tag along with them as we joined tens of thousands of other nerds to play (and purchase) games.

We split a lot of our time among two rooms: the Mayfair room and the Rio Grande room. Mayfair produces games like Tigris & Euphrates, Empire Builder, and The Settlers of Catan. Rio Grande’s games include Dominion, Power Grid, and Carcassonne.

We played some of our old favorites (I actually won at Settlers, a game I normally loathe), but mostly we tried new games. Here, Adam is picking up the rules to Rio Grande’s Navegador, an exploration and economics game that won rave reviews from our group. (We all ended up purchasing it.)

Because GenCon is so huge — my guess is there were roughly 30,000 people present over the course of the weekend, so probably 15,000 or more at a time on site — it plays host to a variety of game tournaments and championships. The North American championship for The Settlers of Catan is played at GenCon, for instance. Here are folks playing Settlers at a custom-designed table: 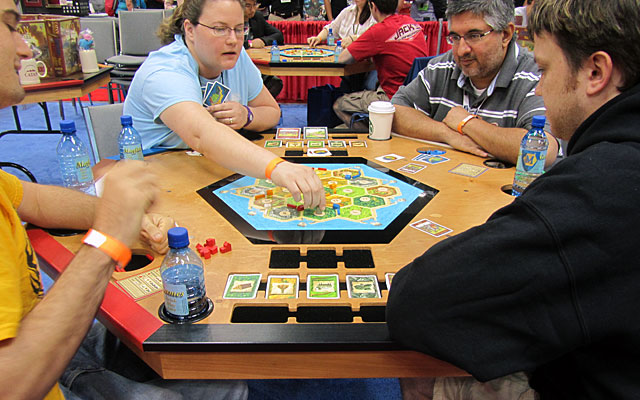 Hundreds (thousands?) of games of Settlers were played at GenCon

These custom-built Settlers tables sold at a reasonable price, actually. I think a fold-up version cost something like $150 and a full table maybe twice as much.

There were lots of expensive games and accessories that tempted me, including a $120 version of Automobile and a $150 version of Settlers. Though I bought a lot of stuff, I did my best to steer clear of the deluxe editions.

My favorite part of the entire show was the exhibit from Geek Chic. Geek Chic produces amazing high-quality furniture designed specifically for nerds. They make fancy filing cabinets for comic book collectors, display cases for folks who paint miniatures or collect action figures, and jaw-dropping tables for gamers. Their gaming tables (which range from the size of a coffee table to simply ginormous) are gorgeous. Best of all, they’re thoughtfully designed for gamers, with all sorts of great features and options, like dice towers, recessed play areas, and shelves for each player. This furniture is expensive, but probably worth it for someone who games a lot. 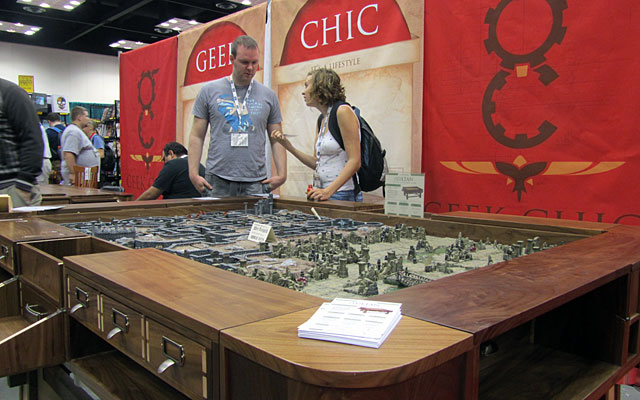 These gaming tables at GenCon were amazing.

I’m not willing to spend $16,000 on the massive Sultan, a ten-player table for miniatures and role-playing games. But I might consider budgeting $1300 for the Hoplite, a coffe-table sized game station. And there’s no question I covet the comic book filing cabinets!

Most of the stuff in the exhibit hall was much less expensive. In fact, most of the things for sale were games. 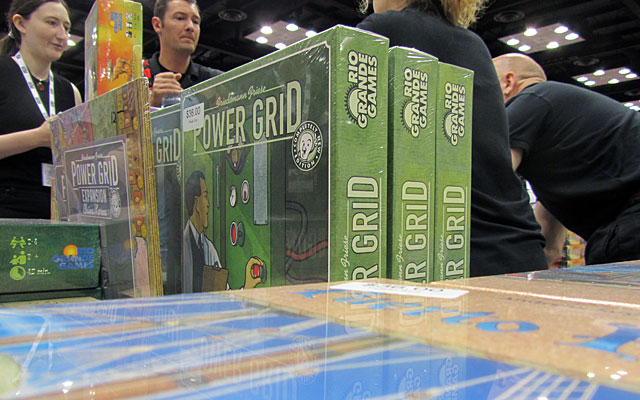 You could buy nearly any game you wanted at GenCon

On the final day of GenCon, Adam and I both took some time to browse for our favorite games. We’re both big fans of the games from Rio Grande: Dominion, Power Grid, San Juan, Puerto Rico, and — my favorite game of all time — Carcassonne. Both of us bought a copy of a new Rio Grande game called Navegador. I look forward to teaching it to my friends.

Other points of note: 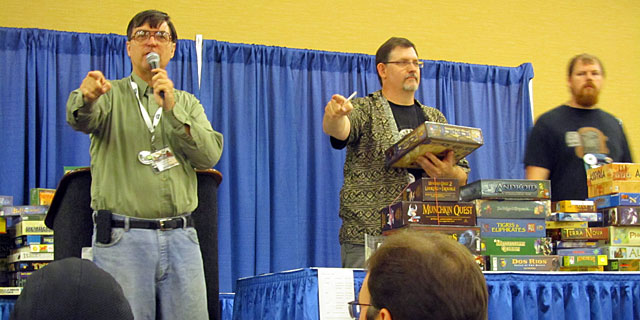 The GenCon board game auction. Adam bought the copy of Tigris & Euphrates you see here. 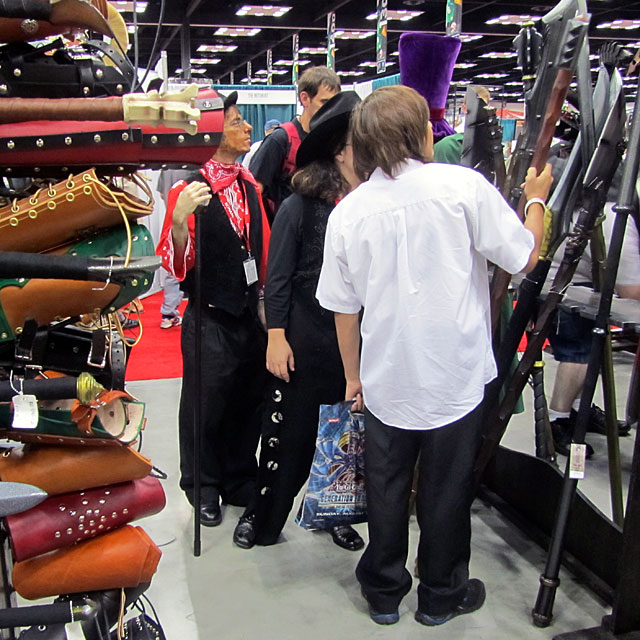 Lots of nerds came in costume. By the end of the con, even I was tempted by the costumes. 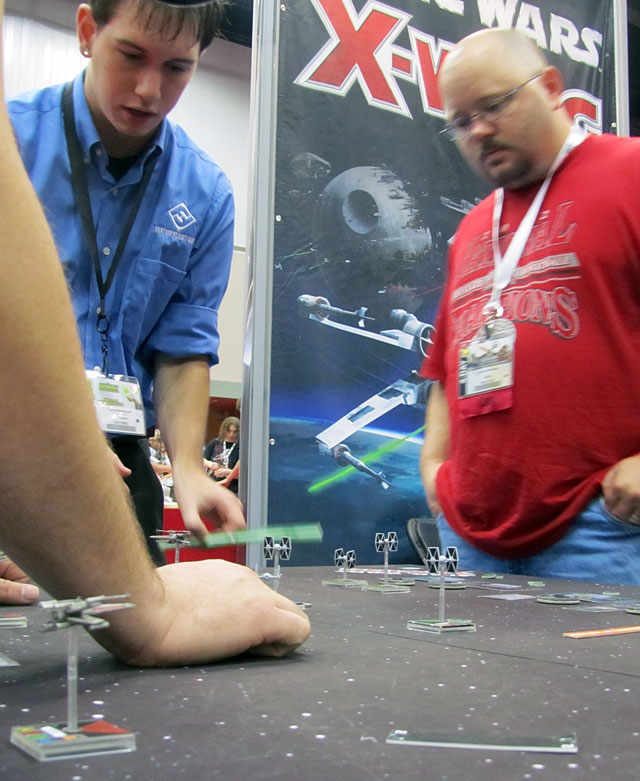 Companies previewed new games at GenCon, such as the X-Wing miniatures game.

I also stopped by to see my friend Nicole (on whose couch I slept two weeks ago) at her booth at the back of the exhibit hall. Nicole owns Green Ronin, a game publisher in Seattle. She was patient enough to answer some of my questions about her competitors’ game systems, and she even pointed me toward one that was best suited for gaming needs. (Okay, I’ll confess: I want to lead my friends on a role-playing game in which they play anthropomorphic mice. Think Watership Down but with mice instead of rabbits.)

I had a great time at GenCon, and I’d be happy to return in the future.

Footnote: I was supposed to fly to London immediately after the conference to begin a month-long stay in England (and possibly France and/or The Netherlands). But because of my mother’s health problems, I decided to cancel the trip. This makes me sad, but it means I can focus on preparing for my October trip to Latin America instead.