Warm weather in the Willamette Valley makes me crave cool drinks. I was raised in an alcohol-free home, and have only recently discovered the joys of adult beverages. 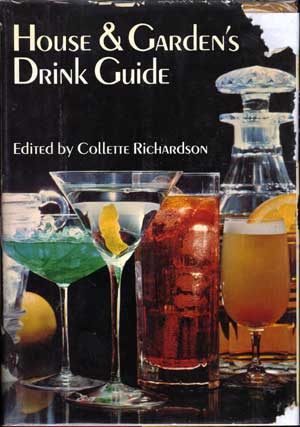 I bought a book on cocktails during my last trip to Powell’s, a book which has already yielded a couple of tasty treats.

I was initially turned off from cocktails because the first few I tried tasted more like alcohol than anything else. A couple of trips with Dave to the neighborhood bar have convinced me that cocktails can be quite delicious. I’m a sucker for anything citrus. Give me a lemon drop and a basket of fish and chips and I’m set for the evening.

House and Garden’s Drink Guide (published in 1973) is a fantastic book for a guy who knows almost nothing about liquor. (I do know that I like Scotch, but that’s about it.)

The first seventy-five pages (!) of the Drink Guide are devoted to explaining the history and science behind cocktails. Chapter titles include “What Every Drink Maker Should Know”, “Spirits and Wines — What They Are and How to Use Them”, and “What Drinks to Serve When”. The book is a pleasure to read because it’s so damned earnest: this was the era of serious cocktails and serious cocktail drinkers.

Mixing good drinks deftly and easily is a skill that not only affords a host a fine sense of accomplishment but gives guests a great deal of pleasure. It is a skill worth having, one that enhances hospitality and can make jovial a gathering of any size.

There are handy lists of drink measurements (such as jigger and pony), proper glasses, spirits for a well-stocked bar, garnishments and flavorings, and various types of mixers. There are short histories on brandy, champagne, rum, port, vodka, and whiskey. There’s a small wine section.

Here’s the two-page spread illustrating the various types of drink glasses (click on a page to open a larger image in a new window): 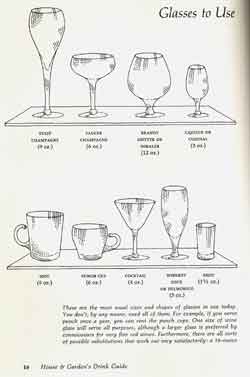 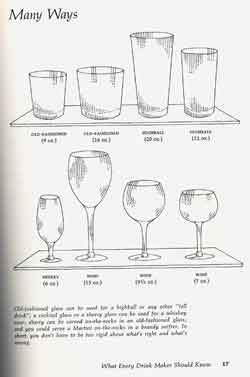 Browsing through the 850+ recipes in the Drink Guide, the Gin Fizz caught my eye. “Let’s try it!” Kris said eagerly. And so we did. It’s a little bomb of effervescent citrusy goodness. Here’s the recipe (with extended text):

Fizzes, which are popular drinks in the late morning and afternoon, are usually served in highball glasses. They are made from liquor, citrus juices and sugar, shaken with ice. The mixture is strained into glasses which are then filled with club soda or other carbonated drink, including champagne. Egg, both yolk and white, is used in some fizzes.

Perhaps the best-known of these drinks is the Gin Fizz. There are many versions of it, but following is the classic recipe.

Combine all ingredients except the soda in a cocktail shaker and shake vigorously. Strain into a [12 oz] highball glass and fill with soda. Serves one.

Brandy Fizz: Use brandy instead of gin.

I love that “serves one”. The book lists a four full pages of other Fizz recipes. Maybe I’ll try them all by the time I’m sixty.

Now that I’ve made several gin fizzes, I can ad-lib a little. By this I mean that I do not measure the citrus juice. Generally I do the following:

This yields roughly the correct volume of citrus juice, even if the ratio is a bit more heavily weighted toward the lime than the recipe specifies.

(Here’s a little secret: if you like citrus juice, this drink is damn good even without the club soda.) 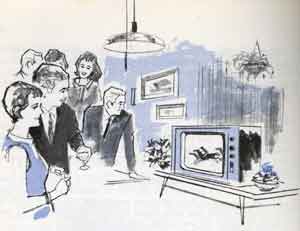 Mickey Finn’s, the pub at which we sometimes play trivia, makes a tasty little concoction they call a lemon drop. I’m not sure what’s in it, but a little digging on the web revealed a couple of recipes, the most likely of which seems to be this:

Mix all the ingredients in a shaker. Shake vigorously with cracked ice. Dip the rim of a chilled martini glass into some superfine sugar. Pour strained liquor glass. (Dave, the Drink Master, suggests triple sec instead of vermouth.) 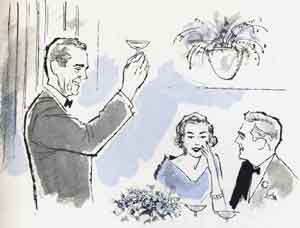 Kris’ favorite drink can only be found at Caprial’s Bistro. They call it a Metropolitan. We suspect that it’s like a Cosmopolitan, but made with grapefruit juice instead of cranberry juice.

I’ve e-mailed Caprial’s. They’re going to look up the recipe and e-mail me on Monday or Tuesday. (How cool is that?) I’ll post the recipe next week. 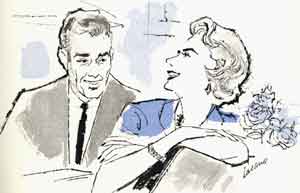 Aimee, who inspired this entry, forwarded the following recipe. “Try this on a hot day,” she says.

Blend the first four ingredients in a blender until mixture has a
smooth, slushy texture. Divide among six champagne flutes or slender
glasses. (This is a must! It makes it more fun to drink the daiquiri in

fits and starts.) Garnish with a sprig of mint.

Tune in next time when we may (or may not) explore the gentle art of smoking. 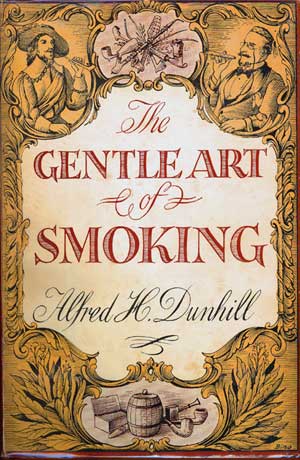 This entry is dedicated to little Aimee Rose. Illustrations are from How to Give Successful Dinner Parties (1970) by Adele Whitley Fletcher.

I do not think I have a favorite drink. I like things for a while and then move to something else. Not that I drink very often. I order Tom Collins when I am in a bar that I do not know because I think that is good to know how to make the drink that you are ordering so if then screw it up you can tell them how you want it. 🙂
Recently, I found martini mixes (Cosmopolitan, Sour Apple, Chocotini, and my favorite right now, Tangerini) that were a hit at the Girl’s Weekend that I just hosted.

Also over that weekend we found that you can make a White Russian with soy milk and it taste just fine.

I remember one warm summer Portlandish evening when you and Kris dropped by our little yellow house in Brooklyn and whisked us off to dessert at Caprial’s. While we all hemmed and hawed over the drink menu selections, Kris – without a glance at any other concoction – ordered her Metropolitan and generously offered tart and refreshing tastes all around.

This Spring, during an April heat wave, Joel and I were casting about for a new signature cocktail. Although one can hardly call a G&T (or for those with a more sensitive palate, Tangaray & Tonic) a signature drink, the almost effortless splash of gin, splash of tonic, and sliced lime is a tried-and-true, easy mix. However, sometimes one craves a bit more of a challenge in his or her after-work salve, so we tried to re-create Kris’s Metropolitan, and stumbled upon The Fog.

Taking it’s name from the after-affects of one serving and the opaque quality of the combination as seen through a martini glass, The Fog introduces stalwart vodka to flirty Cointreau in a fresh-squeezed, pulp-included grapefruit juice world. A lime garnish, perched on the side of the glass, tags along.

Unless you’re hoping to cache Caprial’s Metropolitan in the Top Secret Roth-Gates Family Recipe, do share all around … I’d like to set up a taste-test: Metropolitan versus The Fog, tonight only in a knock-down, drag-out. Livers at the ready!

If you like lemon drop martinis, you should try them with limoncello rather than citrus vodka.

Your life will never be the same. 🙂

Mint juleps aren’t bad, either, once you get past the idea that they’re not mint slushies.

Jd did you read moms post under your May 30th post on the family page? You need to read that!

Wow, you guys make it? I’m impressed! I just run down to the liquor store, grab a bottle, and throw it in the freezer when I get home. We are fortunate enough to have the Luxardo brand available here in southwest Missouri.

Hmm.. 10:05 on Sunday morning. Gotta be happy hour somewhere, right? Now that I’m thinking about it, I must have a few sips – it’s THAT good.

/me trudges towards the freezer, shot glass in hand…