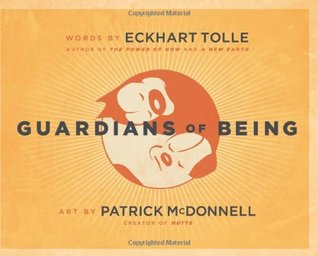 Since arriving home from our cross-country RV trip at the end of June, Kim and I have both been overwhelmed by modern life. We’re overwhelmed by the busy-ness of it all: the pace, the scheduling, all of the requests for time and attention.

“Why is this so tough for us?” I asked the other day. “We didn’t have problems before we left.”

This morning, I was reading Guardians of Being, a short book that mixes the philosophy of Eckhart Tolle with the animal art of Patrick McDonnell (from Mutts). Tolle, of course, is best known for his massive bestseller, The Power of Now, which encourages readers to get out of their heads and be more “present in the moment”. I was struck by this quote from Guardians:

Most of us live in a world of mental abstraction, conceptualization, and image making — a world of thought. We are immersed in a continuous stream of mental noise…We get lost in doing, thinking, remembering, anticipating — lost in a maze of complexity and a world of problems.

While we were on the road, Kim and I lived in the Now. We were always present in the moment. We might have vague plans for where we wanted to be in a few days or a few weeks, but mostly we made things up as we went along.

“Where do you want to go next?” Kim might ask, and then we’d pick a spot.

“Where should we camp tonight?” I might ask as we drove to the new town, and Kim would find a campground. “What should we do for dinner? Should we visit that park? This site is awesome — let’s stay a few more nights.” Nearly everything we did was spontaneous. We had no plans or commitments and it was wonderful.

But back home, even without jobs to go to (yet) and few plans, the pace of modern life is staggering. We’re always doing something with somebody. We schedule appointments and anticipate commitments. We have to-do lists. We go to the gym three mornings a week, take the puppy to puppy classes, agree to help colleagues, and so on. There’s so much going on that there’s never a chance to simply be present in the Here and Now.

And the stuff! There’s so much stuff! We had few possessions in the motorhome; we didn’t miss what we did not have. Here at home, even though we own less than many folks, we have tons of stuff. Tons of stuff! So many books! So many clothes! So many dishes! So much in every closet and cupboard.

Kim and I are overwhelmed because we’ve made a sudden transition from doing and having very little to doing and having a lot. All of the stuff and commitments comes with mental baggage. It takes brainwidth. 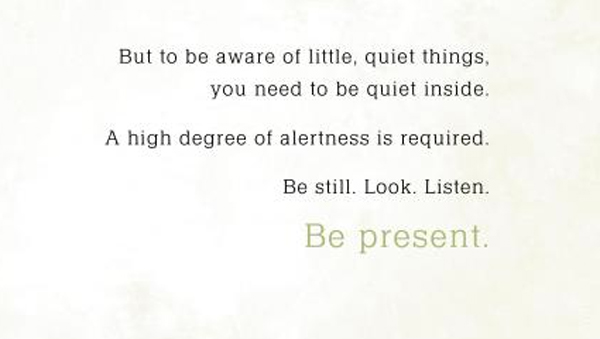 Last week, I met with my friend Michael. He’s a career and marriage counselor. I told him how overwhelmed we are. “We feel like we need to move to a small house in the country,” I said.

Michael nodded. “I can see how that might help,” he said. “But you know what? I’ve found that many of my clients who crave change can find happiness closer to home. They think the grass is greener on the other side of the fence, that they’ll fix things by making big moves.”

“What do you suggest instead?” I asked.

“Something less drastic,” Michael said. “I try to get folks to find ways to shape their current situation to meet their needs. If they want a new job because they think it’ll allow them to be more fulfilled, I ask if there’s a way they can restructure their current position so that it gives them that fulfillment. In your case, I’d suggest you don’t need to buy two acres in the country to get what you want. You can probably find ways to stay where you are — because you have a great home in a great location! — while simultaneously reducing the stress and the stuff.”

I’ve been thinking about Michael’s advice for the past week. He’s right. We do live in a great spot. We both love it. It’s not the spot that’s the problem. It’s being surrounded by so much stuff in the house, and by the sudden need to schedule our time. We can’t remove all of the stuff and we can’t live completely free of schedules, but we can certainly be more judicious with both. We can guard our time assiduously, which would allow us to be more spontaneous (like we were on the road). We can purge some of our possessions, then be cautious about what we allow to come into the condo.

Here’s another quote I liked from Guardians of Being:

Michael is right: We don’t need to move the country to reduce complexity. We can do it here. And now.