I had hoped to have the new foldedspace up-and-running by now, but you know me: I’ve found other things to keep me occupied. Instead, things are only about a quarter of the way moved over. The last 72 hours have basically been spent “re-modeling” the house. I put re-modeling in quotes because we’re not actually doing construction; we’re simply moving furniture all over the place.

To summarize what has come before:

If you’ve been following along at Get Rich Slowly, you know that I’ve been on an anti-clutter kick lately. I feel as if we have too much Stuff. It’s driving me crazy. Everywhere I look, there’s Stuff. I proposed a change to Kris, and she accepted it. This weekend we began the first steps toward this change.

Here’s what we did:

I spent this morning putting the final touches on my office. It’s still not finished completely, but it’s mostly clean, and that’s what counts. I’m actually rather pleased with how things have turned out. Here’s a picture (or three) for you. As you might expect, there are a lot of stories behind these photos. Let me elaborate… 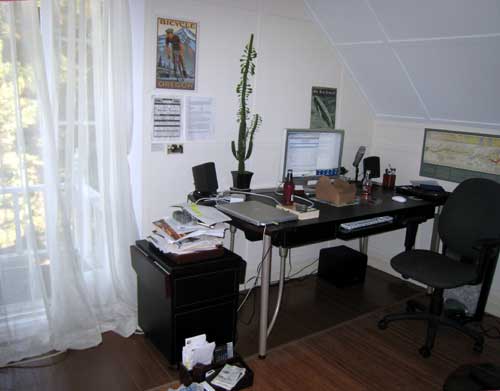 This is what you see when you enter the room. This is the messiest remaining area. To the far left are the French doors to the balcony. Just to the right of them is my new filing cabinet. This cabinet is currently empty, but there sure is a pile of Stuff on top of it! On the wall above the filing cabinet are a photo of my grandfather and his Model T, a Getting Things Done flowchart, a letter dated 12 May 2007 from my pal Paul Carlile telling me I can do anything I want to do, and a poster from Dave promoting the Bicycle Oregon touring event. (There’s also a dirigible print from Dave above my monitor.)

That’s my new desk dominating the room. I like it. It has a keyboard tray, which means I don’t have to elevate my arms 4″ to type anymore. Rock on. The cactus is a “gift” from Kris, who didn’t want it downstairs, and who decided it was a “manly plant” and thus suitable for my “manly office”. The monitor was the first thing I purchased with Get Rich Slowly money. Yes, I was stupid and didn’t start paying off debt before buying toys. But that was last year. This year, I’m paying off debt, and am nearly finished! (The laptop was also purchased with GRS money, but I don’t consider it a toy. It’s my most important tool.) 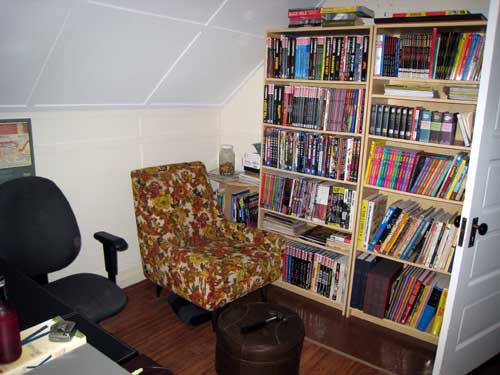 If you step into the room and turn to your right, this is what you see behind my work area. On the desk, you can see Brothers K ,this month’s book group book, which neither of us have started yet. You may recognize the chair as originating at Mac and Pam’s new house — I took a photo of Hank in this chair a couple of years ago. In theory, this chair (and its mate, which lives at Custom Box) is destined for Craig’s possession. In reality, he can’t have it. I love the thing.

Behind the chair is a short little shelf that only lives in that space until I can figure out something better to do with it. On top of the shelf is a jar of fruit and nuts. The two bookcases, of course, hold my current comics collection. It is much reduced, as I mentioned, but still quite bulky. The left shelves hold comic book compilations, and the right shelves hold comic strip compilations. The right shelves are far more important to me. 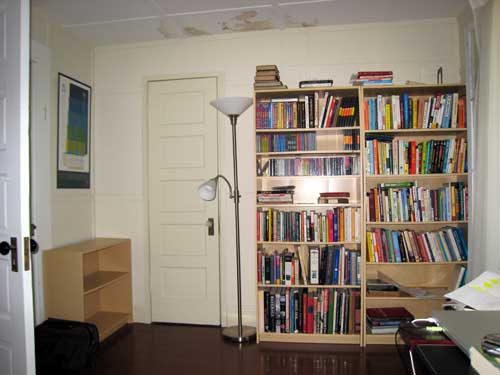 If you were to sit at my desk and look back toward the room’s entrance, this is what you’d see: more bookshelves. Surprised? I didn’t think so. Of course, you also see water stains. These are remnants of that shitty insulation contractor (Gale Contractor Services) who left a gaping hole in our roof. We believe the leak has been sealed finally, but we haven’t repaired the water damage yet since we know that next year we’re going to have the electrical system replaced, and that’s going to require attic access. There’s no attic access except through the water-damaged area, though. Complicated, isn’t it?

As you can see, there’s a short, empty bookcase. That’ll be remedied by the end of the week. The two taller bookcases contain:

Yes, there’s still some work to be done before this office is finished, but I feel like I have most of the hard stuff licked. Now it’s just piddly stuff.

And that, my friends, is why the foldedspace remodel is not yet finished, and probably won’t be for a week or two…