How much stuff does one man need?

It seems like every time I travel, I come home committed to win my war on Stuff. This time was no different. I lived out of a single carry-on bag while vacationing in Belize last week, and even that felt luxurious. Now I’ve returned to a house packed with doodads and gewgaws, knick-knacks and baubles.

The more I purge Stuff from my life, the more I travel, and the more I see (and read) about how little others need to get by, the stronger my conviction to reduce what I own, as well. I’m in awe of my friend Leo from Zen Habits, for instance. At his secondary blog, mnmlist, Leo has been chronicling his attempt to reduce the number of thing he owns. At first, this was his 100 Things Challenge (he wanted to own just 100 personal items). Recently, he’s upped the ante. It’s now a 50 Things Challenge. Wow.

I’m not ready to go to this extreme — not even close. But I am beginning to wonder: How many t-shirts does one man need? How many jackets? How many books? And how in the heck did I end up with more than ten pairs of shoes? Ridiculous! How much Stuff does one man really need?

Over the past three years, I’ve made great strides in ridding my life of Stuff. I’ve sold or given away thousands of books (yes, thousands). I’ve purged a garage full of computer parts. I’ve managed to turn off the rationalization switch in my brain and learned to simply donate my Stuff to charity instead of saving it for “someday”. And about a year ago, I started my slow-motion clothes purge.

Based on a Get Rich Slowly reader suggestion, I moved all of my sweaters and button-down shirts to an unused closet. For the past several months, I’ve gradually pulled one shirt and then another into my regular closet as I actually wear them. Unworn shirts and sweaters stay in their temporary holding space. At the end of this process (which should be in June), all of the shirts I’ve worn in the past year will be in one closet, and the Stuff I don’t wear will be purged.

Do you know how many different shirts I’ve worn over the past nine months? I just went upstairs to count. My “good” closet contains 17 button-down shirts and three sweaters. My closet of unused clothes contains 30 shirts (two of which haven’t even been taken out of their packaging) and 11 sweaters.

Sometimes I think I’m the village idiot. I don’t even wear two-thirds of my wardrobe? It’s like I’m just throwing my money away. But rather than beat myself up over this, I can use the info going forward.

For example, Kris and I made a trip to REI before leaving for Belize. I fell in love with one shirt, but I almost didn’t buy it after looking at the price tag. $40? For a shirt? Get real! I rarely spend more than $20. But then I realized: If I really love the shirt and it’ll live in my “good” closet, then spending $40 is much better than buying two cheap shirts I never wear. I bought the REI shirt in two colors (rust and aqua), and I’m glad I did. (But maybe I should get rid of two other shirts from my “good” closet to make up for this.)

I’ve begun to realize it’ll take a few more years to finally get rid of the worst of my Stuff. It took me two decades to acquire these things; it’ll take a bit of time to unload it. But how will I know when I’m finished? How much Stuff does one man need?

The Magic of Thinking Small 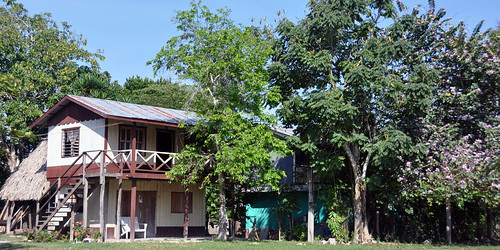 Note: From talking with some of the folks who live there, I think people in Belize want bigger homes, but can’t afford them. It’s not like they’re choosing small homes because they think it’s virtuous.

Seeing these small homes made we think: What would I choose to own if my space were limited? Could I really rationalize my comic book collection? Forty-seven button-down shirts and fourteen sweaters? Two bicycles? My burgeoning pile of shoes? Which Stuff is worth owning, and which is not? And if it’s not worth owning in a small home, why is it worth owning in a large home?

I don’t know the answer to these questions; I’ll continue to puzzle them out.

This weekend, one of our neighbors held a yard sale. Kris and I went across the street to chat. “Wow,” Kris said. “It looks like you’re selling everything.” She scooped up the neighbor’s canning jars.

“In a way, I am,” our neighbor said. “I’m moving into a smaller place, and I have a couple of weeks before I have to be out of this one. I’ve already moved everything I want to keep, and I’m selling everything else.”

But who says I can’t? Why can’t I pretend that I’m moving into a smaller place? If I did, what would I keep? What is it I really value? How much Stuff does one man really need?