Allow me to rave some more about my new computer. Again.

I’ve never purchased a top-of-the-line machine before, so this is new experience. I feel like I’m on the cutting edge. Admittedly, a lot of this stuff isn’t new — people have been doing these things for months or years — but it’s all new to me, and I’m wallowing in the wonder of it all. 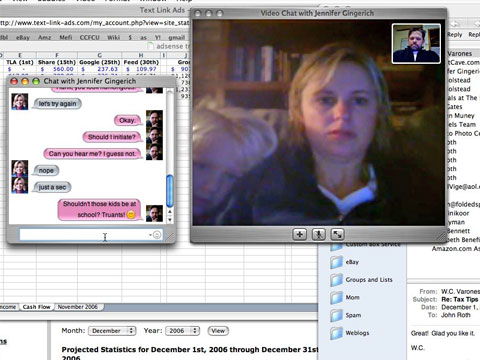 Here are some of the things I love:

I’m like a raving fanboy. I don’t care. I’ve only had this machine three days, and already I know it’s the best computer I’ve ever owned. While the 17″ size is still rather large and cumbersome, I’m getting used to it. This computer will never be as convenient as the 12″ models I’ve had for the past five years, but the additional screen real estate is a fair compromise.

“You’ve come a long way since you switched back to Mac,” Jeremy said last night over video chat.

“Yeah,” I said. “When I first switched back, I found a lot of things frustrating. I wasn’t wholly sold on the Mac experience. I’m sold now.” And I am. This is the way computing should be: fun, exciting, and productive.

For the geeky, here are some comparative stats.

On 30 September 2002, I switched back to Mac by purchasing a 12″ iBook. It was a 700mhz G3 with 128mb RAM and a 20gb hard drive. The iBook had a DVD/CD-burner combo. It connected to the internet via internal modem or an ethernet cable. (I eventually bought an add-on wireless card and expanded the memory to 640mb.) I purchased very little software for the iBook; most of what I needed came with it.

On 27 November 2006, I purchased this 17″ widescreen MacBook Pro. It’s a 2.33ghz Intel core 2 duo with 3gb RAM and a 160gb hard drive. The machine comes with a fast wireless connection, built-in video camera, and who knows what else. I’ll purchase very little software for the MacBook Pro; most what I need comes with it.