I’m not the only semi-celebrity J.D. Roth. For more than fifteen years, I’ve been receiving email and tweets and Facebook messages intended for the other JD Roth, the former executive producer of The Biggest Loser — and tons of other television shows.

Apparently the other JD Roth has a lot of fans. Actually, I’m one of them. I’ve been watching his shows since 2009, when season seven of The Biggest Loser inspired me to start my own weight-loss journey. When he published his book The Big Fat Truth in the spring of 2016, I read it the day it was released. I thought it was great, and wished that I could interview the author, but Kim and I were in the middle of our 15-month RV trip across the U.S. and I couldn’t make the logistics work.

In 2017, when I learned that Roth had created a TV version of The Big Fat Truth, I knew the time had come at last: J.D. Roth was going to interview JD Roth. Last August, we made it happen.

Note: It can be tough to tell the two of us apart. We’re both 5’8″. We both have the same facial hair. We both have beautiful wives/girlfriends. And we both share similar underlying philosophies regarding success and personal development.

That said, there are some subtle differences between the two of us.

For the purposes of this article, here’s how to tell us apart: When I write about myself, I won’t do it in the third person. I’ll say “I” and “me”. When I write about the fitness JD Roth, I’ll use proper journalistic form and refer to him by his last name.

“I’ve been watching your new show [The Big Fat Truth], and I really like it,” I told JD Roth at the start of our phone conversation. “I like that it’s less of a game show and more about helping participants address not only their health, but the other things they’re struggling with in their lives.”

“Plus, The Big Fat Truth feels less produced than The Biggest Loser. There aren’t any weekly weigh-ins and there’s not dramatic music. It’s you sitting down and helping real people living their real lives facing real challenges — but still achieving real results.”

“In one episode, for instance, you have a couple analyze how they allow words to hurt them — how they use what others say as an excuse to make bad food choices. Or there’s the mom episode where you go over to Nancy’s house and it’s a mess. Her basement is a disaster, so you ask her to clean it up. I think you say something like, ‘Fix your mind and the body will follow.’ I love that.”

“All of these things in your life — your basement, your bank account, your belly — are a microcosm of what’s going on in your mind. Being ready to assess your inner life is probably the hardest part of losing weight. But it’s also the most important.”

“Here’s an exercise I’ve used in the past,” Roth said. “I tell participants to go home and clean out their bedrooms. If you want to lose weight, empty out your bedroom. Let yourself wake up to peace, organization, and calm. Give yourself this one oasis to escape from the chaos of life. This small step is a great place to start.”

From Desire to Transformation

“How do you help people move from desire to transformation?” I asked. “Many people want to lose weight, just like many people want to get out of debt. How do you move them from wanting to doing?” Before Roth could answer, I explained my own approach.

“I’m a big fan of the personal mission statement,” I said. “My goal is to get my readers to drill down to the things in life that are most important to them. I believe that if they’ll make decisions based around their core values, they’ll naturally be more motivated to achieve the success that they’re craving.”

He related an anecdote from his excellent TEDx talk about helping people learn to believe in themselves.

“I use this exercise with all of the people that I coach,” Roth told me. “I ask them to send me a list of small victories every day. As you might expect, most of these small victories are mundane. But sometimes they’re game changers.

“One guy, for instance, wrote that his small victory was this: ‘Today I tried, even though my trainer wasn’t looking.’ That might not seem like a big deal to the average person, but it was a big deal to me. It made me wonder where else this person wasn’t trying when nobody was looking. As a father? As a husband? As a co-worker? And here’s how this relates to motivation, to transformation.

“This guy realized the most important thing of all: ‘I’m doing this for me. I deserve it.’ He’s not losing weight for somebody else. His effort isn’t to please others. His effort is for himself. It doesn’t matter what other people see; what matters is what you see. When you try, you’re trying for you, not for anyone else. When you realize that, when you flip that switch, it’s so much easier to make the leap from desire to transformation because the motivation is there. It becomes intrinsic instead of extrinsic.”

“And did this guy lose weight?” I asked.

I Can and I Can’t

Roth believes there are two types of people: I Can people and I Can’t people. “If you don’t think you can do something, you won’t be able to. I Can’t is a self-fulfilling prophecy,” Roth says. “The bigger message is that you really are capable of doing things that seem impossible to you.”

“I agree,” I said. “I’ve seen this not only in other people, but time and again in my own life. When I’ve lost weight in the past, it’s always seemed daunting at the start. But I’ve made it happen. When I decided to get out of debt, that seemed impossible too. But by taking small steps and staying on course, I not only defeated my debt but also achieved financial independence.”

“Yeah,” Roth said, “I’ve seen similar mental shifts in the folks who have been on our shows. They start The Biggest Loser and it’s a struggle to stay on the treadmill for ten minutes, but by the end of the season, they’re able to run a full marathon. They never thought they’d be able to do it, but they can.” 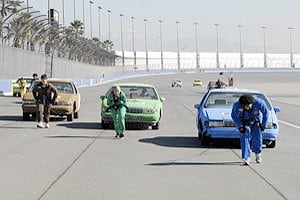 “I love The Biggest Loser marathon,” I said. “Season seven of the show was a huge inspiration for me. It changed my life. I remember watching Tara Costa each week, watching how she went out there and just conquered whatever challenge came her way. So much mental toughness! For me, the most amazing moment was watching her pull the race car around the track. I saw that and decided that I wanted to be that tough too.”

“Yeah, Tara is amazing,” said Roth. “I ran much of that marathon with her, just off camera.”

“Watching her run the marathon in season seven inspired me to complete a marathon myself. It must have been May 2009 when that episode aired. I signed up for the Portland Marathon, and that October I did all 26.2 miles!”

“The mental health aspect is huge,” I said. “I have a tendency toward depression and anxiety. If I don’t exercise, things can get dark and gloomy. But if I make sure to remain active, I’m much happier with myself and others.”

“Exactly,” Roth said. “Nobody is hungry enough to eat themselves to three, four, five hundred pounds. Those hunger pains [sic] are actually other pains. They’re symptoms of something else. People develop these habit loops in which food takes the place of solving the actual problem. The number one thing I try to do is help people break their habit loops.”

For more on the concept of “habit loops”, check out this GRS guest post on how to change your spending habits from Charles Duhigg, author of The Power of Habit.

In the past, I’ve encouraged GRS readers to “just solve the problem“. I advocate a six-step process to tackle the things you’ve been neglecting. Roth has similar advice, but he takes a simpler approach (which is better, I think). His three steps to solve any problem are:

“Do you think some people become addicted to food?” I asked.

“Well, food science is a real thing,” Roth said. “Foods are engineered to produce the perfect amount of dopamine to the back of your throat. Eating junk food makes you feel good in the short term. It makes you want more.

“It’s also interesting to note that the recidivism rate on drugs, alcohol, and food are identical,” Roth said. “A person who loses 100 pounds is just as likely to regain that weight as a recovering alcoholic is to relapse. It’s fascinating.”

We wrapped up the call by talking about the similarities between physical fitness and personal finance. Yes, I know this is a topic that’s been beaten into the ground by money bloggers during the past decade, but it remains an endless source of fascination for me — probably because I’ve struggled with both money and diet in the past.

“Several years ago, I asked Suze Orman to be on our show,” Roth told me. “She came on The Biggest Loser to talk with our participants because I believe there is a relationship between fitness and finance. Like I said, it’s all connected.

These days, Roth is financially independent. He sold his production company a couple of years ago, and now he’s semi-retired, much like me. “I’m only doing work that I’m passionate about,” he said. “I’m only working on things that are important. I’m in the fortunate position to be able to do a show for a start-up network on a subject that I’m passionate about — encouraging people to pursue a whole-food, plant-based diet.”

He paused for a moment. “I guess it goes back to my mission statement. I want to leave people better off than I found them.”

Technical note: For some reason, I couldn’t get Skype to work for my phone call with the other JD Roth, which means I didn’t record the call. I had to take notes by hand instead of go back later to grab actual quotes. As a result, the conversation in this article is a reconstruction rather than a transcript.