Man vs. Skunk: A Photo-Essay

Regular foldedspace readers are aware that we’ve been harboring a skunk under the office for the past two months. The odor was fairly strong at the end of October, but faded for several weeks until erupting in a perfect storm of stench earlier this month.

Today, I’d had enough. I made it my crusade to eliminate this odor from our lives. Here’s the story of J.D. vs. the skunk.

This is the old trailer house in which our offices are housed.

My office is on the left-most end of the trailer. It is from here that the odor emanated. It was strong. It was nauseating. It was unbearable. We evacuated my office, moving all necessary paperwork and computers to other offices. When the smell would not go away, we called in a company called the Critter Gitters. They set a trap in order to lure the skunk from under the house. 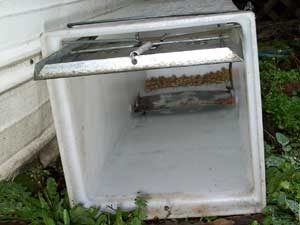 We left the trap outside for about a week, but to no avail. No skunk. Last night, it dawned on me: a whole host of factors seemed to indicate that the skunk might not be alive to take the bait; it was likely that the skunk was dead. This seemed so probable, in fact, that I prepared to crawl under the trailer to retrieve the corpse without taking any pre-cautions in case I might encounter a live animal (or worse, more than one). 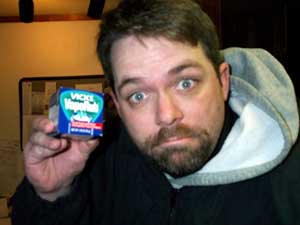 I bought a box of Vicks VapoRub. (I was just going to buy Vaseline, but Kris noted that Vaseline doesn’t really have much of an odor.) Would this stuff work? 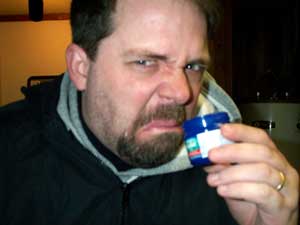 It certainly had a strong odor of its own! I applied liberal gobs of it to my moustache and to my nose (including inside my nostrils). 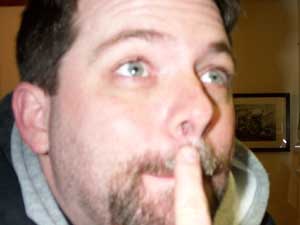 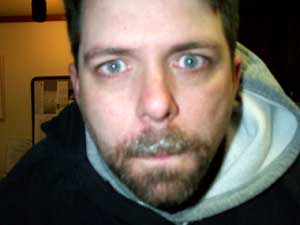 It smells no worse than skunk, though. Fully armed with two flashlights, the digital camera, a garbage bag, a dustpan, some eye protection, and a pair of gloves, I set off to find my skunk. 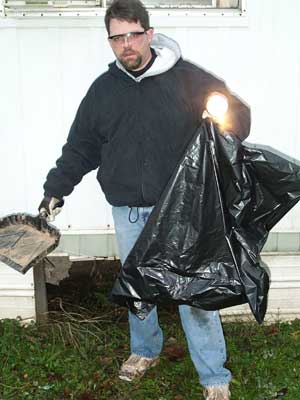 There’s no easy way to maneuver under the trailer house. The crawlspace is small, especially toward my office. I simply sucked it up and dove in… 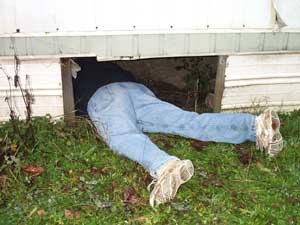 The ground under the trailer is basically solid earth. Or, at this time of the year, a cold, hard mud made damp from weeks of rain. Much of the trailer’s underlayment has been torn away, and insulation hangs in wads. I’m almost certain this damage was caused by the three ornery boys who grew up here. 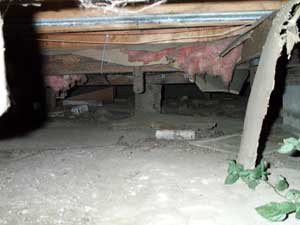 It took some time to determine the best path. Eventually, I opted to skirt the edge of the house, crawling around the wheelbase. 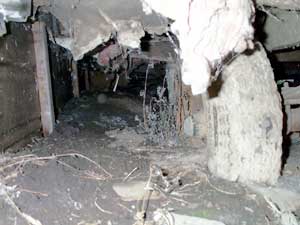 My second obstacle was the sewer pipe. I thought about crawling under it, but elected to go around again. 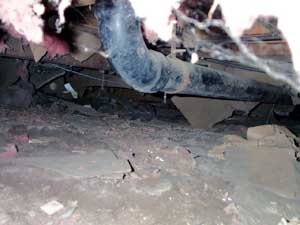 Soon after, though, I found myself stuck, wedged between a metal joist and the sloping ground. I had to crawl backward to get out from under the house. I removed my jacket and my sweatshirt, leaving only a turtleneck. Minimal protection, but my body was much thinner now. This time, I made it through the tight place. Almost immediately, I found the dead villain. 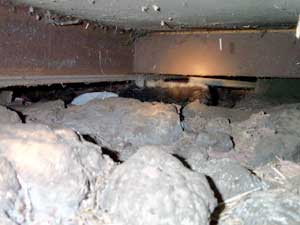 It took several more minutes of maneuvering to reach the body. It was a tight fit, as I’ve said. And the whole time, the skunk’s scowling face stared at me. His little black beady eyes were knowing and evil. They gave me the heebie-jeebies. Oh, and let’s not forget the stench. Even though I was making every effort not to breathe through my nose, it took enormous discipline to keep from wretching. It would not have been fun to crawl through my own vomit. By breathing through my mouth, I avoided most of the stench, though my throat did begin to burn. 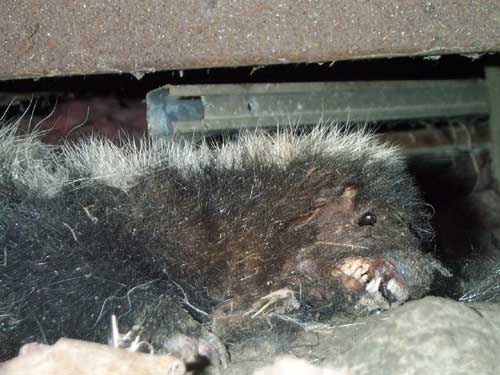 I wrestled the skunk into the garbage bag, and then dragged it outside. 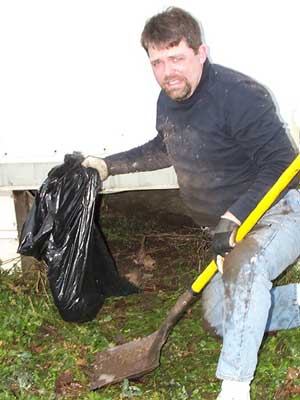 I felt triumphant! I also felt sick. Though the Vicks VapoRub did a fine job of suppressing the smell, I could taste the musky foulness.

What then to do with the skunk? “Throw it in the trash!” suggested Jeff. This seemed like an awful thing to do, simply shifting the odor to somebody else. “Burn it!” he said, but I was worried about the stench of burning flesh. Eventually, we hit upon an imperfect solution: we buried the thing on the furthest corner of the property, near the road. 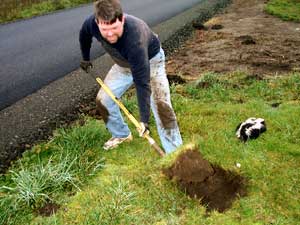 Now we’re waiting for the trailer to de-odorize. Most of the rooms already smell fine. My office, however, stinks, probably because the skunk died just below it. Perhaps, too, it stinks because Nick dowsed all of the draperies in vinegar. sigh

J.D. wins best post of the year. Hands down.

Ok, that is probably the scariest and stinkest thing I can imagine. That dead skunk picture is disgusting. I can’t believe you did that. Being under the house would have scared the heebie jeebies out of me just on it’s own, let alone having to find THAT thing and bag it!

Thank goodness I am NOT a man and will never have to crawl around under a house looking for dead varmints.

next task? Find the skunk’s mode of entry and bar any future spelunking by J.D. Unless he secretly liked it.

How will he smell when he gets home, I wonder? Great job, Custom Box Hero!

Find the skunk’s mode of entry, Mac? You mean any one of the dozen places where the skirting is missing? 🙂

I keep meaning to post this anecdote. It’s funny (and skunk related), though it’s also a bit like the whisky anecdote:

One day last week I had to spend a couple of hours in the office before visiting customers. Though I couldn’t smell skunk on my clothes when I left, I knew the odor was there. “I can’t make sales calls smelling like a skunk,” I thought. “What can I do?”

It occurred to me that I should stop by home and pick up my pipe. I did so. I puffed it in the car for about ten minutes, bathing in the rich aroma of cherry tobacco.

When I got to my first appointment, I realized that I probably smelled like Tony used to: like the butt end of a cigarette. I took a ten minute walk, hoping the odor would fade.

As I carried the Christmas basket (filled with tons of goodies) into my customer’s office, I noticed a “Proud to be a Non-Smoking Workplace” on the door. Great.

I greeted the client with a hearty “Ho ho ho”. The basket was well-received. But after a minute or so, the client frowned — only slighlty — and backed a step away from me.

After this, I drove around for twenty minutes with all my windows rolled down, hoping the cold, brisk wind would all the odors from my body.

I’ve had a disproportionate number of Idiot Stories this winter, haven’t I?

Don’t worry, Kris, my shower was used to remove whatever residual odor there may have been from J.D. (although he didn’t smell like skunk when he came down here, amazingly enough). There is a bit of the mud from under the trailer house in my back entryway and bathroom, and Silver was spooked by J.D.’s muddy shoes left in the back entryway until I took them outside. I don’t know if that was because of J.D.’s scent or the skunk’s. 🙂

How did you get the skunk to show his pearly whites? That’s what I want to know.

Thanks for bringing levity to an otherwise dark day. I needed a good story and a good laugh!

Congratulations, very bravely done! Is there a skunk-retrieval bonus at CBS? And if not, shouldn’t there be one?

Cecily & I want to know why you didn’t use a “custom box” instead of a plastic bag to retrieve the skunk.

I regret that I am unable to attend the funeral. I suddenly remembered my dental appt. at the same time. I don’t know why.

Wow – this is nastier than the dead rats I ferreted out of our crawlspace.

Wow. I can totally empathize, although clearly a stinking, rotting dead cat under our house can’t possibly have been as bad as a dead skunk. Eek!

Even more gruesome, however, was the other dead mummified cat that was found under out house. But I wasn’t nearly as brave as you. We hired someone to remove the stinking carcasses.

I’m still stunned that one of your necessary pieces of equipment was your digital camera. I’d have wanted to get in and out as quickly as possible, which would have meant no time for pictures…

Great post. I agree with Betsy about the camera, although I’m not sure I could ever go into a crawlspace looking for a dead skunk…camera or no camera.

You should read a chapter in Gary Paulsen’s book, Winterdance, entitled “Major Wrecks.” There is a passage about some evening training he did with his sled dogs that may just be the wildest, most hilarious skunk story I’ve ever heard. I had difficulty reading it because I was laughing so hard.

Hope you have a skunk-free Christmas.

I love the difference in the pictures of “JD prior to entering” and “JD post skunk-gathering”. The facial expressions are great.

By the way, you remind me of Jonathan Frakes, especially in that last photo.

Have you given and thought or concern as to WHY you had a dead skunk under your office trailer?