Earlier this year, Custom Box Service inherited three kittens. Jeff was rummaging in the tool shed when he startled a black cat. The cat bolted and hasn’t been seen since. She left behind three kittens, which were about five weeks old at the time. Paul and Amy Jo considered adopting two of them, and Mom took the third and named her Socks. In the end, Ruby — Paul and Amy Jo’s dog — prevented adoption of the other two. They returned to Custom Box with their new names: Max and Duke.

At first, we tried to pawn Max and Duke on unsuspecting souls. (We did well with shop cats during the mid-nineties, but our recent history is less keen. They tend to get squished in the road, or they simply disappear.) We found no takers, though, and soon we came to bond with our little boys; now we wouldn’t think of giving them away.

Both Max and Duke are sweet — sweet in a way that I haven’t seen in a cat since Tintin died.

Duke is black. He looks like a miniature Toto, only he’s not so fat, and he’s not so grouchy. In fact, he’s a little overbearing. He has a squeaky meow, which he uses often. He loves to sit on laps, or to sit on my desk while I’m working. He has a hand fetish — he nibbles and gnaws on fingers, and if you let him, he’ll lick lick lick until your hands are clean. Duke’s specialty is sleeping. He’s been practicing hard, and soon will be ready to enter the sleeping event in the cat olympics.

Max, on the other hand, is training for the bottle cap competition. Even at this moment, he’s out in the hall, delivering a succession of stunning blows to an unfortunate cap. Max is grey with a bit of white on his bib and his paws. He’s sweet, too, but not as willing as Duke to sacrifice his inherent cat dignity. He’s actually quite catlike in demeanor already. Max is fond of play. His favorite trick is to crouch in the grass along the sidewalk and then to spring on passers-by. He’s deadly. 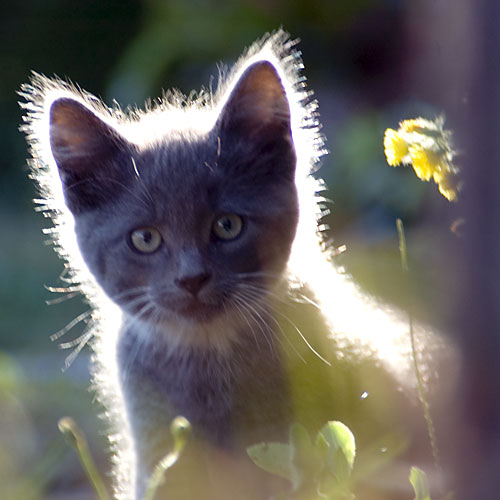 As I say, I worry about their longevity. Cats generally aren’t prone to roaming, despite notable exceptions. They like to have a set territory. Because of this, I’ve tried to convince Max and Duke that their base of operations is the shed in which we first found them. I feed them in the shed. I water them in the shed. (Max likes to drink from the stream of water as I’m pouring it into the bowl.) I encourage them to sleep in the shed. It would be more convenient to have them on the porch, the porch is much closer to the road. It’s my hope that with the distance, and with the trailer as a barrier, the kittens will have no reason to go near the road.

The truth is that if Kris would let me, I would bring these home. If only Toto would croak, maybe I could justify it. They’re a fantastic pair of cats, as fine as any I’ve seen in a long time.

p.s. Yes, the chicken is still around.