Since my epiphany last week about online interaction likely being the source of much of my stress and anxiety, I’ve been doing a lot of introspection. Overanalytical Man is flexing his muscles…but in a good way.

This latter action is huge.

For one, COVID has severely reduced my in-person social interactons. No surprise there, right? I do still chat with people by Zoom, but mostly it’s about business. I rarely have conversations with friends right now.

Well. It occurred to me last week that this isn’t just because of COVID. The reality is that I’ve allowed my friendships to fade over the past few years. And this could be a large part of my recent mental health struggles.

So, I’ve made an effort this past week to have long conversations with friends. I’ve had hour-long calls with Julie and Nick and Cody. Today, I had an hour-long call with my friend Todd (who runs Financial Mentor).

These calls have been great. It’s felt so good to reconnect with people.

As a bonus, because these people know me, they’re able to offer feedback on my crazy idea that maybe I should walk away from everything. Some agree that’s probably a good idea. But most think that I should take a more measured approach. They’re probably right.

During my call with Todd today, he asked a terrific question. I liked it so much that I jotted it down on a sticky-note and stuck it to my computer monitor. Todd asked:

“How could you restructure everything so that you have a maximally fulfilling life?” 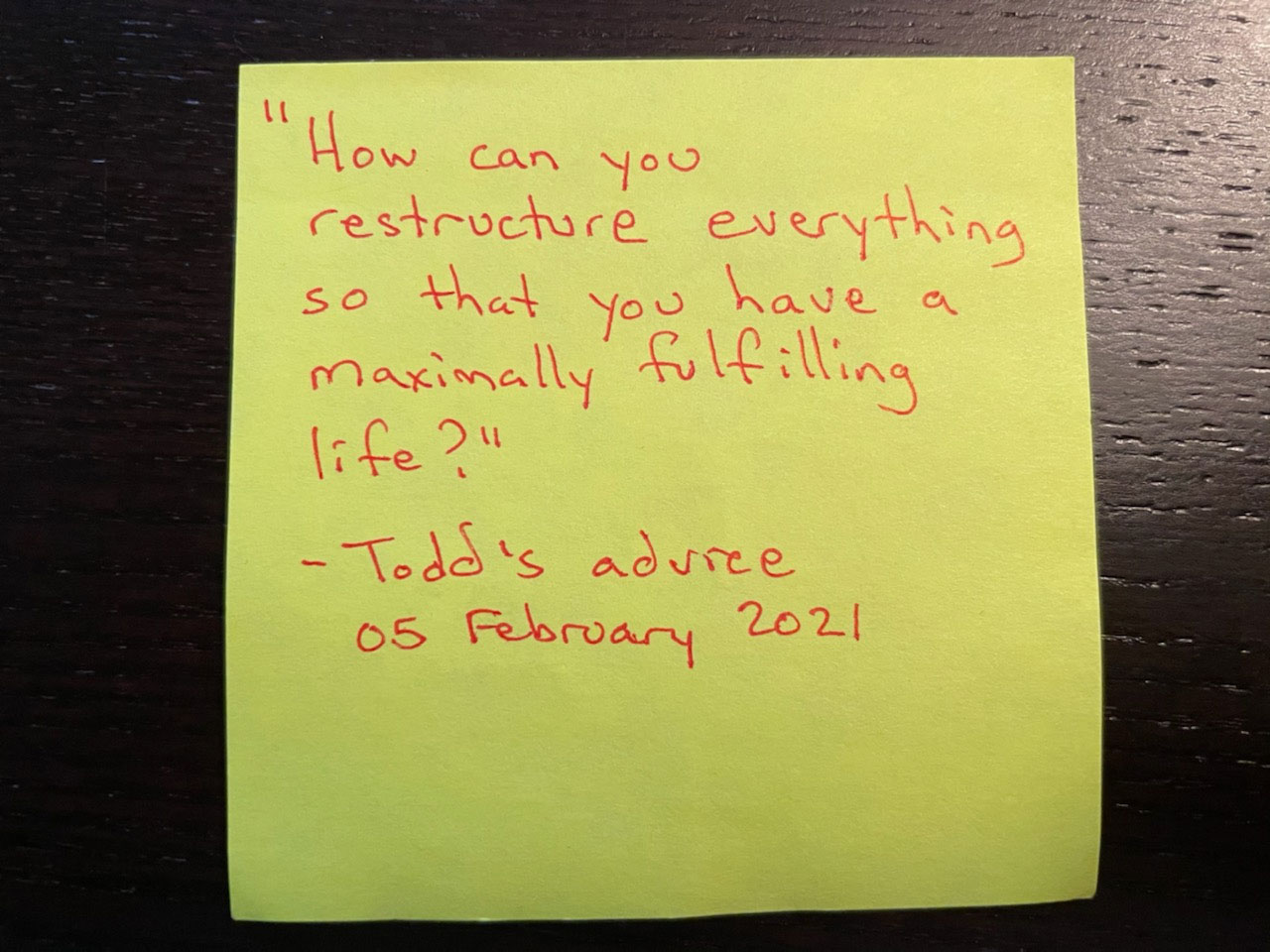 This is, in essence, the fundamental question for folks who are retired or who have achieved financial independence. I love it. It’s especially appropriate for me, obviously, as I’m wrestling with how best to proceed with my online presence.

I don’t know the answer to the question yet, and that’s okay. It’s fun to think about the possibilities.

One thing is for certain (and this became clear while speaking with Todd today). Moving forward, it’s vital that I make choices that are true to who I am and what my needs are. I need to write what I want in the way that I want and to hell with what anyone else thinks about it.

Too often, I temper what I say. Or, more accurately, I restrict what I share at Get Rich Slowly because I think the audience wouldn’t want to read about it. I think this is a huge part of the problem.

Anyhow, I like that I’ve spent the past ten days talking more with my friends. It’s helpful, both in the moment and in the grand scheme of things. I believe that more time with friends is a key component of my maximally fulfilling life.