For the past four months, I’ve been learning Spanish. Three times a week, I meet my tutor, Aly, for ninety minutes of conjugation and conversation. Plus, I spend a lot of time on my own reading Spanish books (and comics), listening to Spanish music, and practicing Spanish flash cards. Basically, I’m in love with the language; if I could do this full-time, I would.

At home, It’s been tough to gauge my practice. Things move too slowly. Aly assures me I’m doing well, but sometimes I don’t believe her. I get frustrated with my progress because I can see there’s still so much to learn!

So, I came here to Peru worried that I wouldn’t be able to cope with the language barrier. I knew the present tense, the future tense, the conditional tense, and both past tenses. But I don’t know the subjunctive, and my skill with irregular verbs of all types is abysmal. Plus, my vocabulary still seems weak. And it’s tough for me to hear the language, let alone speak it.

But after four days here, I’m feeling very confident. I’m nowhere near fluent — that’s going to take years of work — but apparently four months of Spanish is enough to get by in Peru. (Assuming those four months have been spent in diligent study.) What do I mean?

I’ve been able to carry on conversations with several tour guides and all sorts of shop owners. They seem to get a kick out of it. They correct my mistakes, but many of them compliment my Spanish. Maybe they say nice things to everyone, I don’t know. But I suspect their praise is indicative of three things:

That last point is so important. In fact, I’d argue that it’s the key to to language learning. Most of my companions who know a bit of Spanish never speak it because they’re afraid to feel embarrassed. I just use my words as best I can (steering clear of those damn irregular verbs). I get by.

In fact, I do better than just get by. I have fun asking Peruvians about their lives, and they seem to enjoy sharing, if only for a few minutes. Plus, I get people on my side. When I talk to them in their language, they smile. They offer to do more for me (except that taxi driver in Lima, who took more from me).

Note: Because I’m willing to speak Spanish, I’ve acted as translator a few times on the trip. How fun is that? If we’re somewhere that the locals don’t speak English, I get to use my Spanish to moderate to order food or buy trekking gear. (But if Nigel or Rae are along, they get to play this role. Their Spanish is better.) And I helped one fellow pull money out of a Spanish-only ATM.

I think my favorite moment so far has been getting a shave. I’ve never had anyone else shave me before, but when I saw our hotel in Cuzco offered shaves for ten soles (about $4), how could I refuse? I asked the woman in the salon, Rosmarina, if she could shave barbas y bigotes. She smiled and said she could. 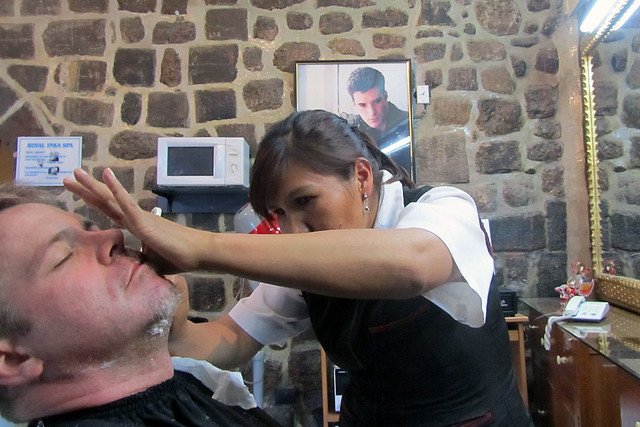 Rosmarina hacking away at my beard.

My beard is tough — “muy fuerte” is what Rosmarina and I decided — so the process was something of an ordeal for both of us, but we made it through. (It’s because of these tough whiskers that I have a beard and moustache in the first place — it’s painful to shave.) Rosmarina had told me she spoke English, but I think my Spanish was better, so we used that. She complimented me on my abilities.

I should note, however, that I don’t do well with time pressure. I have great chats in Spanish when the other person can take the time to help me along. But if they’re under time contraints — taking an order in a restaurant, say, or ringing up a purchase in a busy bookstore — I’ve found it’s better to switch to English.

But if I have time to talk with the other party? Well, things are great. Yesterday, I was talking with one of the tour guides, and he asked me how long I’d been learning Spanish. “Four months,” I said. He was surprised. “But your accent is perfect.” I laughed heartily at that one. My accent is terrible. But again, I try. And that’s what counts.

I’m not sharing these things to brag. There’s little to brag about. I have many frustrating conversations in which the other person doesn’t understand me and I don’t understand them. Instead, I’m trying to show that it’s very possible to get by in Peru with only four months of Spanish. I want to show the power of making an effort, to illustrate why you should embrace the imperfection. And I want you to understand how much of a psychological boost you can get just from that.

Success breeds success. When you take risks and are rewarded, it makes you more willing to take more risks in the future. It’s important to fail too, of course, but I’m finding that four months of Spanish is certainly enough to get by in Peru.

I don’t plan to stop here, though. When I get home, it’s back to lessons with Aly. I don’t want to just get by in Spanish. I want to become fluent!