As much as I make fun of little Nemo, I have to admit he’s our fiercest hunter. Mostly he hunts his sister Toto (which makes her hiss) and his brother Max (which makes him growl). But he also likes to hunt other critters, especially baby birds.

Perhaps his favorite prey, however, is the squirrel that lives in the walnut tree. He hasn’t caught Walnut yet, but that doesn’t stop him from trying.

Just now, for example, I was sitting at the table eating my raisin bran, when I heard Walnut begin his awful racket. He sounds like a chicken. I looked out the window, and sure enough: There was Nemo chasing Walnut up the tree. What cracked me up, though, was that Walnut paused halfway up to let Nemo scoot right by him. “Psych!” 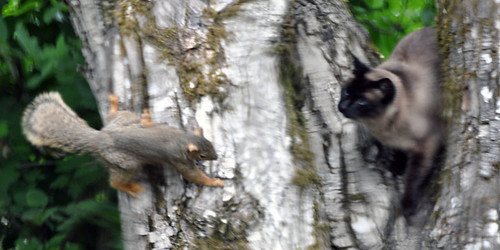 Blurriness is from the old glass in the window

I’m not sure Nemo is actually serious in his squirrel hunting, though. And I’m not sure that Walnut is serious about escaping. The pair of them spent about five minutes in a cat-and-mouse game (well, cat-and-squirrel, I guess), but neither seemed willing to follow through.

Walnut, for example, could have dashed up the tree at any time. He didn’t. Instead, he’d often creep closer and closer to Nemo. For his part, Nemo could have tagged Walnut during a couple of these moments — he was easily within paws’ reach — but he didn’t. Nemo and Walnut were content to jockey for position. 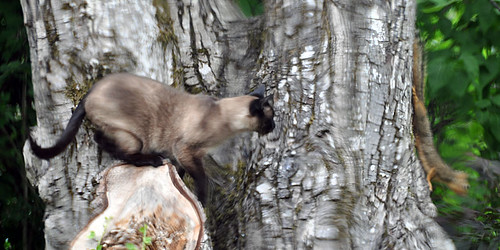 Blurriness is from the old glass in the window

What broke this stalemate? One of our resident crows* came along to break things up. He landed on a nearby branch and began to caw at the two combatants. (Or are they playmates?) Nemo decided that he was no match for squirrel and crow, so he retreated to the picnic table.

Walnut actually seemed disappointed. He came down to scold Nemo from close range. It didn’t have any effect. When the crow left, Nemo came into the house. He’s now sound asleep upstairs on the bed. (Which is where he usually is…)

* This year, Rosings Park is home to a family of crows. Or something. These crows don’t behave like any crows we’ve ever seen. They come down to eat at the feeder. They drink from the birdbath. They interact with the other birds. And, as I just mentioned, they play a role in the goings-on around the yard. (I mean, really: Breaking up a fight between a cat and a squirrel? Why?) We have no idea how long the crows will stick around, but it’s fun to have them.