Greetings from Paris! For almost a week, Kim and I have been exploring the city from an apartment near the Sentier metro stop. Every day, we walk down Rue Montorgueil, a bustling pedestrian thoroughfare filled with produce stands and fish shops and boulangeries. With all the people packed into cafés, it feels very much like Rue Cler (where Kris and I stayed in 2010), but with more average Parisians. And at night, if we mistakenly take the next street over, we can see sex shops and streetwalkers. Quite the contrast!

We’re actually very pleased with our apartment. It’s small but functional, and the location is perfect. 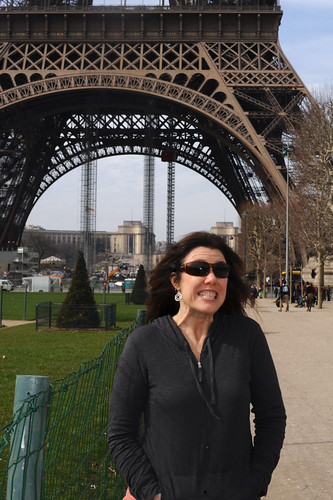 Kimberly, preparing to climb 667 steps to the second floor of the Eiffel Tower

When I was here three years ago, we spent a lot of time exploring the famous landmarks of Paris: the Louvre, the Eiffel Tower, the Arc de Triomphe, and so on. Kim and I have done some of that. We actually climbed the Eiffel Tower, for instance (something I didn’t do last time), and we made a quick tour of the Louvre (with an epic journey to locate the Dutch masters). But mostly we’ve done a lot of walking — and we’ve eaten a lot of wine and cheese.

Note: Kim had shoulder surgery three weeks before we left for this trip, which is a mixed blessing. We wouldn’t have been able to take so much time together to explore Paris and — eventually — London and Oslo if she weren’t required to take eight weeks off work. But the sore and healing shoulder is also a liability. It limits the things we can do. And on our way back from climbing the Eiffel Tower, she stumbled at the top of the stairs from the subway. She managed to not land on her shoulder, but she was still sore for days after. 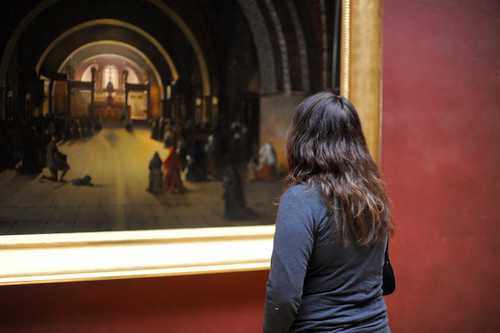 Taking in the art at the Louvre

On most of my past trips, I’ve had a fairly clear agenda: I’ve known where I wanted to go and what I wanted to see. But when Nick and I traveled to Turkey last September, I had a hell of a lot of fun by not planning things. We sketched in where and when we wanted to be, but for the most part we just made things up as we went along. Because Kim and I both like to “go with the flow”, we decided to do the same sort of thing on this trip (with the notable exception of Norway, which is very planned). 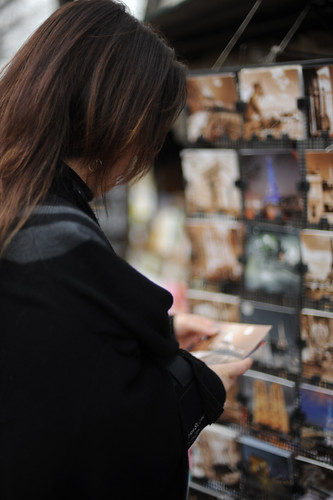 Browsing the streets of Paris

As a result, we’ve spent our days in Paris just wandering the streets. When we find something that looks interesting, we stop to take a look. Some days we set out with a destination in mind, but we don’t always reach it. Yesterday, for instance, I wanted to visit the Orangerie (a museum of impressionist art) and the Arc de Triomphe. We didn’t do either. We stopped outside Notre Dame to sit in the sun, and then wandered again into the Latin Quarter where we fumbled our way through the alleys of shops and cafés. We stopped for crepes. We looked in shop windows. We bought a painting. 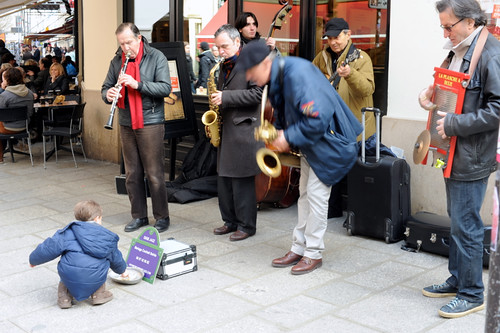 Eventually we crossed the Seine to Champs-Élysées. We stopped on a side street for a glass of wine, and I was startled to realize that we’d managed to find the exact same restaurant where Kris and I had a miserable meal of lousy steaks three years ago. (The wine that Kim and I had this time wasn’t much better.) 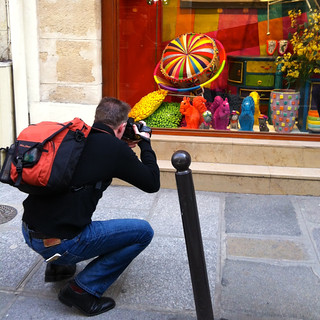 A common sight on this trip: Me with my camera

In the evening, we celebrated my birthday with a delicious meal at Le Patio Provençal, a restaurant recommended to me by Nomadic Matt.

We had a great day today, too. We booked a wine and cheese tasting at O Chateau. As we’ve done so many times since arriving here last Thursday, we consumed a ton of wine and cheese.

Our hostess, Charlotte, served us five wines and five cheeses. The pairings were fantastic, especially the last two. For the record, we got to try:

You’ll notice that I’ve listed the wines a couple of different ways. That’s because French wine is classified different than American wine. In the U.S., our wines are sold by grape varietal. We buy a cabernet sauvignon or a merlot or a chardonnay, for instance. That’s not how the French buy wines. They buy based on region: Bordeaux or Champagne or Beaujolais. (Actually, they buy by subregion or terroir.) The French feel that the place the grapes are grown has as much impact on the quality of the wine as the grapes themselves.

Anyhow, we had a lot of wine and cheese for lunch today. 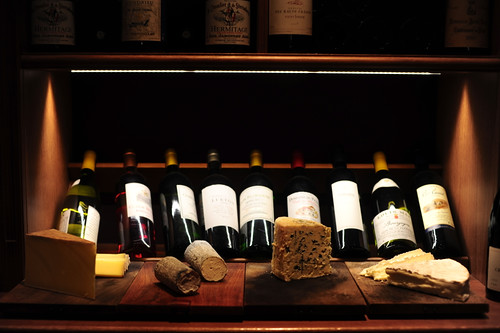 Our cheeses today at O Chateau

Actually, I’m beginning to believe that Parisians are fueled by just three “nutrients”: wine, cheese, and bread. For the past week, that’s what I have been fueled by.

The day we arrived, we picked up some bread and goat cheese to eat for our breakfasts. A couple of times, we’ve eaten at Au Rocher de Cancale, where I’ve had wine and cheese. I’ve had wine and cheese for nearly every meal, as a matter of fact. You might think that after a week, the wine would be catching up with me, but it’s not the case. The cheese, on the other hand, is causing problems.

Thankfully, we’ll soon be moving on to lands where cheese is less plentiful. On Thursday morning, we’ll take a train across the English Channel, rent a car in London, and then gradually make our way north to Edinburgh. Maybe we’ll see Stonehenge or stop in Bath or catch a soccer match in Liverpool. We’re not sure. And you know what? We don’t care. We’re having a lot of fun just making things up as we go along.

Now, if you’ll excuse me, it’s time for dinner. I think maybe I’ll have some wine and cheese…