My Thanksgiving weekend was as close to perfect as is reasonable to expect, a balance of productivity, sociability, and fun.

What makes a perfect weekend? For starters, it’s a four-day weekend. Add to this plenty of mashed potatoes with ketchup; a chance to relax with hot cocoa and toast; and, most importantly, time with a variety of friends.

Our family Thanksgiving gathering was larger than normal. My cousin, Nick, joined us, as did Kris’ sister, Tiffany. Tony and Kamie (and their kids) were actually present and on time. The food was good and, as usual, I ate too much. After dinner, we played games (including a marathon session of Apples to Apples). 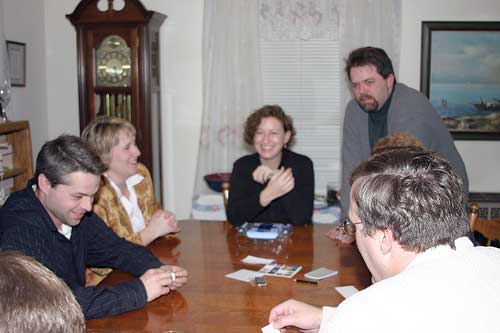 photo by my mother

I spent a few hours at work on Friday, but it was basically wasted time. There wasn’t a single call or fax. I spent most of my time drooling over comic book compilations. Yes, I am a geek.

On Friday evening, we ventured to the Portland City Grill to attend a wedding reception for my boyhood chum, Andrew Parker, who married the lovely and vivacious Joann Mangold last month in San Francisco. The food and wine were terrific. I was pleased to see Andrew’s sister, Laura, for the first time in twenty years. We sat with Dave and Karen and Andrew and Joann. We had a good time reminiscing and getting to know Joann better. At one point, Dave provided a warm and witty toast to the couple, utilizing his keen Toastmaster skills. 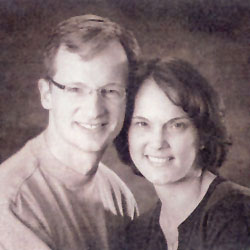 Kris and I worked outside in the cold and the damp on Saturday. We raked leaves and pruned roses. Simon climbed onto the roof of the garage and pranced around, proud of himself. In the afternoon, I dropped by Mitch’s place to help celebrate his daughter’s tenth birthday. Between cake and presents, Zoe taught me how to play Pokemon. I must not have learned very well: she kicked my ass.

I did better playing poker on Saturday night. Sabino hosted a small tournament featuring two tables of five players each. Each player bought in for $22. The winner received $120, the second-place player received $60, and the third-place player received $20. Perhaps the remaining $20 must have gone toward the five enormous pizzas we shared. (Each person also kept $3 to use as an additional wager any time he went “all in”.)

I’ve never really played poker before, so I was a little wary. I spent some time Saturday googling for tips. The most common advice for novice poker players seems to be: play conservatively, fold often, do not try to bluff. I tried to follow this advice, and it served me well. After a couple of hours, only four of us remained. This group played to a virtual stand-still for ninety minutes, and then weariness began to take its toll. I began to fold hands (such as K-7) with which other might have at least paid to see the flop. Several times, I threw away what would have been a winning hand. Goaded by these poor choices, I started erring in the opposite direction, semi-bluffing on hands that ought to have been played more conservatively. In the end, I went all in with a suited ace-queen (after a flop that turned up another card of my suit and a ten or a jack), but didn’t even get a pair. I didn’t care; I was tired, and I’d had a lot of fun. I’m not the kind of guy who often gets invited to play poker, but maybe I’ll get another chance sometime.

Sunday was a slow day. After enjoying hot cocoa and toast, I finished the leaf-raking project. We took some scones to John, our neighbor across the street, as a thank-you for some home-made grape juice he’d given us a couple weeks ago. He was happy to take a break from pruning his cherry tree so that he could tell us about his trips to Alaska and New Zealand. He also gave us mulching tips. Tom and Roberta, the older neighbor couple next door, came out to join the conversation. They offered advice on pruning fruit trees and propagating grapes. Tom fetched us a large winter squash picked directly from his garden.

For dinner, Kris and I made our favorite steaks. Later, I sat in a hot tub and read comic books. Actually, I read a lot of comics over the weekend: Jonah Hex, Persepolis, Elfquest, Thor, and Doom Patrol. I am a comic book geek.