I had grand plans for the weekend. I was going to study my Latin, finish a computer repair, do my chores, and maybe go see Sideways, one of the films nominated for Best Picture. I got sidetracked, though, and very little of that got accomplished.

Kris and I have been lamenting that our new house is too big for us. We have three rooms that sit essentially unused. It occurred to me the other day that we could reduce this to only two rooms if we moved all of our books downstairs. (This would have the added benefit of removing their mass from the oh-so-scary bouncy floor in the room where they’ve lived for the past six months.)

Kris agreed that this was a keen idea, and we decided that we’d work on that in the summer, after we finish the bathroom remodel.

Only we couldn’t. Once the seed was planted, the idea grew in my mind until I found myself hauling books and bookshelves downstairs. (We saw Celeste yesterday. She helped us move into this house; she was one of the army of laborers that carried endless boxes of books up the stairs. When we told her we were moving all the books downstairs, she was aghast. All her labor for nothing!)

Once I had been sidetracked by this task, I could not stop. I even took a vacation day from work so that I could stay home today and finish the job. (And all the jobs that I neglected this weekend in favor of moving the library.)

Now that the work is nearly finished, I’m mostly pleased with the result. Things aren’t perfect. They won’t be until I teach myself to build my own custom bookshelves, but I’m in no rush to do that. Maybe next year. Or the year after.

For now, we’ve added another usable room to the house, and that makes me happy.

Here are some photos: 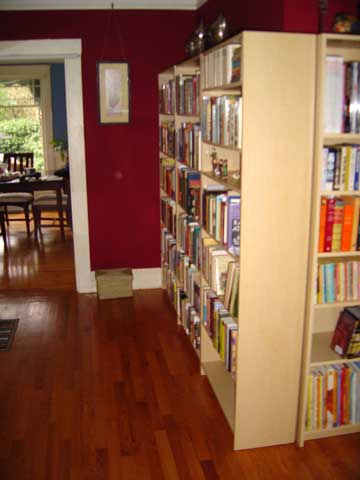 This main wall of books &mdash literature — is where the desk used to be. 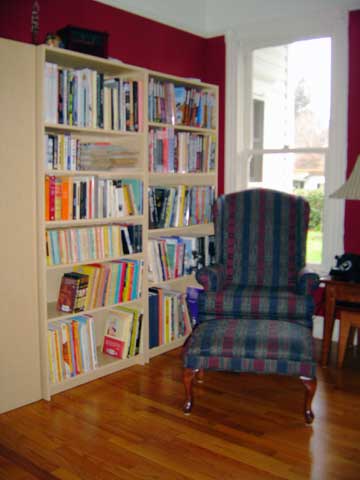 This chair has moved only a little, but now receives soft light from the south-facing window. 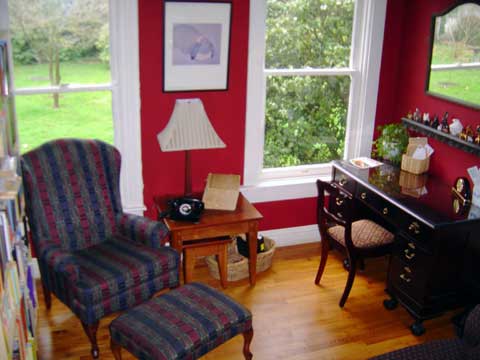 This is a nice sitting area now; the desk has replaced the loveseat.

(Note that these photos studiously avoid the elephant in the room. We have a reclining love seat that used to sit where the desk is in the final photo. That love seat is still stuck in the room. We can’t get it out. It’s big and bulky, and too much for us to handle by ourselves. We’d love to get it upstairs, but that seems impossible. If any of you want it, contact us — we’ll make you a deal!)

I still haven’t told the story of my craigslist swap for a new (used) digital camera. It’s the source of all my photos recently, and I can’t decide whether I’m pleased with it or not. There are things I like about it, but I’m concerned with the photo quality. I can’t seem to get the damn thing to focus properly, and often the colors seem bright and funky. I’ll have to play with it…

What is going to happen to the room upstairs where the books were?

That is a fine question, one to which I do not have an answer. We left the science ficton books in there, but other than that, we don’t know what to use the room for. Kris though maybe a craft room, and that sounds keen, but we’re open to other ideas.

How about a karaoke room?? It would incorporate both your love of singing and cheesy 80’s music!

Why not make it a “World of Warcraft” room? Nevermind, I’d never see my husband. Sigh.

Collapse is covered – though I can’t say that means I condone a cheesy 80’s karaoke room.

I have no idea what to do with the other room. I spose you could have a kid and turn it into a nursery.

The real reason i paused to jot this note is to say how much I love the color of that red room. It’s been my favorite room from the start. I could totally sit in there all day.

Hey why don’t you open a weekend bed and breakfast?

Thanks for helping us move on Saturday . . . I can’t believe you moved more books on Sunday . . .

Thanks for helping us move on Saturday . . . I can’t believe you moved more books on Sunday . . .

JD, almost all digital photos need sharpening — could that be your “focus” issue? I use unsharp mask (200%/0.3pixels for nearly everything) in Photoshop.

Layoff Tammy!
Why can you not respect the decisions that J.d. and Kris have made for their life?

Tiffany, relax! Have you ever heard of teasing? Mercy! Jd has never once given me any reason to believe that it bothers him if I tease him about kids.

I totally respect their decision. People tease me about *having kids*. I don’t go around with my knickers in a twist over it. I never even thought to let it bother me. It’s all in fun.