Talking with strangers about money

Kim and I are back from our two-week tour through Florida, a sort of “vacation from our vacation”. We’ll resume our R.V. trip across the U.S. in a few weeks, but after crunching the numbers we realized it’d be more cost-effective (and time-efficient) to leave the motorhome in Savannah and drive the Mini Cooper across the Sunshine State. So that’s what we did.

Although most of our trip was about play, we both took some time to work. Following three days at Disney World, for instance, Kim joined a weekend retreat with a small group of entrepreneurial women. (Kim has spent all of her working life in the dental field; over the past six months, however, she’s been following Steve Chou’s program for creating an online store. She’s very proud that her endeavor has netted about $300 while Money Boss is thousands in the hole!) Meanwhile, I drank beer and smoked cigars in Tampa’s Ybor City.

Most of my “work” on the trip came through talking about personal finance with the people we met. You’d be surprised at how many conversations you can have about money if you allow yourself to be open to it.

Let me give you an example.

While in Miami, Kim and I stayed in a guesthouse we found on Airbnb. (I’m a huge fan of Airbnb. I’ve used it to find cheap places to stay all over the U.S. — and the world.) Our hosts were a Cuban couple with an entrepreneurial mindset. They used to have an outbuilding they used as an office. After the husband retired early from his job as a contractor, he converted the space into an amazing 400-square-foot living area, complete with bathroom and kitchen.

This guesthouse now supplements their income. At $120 per night, our hosts earn $20,000 to $30,000 every year — all from a space that might otherwise have gone unused. To me this is a win-win: They earn some extra money while we save on the ridiculous Miami hotel prices. (For more about this sort of thing, check out Paula Pant’s series of articles on how she became an Airbnb host.)

But the money conversations didn’t stop there! 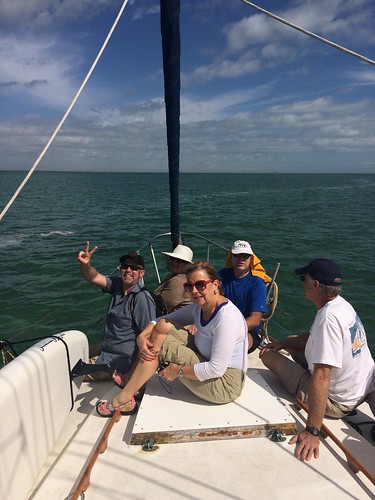 While in Miami, we splurged on a sailboat ride through Biscayne National Park. As Kim and I basked in the sun, we chatted with the other two couples who’d paid $149 per person for six hours on the water. Turns out they were financially independent too.

The first couple — let’s call them Bill and Mary — was in their mid-fifties. They retired early after building an empire of thirteen McDonald’s franchises in upstate New York. Their income and savings (and choices) are sufficient to support a luxurious lifestyle. Like us, they tend to spend on travel. But while Kim and I look for ways to cut costs on lodging, they’re willing to spend more. It’s important for them to be comfortable. (On the other hand, they’re not willing to spend a lot on a rental car. They get the cheapest model available.)

The second couple — let’s call them Mike and Laura — was a bit younger, maybe in their early fifties. Their jobs had been more blue collar. (Laura was a teacher; I can’t remember what Mike did.) But because they’d been careful spenders and savvy investors, they were able to retire by age fifty. They too liked to travel.

As our boat scudded across the water, Mary asked me what made it possible for us to travel for eighteen months in a motorhome. “What do you do for a living?” she asked.

“It’s an important subject,” Mary said. “Especially for young people. Nowadays, they’ve got it hard. This economy makes it tough for kids just starting out.”

When she said this, I had to take a few deep breaths. Without knowing it, Mary had hit on a sore subject. I took time to compose my thoughts. A pleasure cruise is no time to get into an argument about money and economics!

“You know, I don’t really think that’s true,” I said. “Young people today have it easier than any generation in U.S. history. They have everything they need. I think the difference is their expectations are greater. They expect more and they’re unhappy when they have to start at square one. It doesn’t help that the media is constantly harping on how hard Millennials have it. Kids hear it and then they believe it. It becomes a self-fulfilling prophecy.”

I thought about all of the teens and twenty-somethings I’ve met over the past five years who, instead of buying into the “kids are screwed” storyline, have managed to find great jobs and build successful careers. Some are even well on their way to early retirement!

Fortunately, Mike jumped into the conversation before I could make an ass of myself.

“I don’t think kids have it that tough now,” he said, “but many of them don’t know how to manage their money. Most of the kids we know have had things given to them all their lives. That makes sense because they’re kids, after all. But we’ve tried to give our own daughters the skills they need to survive on their own.”

“How so?” I asked. Because I don’t have kids, I’m always interested to hear how parents teach their children about personal finance.

“Well, our daughters had jobs when they were in high school. That’s one thing. You see, they knew that Laura and I were only going to pay for two years of college. They had to fund the rest.”

“That seems fair,” I said. “I actually think that parents ought not pay for their kids’ college education. If a kid wants to go to school, she should fund her own way. It’s not a very popular opinion.”

“I can see why that idea might be unpopular,” Mike said, laughing. “But look, I don’t completely disagree with you. In fact, that’s why Laura and I only pay for two years of college.”

Mike smiled. “I think the reason most parents want to pay for college is that student loans are so onerous. They’re really a nightmare. But we’ve found a way around that. We’re the Bank of Mom and Dad. Instead of taking out student loans, our daughters borrowed the money from us — with a twist.”

“What kind of twist?” asked Mary.

“Well, after graduation, I took each girl on a trip to Europe. While we were there, I sat them down and said that Laura and I would forgive their loan on one condition: They had to open a retirement account. Whatever money they might have repaid us has to instead be invested into this account. If for some reason they don’t invest the full amount, then the deal is off. They owe us whatever they borrowed.”

“Is this working?” I asked.

“You bet!” Mike said. “Our oldest daughter has already put the full amount into retirement. And now she’s continuing to save because she got in the habit. Our youngest daughter seems to be on the same path.”

“I love it!” I said. “That almost makes me wish I had kids so I could so the same thing. Almost.”

Just then we sailed into Boca Chita Key. For the next two hours, the six of us snorkeled and kayaked and lounged on the beach. On the trip home, the talk turned to non-financial topics. (We were hungry, so mostly we talked about our favorite restaurants around the country.)

Following five fun-filled days in Miami, we drove south to Key West. Later, on our way north, we stopped to have dinner with Joshua Sheats and his family. Sheats is the host of the excellent Radical Personal Finance podcast. I admire his deeply thoughtful approach to money and economics. 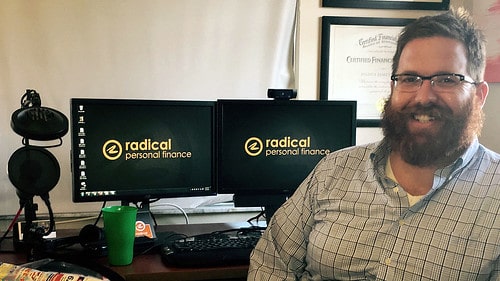 Our final Florida stop was in Titusville, home of the American space program. As a life-long astro-nerd, I was blown away by the quality of the exhibits and programs at Kennedy Space Center. Well-worth a visit.

While in Titusville, Kim and I stayed at another bed and breakfast, The Wayward Traveler’s Inn. This time our hosts were a family that had recently moved from Utah to Florida. Roan, the husband, is an engineer and aspiring author. Karrie, the wife, is a former (and current?) teacher. We liked them a lot.

A few years ago, Roan and Karrie decided they wanted to do something adventurous. They asked their kids (then in their early teens) to make a list of the things that were important to them. Roan and Karrie did the same. When they compared notes, they found that the whole family valued travel.

“What if I took a sabbatical and we traveled the U.S. for a year?” Roan asked. Everyone agreed it was a great idea, so that’s what they did. They sold all of their stuff, bought a motorhome, and explored the country for 365 days. (The kids stayed in school while they were on the trip. They did online courses.)

When the trip was finished, they held another family meeting.

“How would you feel about moving?” Karrie asked the kids. They were all for it. “Your dad and I are thinking of buying an RV park in Long Beach, Washington. Would you be okay with that?” Indeed they would. Long Beach — not far from Portland — was the family’s favorite spot on their trip.

Ultimately, the plan to buy the RV park fell through. Because all four are Disney nuts, they turned their attention to the Orlando area. Last year, they bought an old house that could be converted to a bed and breakfast. After six months of hard work, the B&B is now up and running. Meanwhile, Roan continues to work as an engineer (and to write in his spare time).

Do Talk to Strangers!

As you can probably tell, we had a hell of a lot of fun in Florida. Not just because we did all of the touristy things we were supposed to do, but also because we took the time to talk to the people we met. (Kim connected with our hosts in Miami and Titusville because they’re motorcycle riders like she is. I talked about money; she talked about bikes.)

I know it’s deemed gauche to talk about money with strangers. That’s too bad. There’s a lot to be learned by comparing notes with the people you meet in your daily life. Plus sometimes these conversations can turn into actual friendships and business opportunities!

Note: Kim and I plan to hit the road on March 29th. We’ll make our way northwest from Savannah to Tennessee and Kentucky. From there, we’ll drive to St. Louis, the Ozarks, and northeastern Oklahoma. In May, we’ll cut back through Mississippi and Tennessee to Alabama, where we’ll drive south to New Orleans. We think we’ll spend all of June in Texas (it’s a big state!). In July, we’ll re-explore the Southwest before stopping to see all of our blogging buddies in Denver. In August, we’ll move to the Yosemite area. Kim will spend time with her brother while I fly home for a conference in Portland. (More about that soon. Hint: Mr. Money Money Mustache and I will be co-presenting.) We’ll close out the trip by winding our way through eastern California, Oregon, and Washington in September. If you live somewhere along this route and want to meet up, drop me a line. I can’t promise anything, but I’ll do my best to make it happen.