For a guy who never wears a suit jacket, I sure have a lot of them. As part of Project De-Clutter, Kris had me parade before here wearing each jacket in turn. I paraded ten times. Where did all of these come from?

The two I like best were both thrift store finds. They’re both wool sports coats in varying shades of brown and grey. They fit well. They move well. I might even enjoy wearing them! (I don’t think I’ve worn either of them before.)

The second best pair were, I think, donations from Jeremy Gingerich. They’re both the same size and style, just different colors. They fit okay, but are a little tight in the shoulders. As I continue my wellness regimen, they’ll probably actually fit just right eventually. The best part is that they come with matching slacks.

Then there are the four different navy blue jackets I’ve acquired over the course of my life. My father bought me one of them: it was my salesman’s uniform for several years when I was just out of college. It fits well enough, but I just don’t like it. The other two are way too big. (I suspect they’re also thrift store purchases.)

The last two jackets are no good: one is just too big, and the other is my Vernon Dursley jacket from oh-so-long ago. 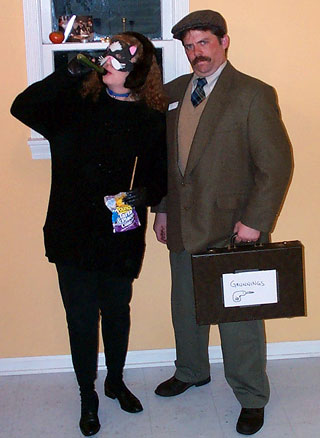 Inside the breast pocket of the Vernon Dursley jacket, I found a cigar of the type Jeremy brought for us to smoke at that gathering. In fact, I’ve closed the door to my office and am smoking the cigar now. (It’s only a matter of time before Kris becomes enraged with me for this.) 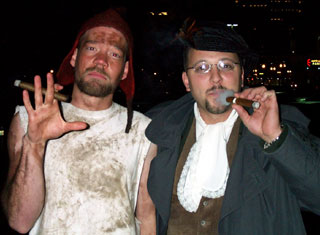 These cigars were better five years ago, when they were fresh…

My other jackets contained goodies, too. One contained my ticket from Don Giovanni last May. Another contained the cork from a wine bottle. And a third contained banquet tickets from the 1999 Oregon FBLA State Leadership Conference — that was the year I helped Linda Kavan chaperone various events.

In any event, I’m only keeping five jackets, but even that seems like overkill. I’ll keep the two nice sports coats, the two suits from Jeremy, and the navy jacket that Dad bought me. (Though the latter may actually be purged soon, too.)