For the past four nights, Kris and I have watched the eight-hour PBS series Texas Ranch House. Like the other “House” shows before it, Texas Ranch House transplants a group of contemporary Americans into a particular historical era — in this case, the Texas frontier of 1867.

At the start of this show, a Foreman, a Cook, and a group of about half a dozen Ranch Hands prepare a homestead for the arrival of the new Owners, Mr. and Mrs. Cooke, and their three daughters. The Cookes bring with them a single retainer: Maura, “a girl of all work”. Over the course of 2-1/2 months, the Cookes and their employees are responsible for making the ranch a viable business. In the short-term, this means rounding up and branding as many free-range cattle as the Cowboys can find.

As always happens on these shows, though, the task is complicated by strong personalities and by the participants’ refusal to discard 21st century notions in favor of modes of thought and work that are appropriate for the era in which they’re pretending to live. And, as on previous shows, certain personality types drive me nuts. This time it’s Mr. and Mrs. Cooke who create a perfect storm of self-centered obliviousness destined to doom the ranch.

From the start, Mr. Cooke is unable to maintain the respect of the Ranch Hands. They feel he’s incompetent, and not true to his word. He fires his Foreman within days. He fires the ranch Cook soon after. (Though, to be fair, he deserved to be fired.) When another Ranch Hand quits, the initial work force has been decimated, and Mr. Cooke continues to struggle with bunkhouse morale. Matters are made worse because the Hands feel that Mrs. Cooke is actually running the ranch, and because Maura the “girl of all work” feels oppressed by gender roles, and because Mr. Cooke is pathologically incapable of making and owning a decision. (The Ranch Hands seem to do little to make things better on their end.) 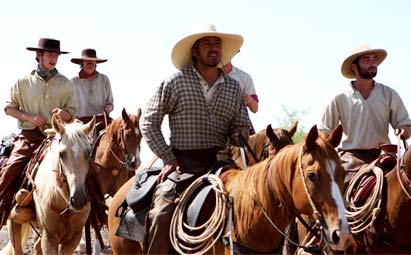 One day two of the Ranch Hands (and their horses) are “kidnapped” by Commanche Indians. In 1867, these men would have been killed, but for the purposes of the show, the Commanche leader comes to Mr. Cooke to barter. He’s willing to trade horses for some of the ranch cattle. He’s also willing to trade Jared, a Ranch Hand, for cattle. (He’s already let the other Ranch Hand free.)

Mr. Cooke is eager to trade for the horses, but not for Jared. “I refuse to trade for human life,” he says, as if this is somehow a noble moral principle. He is unable to view the situation from the point-of-view of the Commanche, or of the Ranch Hands. The Commanche chief tries to give him outs, but he doesn’t take them. In the end, the swap is made, and Mr. Cooke performs complex mental gymnastics to convince himself that he’s not trading for Jared’s life. (This incident further damages his reputation in the eyes of the Cowboys. Does their Boss not value them enough to save them from danger?)

The Commanches pull a fast one on Mr. Cooke, trading him one less horse than he believed he was getting. He doesn’t bother to count until they’ve ridden away from the Commanche camp. (This isn’t the first math mistake he’s made. This man, who is a hospital accountant in real life, initially calculated that he’d need eighty cattle to make his mortgage payment whereas the real number was closer to 200. At the end of the project, when the Project Evaluators deem his books “indecipherable”, Mr. Cooke’s excuse is that he doesn’t have a caluculator.)

In the final episode, the repercussions of the Commanche incident become apparent. In order to make the mortgage payment, Mr. Cooke must sell a certain number of cattle to an Army Outpost. His Cowboys drive 131 head of cattle to the designated location, where they discover that the Army will only buy the 86 animals that are ready for slaughter. The Buyer is a nice guy and gives Mr. Cooke a good price ($25) for each animal. He then lets Mr. Cooke convince him to buy the remaining cattle at a reduced rate ($18/head). It’s obvious to everyone but Mr. Cooke that the Buyer is playing along to give him a good deal for the sake of the project.

Rather than reward his Workers for their performance, when it comes time to settle payment, Mr. Cooke is a complete asshole. He takes delight in being a skinflint. The Cowboys are hoping to purchase horses from him, but he asks exorbitantly high prices. “I’m so proud of you,” his shrew of a wife coos after each cowboy has marched away in anger. (I kept thinking of Iago as I watcher her machinations.)

Mrs. Cooke is especially proud when Mr. Cooke re-negs on a deal he’d previously struck with Jared. Before the Commanche incident, Mr. Cooke had sold a horse called Brownlow to Jared for $25 (to be deducted from his final pay). Jared loves Brownlow. When settlement arrives, Mr. Cooke claims that Jared lost the animal to the Commanche and that the horse rightfully belongs to Mr. Cooke again. “I had to pay to free you,” he says. Never mind that in negotiations with the Indians he had made a huge deal about how he wasn’t trading for Jared’s life, how the very idea was abhorrent to him. Jared is shocked. He says that he’s going to take Brownlow because the horse belongs to him. “I’ll beat the shit out of you if you try,” says Mr. Cooke.

“I’m a man of my word,” Mr. Cooke told the Ranch Hands at the start of the project. “Honesty and integrity are important to me.” Except for when they’re not, apparently. The film editors have done a fine job of showing us what Mr. Cooke actually says, and then revealing how he often goes back on his word later, sometimes doing the complete opposite of what he had promised to do.

After the settlement, Mrs. Cooke convinces her husband to actually fire Jared, even though there are only two days left in the project. He does. When Jared rides off on Brownlow, the other Cowboys leave with him. Mr. Cooke doesn’t beat the shit out of anyone; he stands by with his family, accusing Jared of being a horse thief. Pot, kettle: black. He seems completely unaware that if this were 1867, he would have just doomed his ranch to failure. How’s he going to prepare for winter with no crew? 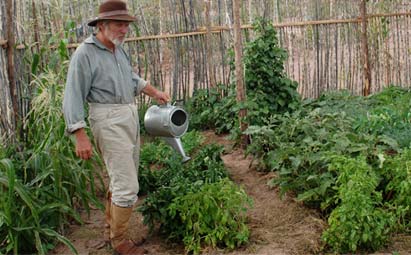 At the end of the project, the participants are evaluated by a team of Experts. The experts aren’t especially kind to anyone — Cooke family, Maura, or Cowboys — noting that not a single person truly embraced the roles of 1867. Nor did anyone exercise compassion or teamwork. The evaluations are especially harsh for Mr. Cooke, and rightly so. His family is appalled by the criticism, but that’s only because they live under a cloud of collective delusion. They are lazy, manipulative, dishonest, and pampered.

I feel that there is some common element that ties this show to Frontier House, but I cannot put my finger on it. (Frontier House is my favorite of this series; I just added it to our Netflix queue.) In each of these shows, a certain group of participants buys into the experience wholly, but another group treats it as a lark.

In Frontier House, Gordon Clune and his family continually circumvented the project by smuggling in makeup, trading with 21st-century families for box spring mattresses, and generally acting like asses. In Texas Ranch House, Maura — a woman I admire and whom I would love to be friends with in real life — is unwilling to do what she signed up for: play the role of an 1867 ranch Maid. She wants to break out of the gender roles. The Cooke family is indolent and self-absorbed. They constantly lay the project’s problems at the feet of their Ranch Hands, despite the absurdity of the proposition. (What? The entire group of Cowboys is trying to do you in?) When you have to fire your Forman, your Cook, when you have a poor working relationship with your new Foreman, and then when your entire staff quits in disgust, perhaps the problem isn’t with the help — perhaps the problem is with YOU.

The difference between the Clunes in Frontier House and the Cookes in Texas Ranch House is that the latter don’t seem to have learned a thing. The Clunes, especially the girls, grew as people during the experience, despite their foibles. The Cookes did not. The Cookes are, if anything, more convinced of their moral rectitude than when they started. They didn’t allow the experience to change them at all, and that’s a shame.

(One final note: During the summer, the ranch is infested with flies because nobody is willing to cart the manure from the ranch. “I guess this is something that they just had to deal with back then,” Mrs. Cooke tells the experts. Uh, no. They moved the shit away from the house, and they washed the dishes instead of letting them sit for days on end. The experts are appalled. I am, too. When I grew up, we had similar fly infestations every summer because the fields around our house were fertilized with silage. It sucked. It was gross beyond belief. The Cookes could have solved the problem; we could not.)