A couple of months ago, I reconnected with Ken, one of my college roommates. Turns out that 25 years after rooming together, he and I gain live in the same building.

Over dinner at Relish Gastropub — one of my favorite new restaurants in Portland — Ken and I reconnected. We talked about life and love. We talked about money. We talked about food. In the decades since I knew him, Ken has become a professional chef. In fact, he teaches restaurant management at one of the culinary schools here in town.

At one point, the conversation turned to books. “I used to have thousands of books,” I told Ken. “I still have too many. But moving into my new place has forced me to do yet another book purge. If Kim moves in with me, I may have to get rid of even more.”

“Yeah,” Ken said. “I love books too. Especially cookbooks. I have a cookbook problem.” We laughed at the notion he was addicted to cookbooks.

“You know,” I said, “I’ve been doing more cooking now that I have a decent kitchen. I like cooking, but I haven’t done much of it since Kris and I split up. Do you have any cookbook recommendations?” 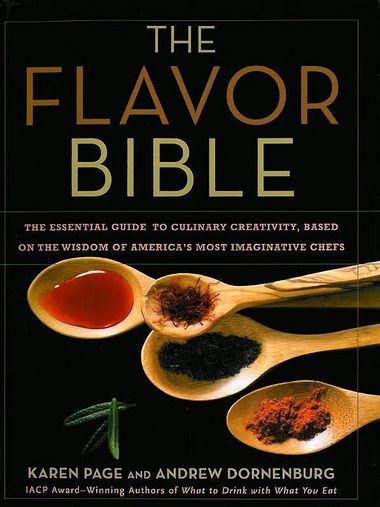 The next day, I borrowed a copy from the library. I liked it. Not only does The Flavor Bible list matching flavor combinations, it also tells you which flavor combinations to avoid (don’t mix basil and tarragon, for instance). It offers tips and ideas from great chefs around the United States. Some of the tips are short and sweet, like this one from Emily Luchetti of San Francisco’s Farallon:

Blueberries and lemon go really well together. Blueberries are a thick fruit with a lot of pectin in them, and intensely flavored. You need som lemon to cut through that.

In the blueberry section, there are quotes from other chefs that suggest using cinnamon or maple in combination with blueberries.

Other tips are longer. For example, The Flavor Bible includes a sidebar in which Gina DePalma of New York’s Babbo describes how to build a cheese plate. As a guy who likes his cheeses (and likes to build cheese plates), these 250 words are gold.

Though The Flavor Bible doesn’t contain any actual recipes, it does list hundreds of dishes from restaurants around the country, such as:

The names and descriptions of these dishes are often enough for inspiration. (Plus, you can sometimes google to find a recipe.)

Sometimes a chef will describe a dish in detail (though not with an actual recipe). I’m eager to try Gabriel Kreuther‘s watermelon salad, which includes a tomato confit and a layer of browned pistachios with salt and pepper. Sounds delicious.

Since I bought this cookbook a month ago, I’ve used it several times each week. Like my friend Ken, I grab The Flavor Bible whenever I have spare food in the fridge that I need to know how to use. Sometimes I use it to figure out how to add another dimension to something I’m making.

Here’s an example. For the next three weeks, Kim and I are doing a plant-based “cleanse” together (with a small portion of lean protein in the evening). As Kim (and Kris) will tell you, I’m not so good when it comes to eating plants. I need help getting creative with them. That’s where The Flavor Bible comes in.

Yesterday I used it for something as simple as a fruit smoothie. I’d already added banana, coconut milk, berries, and vanilla protein powder. “What can I do to punch this up?” I wondered. “Maybe cinnamon?” I pulled down The Flavor Bible. Sure enough, bananas and vanilla combine well with cinnamon, and berries are on okay flavor match. I added a bit of cinnamon to the smoothie and it helped.

The Flavor Bible contains nearly 400 pages of flavor affinities, which it ranks on four levels based on how many chefs recommend the combination. Of these thousands of permutations, I scoured the book to find only 39 that received the highest number of endorsements. These are the “Holy Grail” flavor pairings that the most experts agree upon. Here they are:

I find it interesting that a handful of flavor combinations appear in the listing for both ingredients (strawberries are recommended with rhubarb and rhubarb is recommended with strawberries), but most of the pairings are only uni-directional. Not sure what that means. 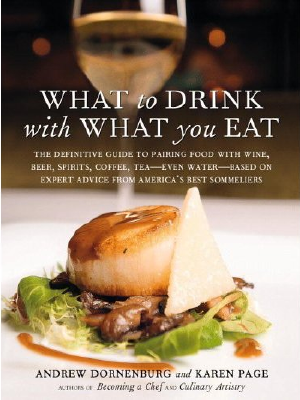 If I have one complaint about The Flavor Bible it’s that the highly-recommended flavor matches tend toward the conventional. I wonder if they’re recommended not so much because they’re great combinations but because they’re well known.

Still, I have to agree with Ken. The Flavor Bible is a great book, and I can see keeping it in my kitchen long after other cookbooks have been donated to Goodwill. I look forward to many years of exploring its suggestions. I’ll start tonight. Kim and I are going to try some jicama with chile peppers and lime!

The authors of The Flavor Bible also wrote a book called What to Drink with What You Eat, which apparently follows the same format. Guess what I’m going to borrow from the library when I run my errands today…