On Friday, Kim and I had dinner with Jason and Kyra Bussanich. Jason is a chiropractor in Lake Oswego and his wife Kyra owns a popular gluten-free bakery. (Kyra also won an episode of Food Network’s “Cupcake Wars”.)

Over dinner, we touched briefly on the notion of a gift economy. Wikipedia has a great definition of this concept:

A gift economy is a mode of exchange where valuables are given without an explicit agreement for immediate or future rewards. In contrast to a barter economy or a market economy, social norms and custom govern gift exchange, rather than an explicit exchange of goods or services for money or some other commodity. Gift exchange is frequently “embedded” in political, kin, or religious institutions.

The next day, Kim and I joined Kyra and her mother to see the Dalai Lama speak at an environmental summit here in Portland. At one point, the moderator posed this question to the panelists: “On some level, the human experience is all about consumption. Life lives by consuming life. But how do we moderate our consumption to reasonable levels?” All of the answers seemed very similar: 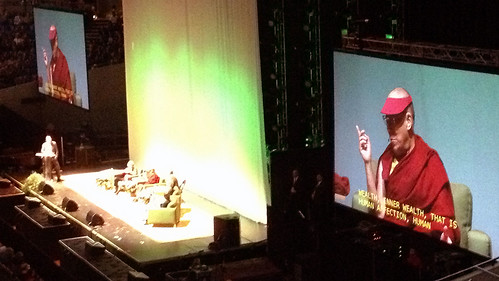 The Dalai Lama actually has a great sense of humor. I like him.

As I listened to the panelists respond to this question, I was again reminded of the gift economy. This is a concept I first discovered while reading Kim Stanley Robinson’s science-fiction trilogy about the colonization of Mars. In the second book, Green Mars, the colonists grapple with constructing a new economy, one that’s neither capitalist nor socialist, but something more sustainable. As part of that, a sort of background gift economy emerges where individual outposts share their surplus with others. It’s an important part of a larger economic model.

There are some obvious pragmatic problems to the gift economy. It’s a utopian ideal that operates best in the rarified air of argument and hypothesis, and is less likely to succeed (let alone be implemented) in the real world.

But while such a system might not be practical for an actual global (or national or municipal) economy, a culture of gift-giving can be an excellent supplemental economy, a voluntary means of building mutual goodwill among family, friends, and neighbors. A gift economy builds social capital, bringing communities closer together.

Though I haven’t used it myself, I hear that FreeCycle is a great example of the gift economy. Here’s the group’s mission statement: “Our mission is to build a worldwide gifting movement that reduces waste, saves precious resources & eases the burden on our landfills while enabling our members to benefit from the strength of a larger community.”

The extraordinary power of compound kindness

We don’t need to sacrifice our own interests to participate in the gift culture or to generate social capital. It’s not a zero-sum game. Often, we can create win-win situations that allow everyone involved to profit.

The older I get, the more I’m convinced of the importance of social capital.

Social capital comes from building a broad network of relationships, a network that you can draw upon to help yourself and help others. This isn’t networking in the smarmy, slimy sense, but in the authentic “I’m your neighbor and your friend” sense. A complex network of people will have thousands (millions!) of connections, creating a powerful web of support. (You can see great examples of this in Ben Franklin’s autobiography and in Keith Ferrazzi’s Never Eat Alone.)

These networks are usually built through everyday kindnesses. These actions compound (just like compound interest) to yield larger returns in the future.

“Building community is the adhesiveness that holds us together as a society. Without community, we break down into individual consumers.” — John Kitzhaber