Over the past month, Kris has developed a new hobby: dancing. She sort of mocked my obsession with Dance Dance Revolution at first, but it didn’t take long for her to push me aside and take over as Queen of the Dance.

As with other things we enjoy, we’ve become evangelists for this game. This is strange, I know, since it’s been around for year. But it’s new to us, and new to most of our friends. Now when we have company over, they’re generally required to dance for their supper.

Here, for example, are Nikki and Celeste just learning to play:

Poor Nikki has the lousy pad in that video, and it slips and slides beneath her. (Since then we’ve added a carpet pad, which prevents potentially dangerous spills.) At the end of our last book group discussion, we dragged people to dance. A formal dinner party is no excuse — even then we put our guests to the test. 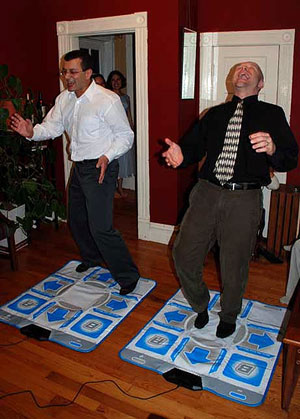 Pierre and Mike get their groove on (photo by Amy Jo)

Rhonda reports that she is now stuck on the same song I am. In “groove circuit” mode, you’re able to unlock new venues and songs. But the difficulty level makes a mind-boggling leap with the song “Super Samurai” (or whatever it’s called) comes along. Kris and I have been practicing other songs, working from Basic level to Difficult. Each song is rated by a number of “bombs”. “Super Samurai” has six bombs — we’re able to do songs with four bombs.

I guess we’ll just have to dance some more.