I borrowed the neighbor’s pressure-washer on Friday. After five years at Rosings Park, I decided it was time to clean the gunk and the moss off the sidewalks. It was fun, actually, and strangely satisfying.

I encountered a problem, however, while working next to the house. As I sprayed the sidewalk, the mud and grime splashed onto the siding. This meant I had to spray down one wall. Unfortunately — and unbeknownst to me — this also meant that I was spraying down a nest of bees (or wasps or hornets — whatever the stupid things are).

I was merrily spraying away when I felt a sharp pain in my hand. I shook my hand a little, but kept on spraying. The pain continued. I looked at my hand. There were two bees (or wasps or hornets), backs arced, driving their stupid stingers into my stupid fist. Ouch!

Swearing forcefully, I dropped the pressure-washer and shook my hand as hard as I could. The stupid bees (or wasps or hornets) continued to sting me. Finally, I brushed them off, and then danced around, cursing and swearing. After I got that out of my system, I moved the pressure-washer away from the nest and finished my work.

“Poor sweetie,” Kris said when she saw my hand. “Does it hurt?”

“Yes it hurts,” I said. “It hurts like hell. Remember my adhesive capsulitis? That pain was a 9. This is an 8. It sucks.”

Fortunately, the pain subsided. Unfortunately, it was replaced by swelling. 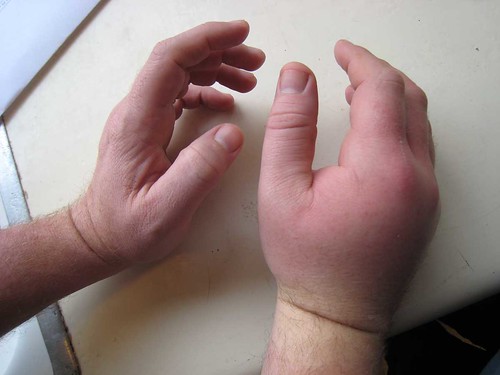 On Saturday, we drove to the hardware store. “What happened to you?” asked the checker as we were paying for our stuff. I told her I’d been stung. She sort of freaked out. “Oh my god. You’ve got to go to a doctor. Why haven’t you gone to a doctor? With swelling like that, you need to go to a doctor.”

As we were driving home, Kris said, “Maybe you should go to the doctor.”

So we drove down to Canby — the only place we could find that offered “urgent care” for our insurance network — and I went to the doctor. Though she assured me that there was nothing to worry about, she seemed duly impressed by the swelling. She prescribed a couple of drugs and asked me to return on Sunday.

The swelling continued. By Saturday night, my entire right forearm was swollen. It was as if I had a grotesque meaty claw instead of a hand. I certainly could not type.

Now, on Sunday evening, the swelling is mostly gone (though not completely) and has been replaced by a dull ache throughout my hand and wrist. Plus everything itches. As you can see, I’m able to type, though it hurts to do so for very long. That’s bad news because I don’t have anything written to go up at GRS in the morning!

Meanwhile, I have a little present for the bees (or wasps or hornets — whatever the stupid things are). While we were at the hardware store on Saturday, I bought three cans of long-range (27 feet!) poison. Those bastards are dead in the morning.