As I have for each of the past three Saturdays, I rose early this morning to go running. I’m participating in group training runs, with the goal of finishing the Portland Marathon on October 5th.

“You should bump up to the next pace group,” she told me. (I had not doubt that would be her recommendation!) “This weekend’s run is a trail run, anyhow,” she said. “Those are generally slower, so you should be fine.”

I rolled out of bed this morning and headed out the door. I looked sporty in my running attire: my old soccer shorts, a long-sleeved exercise shirt worn over my long johns, a stocking cap, and a pair of warm gloves. I was also wearing my brand new water belt (with a pouch for my wallet, keys, and iPhone!) and my new thick woolen “no-show” socks. I almost looked like a runner.

The trail run was held in Portland’s Forest Park, where parking is scarce. In fact, I had to park about a quarter mile from our starting location. It took me five minutes to walk down to where the group was gathering. I was cold! While I waited for the faster pace groups to leave, I pulled out my iPhone and sent the following to Twitter:

So cold! In forest park for 6 mile run. Near freezing. In shorts! At least I brought iPhone. Ha!

As the run began, I was worried. I was really very cold. My legs felt heavy. My stride didn’t feel right. I didn’t like the muddy trail. And I was breathing hard. But as I warmed up, things felt fine. After two miles, I was in great shape. As we continued to run, I felt even better. 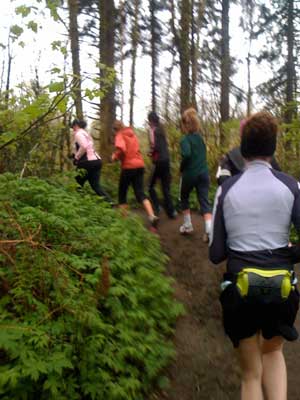 When we turned around at the four-mile point, I moved to the front of the single-file line, where I could follow directly behind our group leader, Frank. I asked him how he knew what pace he was going. “I don’t really,” he told me. “I just gauge the speed by you guys. If you’re chattering, I know we’re going at the right speed. If you’re quiet, we’re going to fast.” He explained how to do a similar “talk test” when I’m running on my own. “When you’re training, you always want to be able to talk without gasping.”

I told him I was really enjoying the run. “It’s not hurting my knee,” I said. “I feel like I could do this all day. I may even go for eight.”

“How many miles did you run last week?” he asked.

“Was that the longest run you’ve ever done?” he asked.

“You should only do six miles today,” Frank said. “Six miles on the trail is like eight miles on the road. You don’t want to overdo it.”

But when he stopped to say farewell to the six-milers, I did not leave. “Are all of you up for eight miles?” he asked the five of us who remained. He looked me in the eyes.

For the last two miles, Frank picked up the pace, but only a little. That seventh mile was awesome. I wanted to be running by myself. I wanted to be loping along the trail, not jogging. I wanted to speed off on my own. “I can do ten miles,” I thought. “And maybe I will.”

But the eighth mile was more difficult. By the time we’d climbed the hill to our starting point, I decided that discretion was the better part of valor. I can run ten miles some other time. Besides, I had just run eight miles on a dirt trail in bitter cold. That’s three more miles than I’ve ever run at any one time in my life.