My nephew, Noah, came to work with Jeff the other day. His baby-sitter was sick, so he hung around his dad’s office playing with Hot Wheels and generally being a four-year-old. At one point he decided to tiptoe down the hallway, throw open my door, and shout, “BOO!”

Being a four-year-old, he wasn’t exactly sneaky. I heard him coming. Still, I did my best to act scared. “Ah!” I said, holding up my arms in fright. Oh, how Noah laughed. He thought this was a riot. He ran to Jeff and died laughing on the floor.

“What are you doing?” Jeff asked.

When his giggles had subsided, he tiptoed down the hallway, threw open my door, and shouted, “BOO!”

Again, I acted scared. I leaped back in my chair, flung my arms in the air, and put on my best show of fear. Again, Noah thought this was great. He ran to tell Jeff: “I scared Uncle J.D. a lot. He went backward in his seat!”

Things were quiet for a few minutes. Maybe Noah was playing with his Hot Wheels. Maybe he was drawing. Whatever the case, eventually he decided enough was enough. He announced to Jeff, “I’m going to go scare Uncle J.D. again.” And so he did. In fact, he continued to scare me for five or ten minutes, by which time I’d long since given up on play-acting every time. (I had work to do!)

I did, however, take time to convince Noah that he could scare all of you… 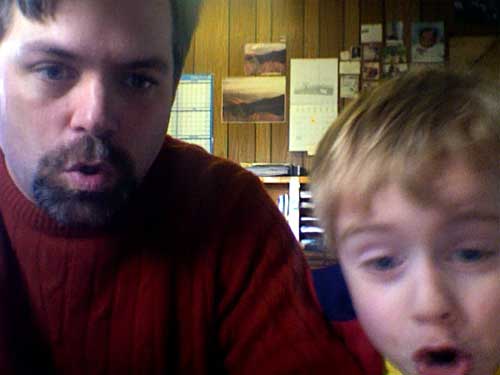