Gasoline Alley – A Walk in the Woods

I warned you: now that I’ve officially mothballed Four Color Comics and Vintage Pop (though the latter will return in a year or two), you folks will have to bear the brunt of my comic-y meditations.

Today I want to talk about Gasoline Alley. I read this comic strip when I was a boy, but I could never really get into it. I didn’t get it. It wasn’t funny. The story didn’t make sense. It was worthless to me. My friends and I used to joke about it, making fun of it.

However, when Drawn and Quarterly recently began to publish a reprint series of the strip, I picked it up. I was blown a way. Gasoline Alley is my favorite comic strip of all those I now collect. It’s amazing.

When Frank King started the strip in the late teens, it was usually just a daily single-panel car gag. (Cars were novelties at the time, and not all comic strips adhered to a standard format.) In 1921, though, this all changed. King’s editor asked him to broaden the strips appeal, so he introduced a “baby on the doorstep”, and Gasoline Alley began to move from car-centric to family-centric. More interesting, though, is that his characters began to age in real time. The baby, Skeezix, grew up with his readers, eventually going off to fight in World War II.

King has a talent for observing the details of life, much as his fellow Midwesterner Garrison Keillor now does. He takes pleasure in the minutiae, in the everyday stuff. His art is both gangly and chunky, but it serves his subject well. (Whenever I get a new volume in this series, I take delight in pointing things out to Kris — “Look! He’s still using gaslight here, but by this time, he has an electric lamp.”)

All of this is prelude to the real subject of this entry. In the Gasoline Alley Sunday pages (which I have not read because they’re not collected in the compilations), the two main characters, Walt and Skeezix, would take an annual walk through the woods. Roger Clark has collected these autumn walks into one location.

They’re magical. Especially those by strip creator Frank King. Here’s a good one (click to enlarge): 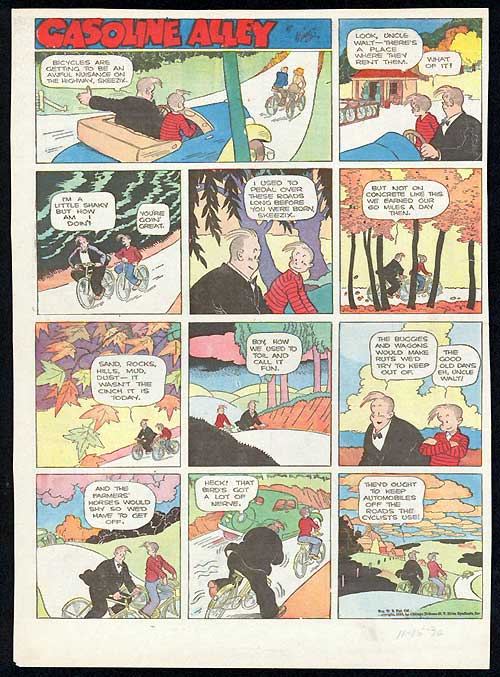 The third volume of Walt and Skeezix (as the Gasoline Alley compilations are called) will be released at the end of June. I recommend these books highly.