After less than 48 hours in Johannesburg, we packed our bags for another flight — this time to Victoria Falls, Zimbabwe, where the airport is even smaller than the one in Belize (though not nearly as quaint). 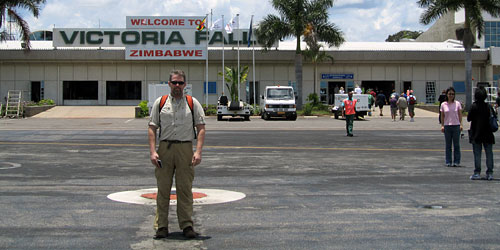 The Victoria Falls airport — all of it

“Welcome to real Africa,” said Francis, our local guide, as our bus started the two-hour drive to Chobe National Park, and we knew what he meant. Johannesburg had felt like any large Western city. Sure, it had its own flavor, as all cities do, but it would have felt perfectly at home somewhere in the United States or Europe.

But Zimbabwe was hot, humid, and dense with forest. The soil had a rich, red color. (Francis told us the soil didn’t hold moisture.) And, as Brian (the tour manager) had during our tour of Johannesburg, Francis thanked us for coming. He seemed grateful.

“We make our livings through tourism,” he said. “Tourism is our main industry.”

Note: For more on this subject, check out yesterday’s post at Get Rich Slowly, in which I talk about the financial and economic aspects of our trip. It’s not nearly as dull as it sounds. 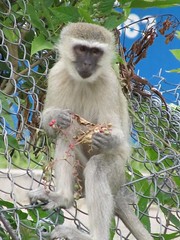 On our drive from Victoria Falls to Chobe, we watched for wild animals. We saw lots of elephant dung, but no elephants. We did, however, see giraffes. And at the border crossing, I had a close encounter with a vervet monkey.

Between Zimbabwe and Botswana, we had to pile out of our bus, walk through a disinfectant (to prevent the spread of hoof-and-mouth disease), then re-board a different bus. While we were doing this, I snapped photos of the monkeys, one of which tried to steal the bag containing my shoes!

After a quick trip to our rooms at the Chobe Safari Lodge, we boarded open-sided safari vehicles for a drive through nearby Chobe National Park. The trip started sedately, with warthog sightings and a variety of birds. But things picked up as we saw hippos and crocodiles and elephants. The elephants and the baboons were the highlights of the drive. Our first safari was lovely: lovely weather, lovely golden late-afternoon light, and lovely company. 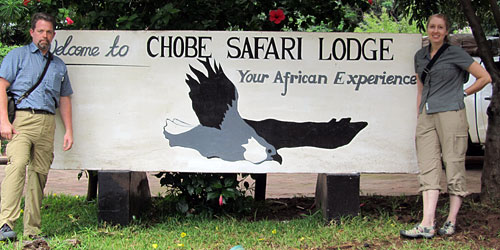 At the Chobe Safari Lodge 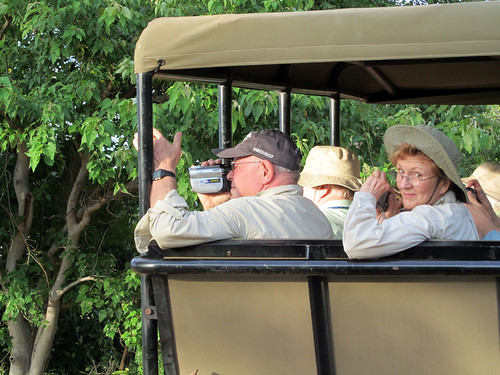 Ron and Suzanne, on safari in Chobe 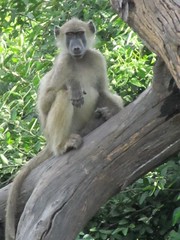 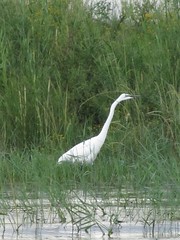 Back at the lodge, Kris and I fell asleep quickly.

In the morning, Kris felt sick again. She’d been sick in Johannesburg, fine the next day, and now was hit once more with nausea. As a result, she opted out of our morning trip to Namibia, staying at the lodge to do some birdwatching. (Several of our companions made jokes about her “morning sickness”.) 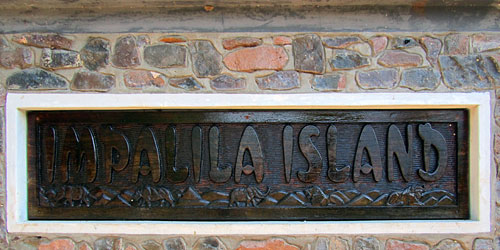 Impalila Island lies at the very tip of Namibia, at the end of the Caprivi Strip, which is a narrow strip of land that runs between Botswana on the south and Angola and Zambia to the north. (Think of the narrow strip that juts out from Oklahoma.)

After the formalities, Richard, our local guide, led us about a mile inland on dirt roads to a Namibian village. Richard told us there are 47 such villages on the island, and they have a very traditional culture. There are few vehicles — we saw just one truck — but I saw several folks using cell phones. (Though no obvious source for power to charge them.) The village we visited has been hosting visitors since 1993; the people are ambivalent to tourists.

Note: Richard told us that it’s 300km to the nearest Namibian town, though he didn’t saw what the town was or how people got there. People do go to Kasane, the nearby town in Botswana, though he said it used to be easier to do. (He didn’t elaborate on this. Since he was a little surly, I didn’t pursue the topic.)

In a lot of ways, what we saw of Impalila Island reminded me of rural Canby when I was a boy. There was a lot of rubbish strewn about, the homes and roads were rough but functional, and the people (especially the kids) seemed free and aloof, with a nonchalant, indolent air.

I was especially happy to see two young boys hacking at a root with a small machete (about the size of a butcher knife). These kids were maybe six years old, and were chopping the root to get at the sweet stuff inside, which they’d chew. This reminded me how we used to play with knifes (and broken bottles, etc.) when we were children, something you’d never see parents allow nowadays. 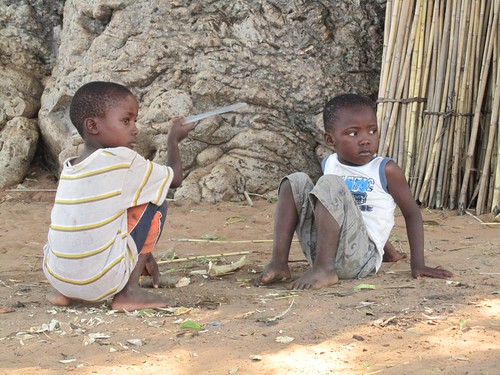 Two boys playing with a machete/knife in a Namibian village

On our return trip to the lodge, I was first back to the boat at the Botswana border post. This gave me time to sit and watch as 12-20 locals tried to cram into a water taxi. They were taking their time, joking and smiling. Many were missing teeth. Some carried large bundles: clothes, dried fish, and so on. One woman had a huge basket that she carried on her head — it contained the stuff she’d just bought in town (Kasane).

As we cruised up river, I admired the wide, blue Namibian sky. It was gorgeous. 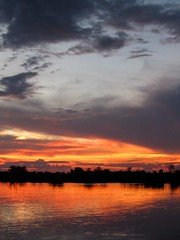 Africa’s ever-changing sky — just a few hours apart in Namibia
Note: I was intrigued by the terrain of the area. To the south of the Chobe River, on the Botswanan side, the land was hilly and covered with vegetation right up to the bank of the river. The river itself had marshy spots and many islands. Then, in Namibia to the north, the land was perfectly flat and covered with tall grass, much like the American prairie. It was obvious why this spot was used to divide the two countries: They looked like two different countries!

In the afternoon, the entire group gathered for a game-viewing cruise. Though she still felt sick, Kris came along. Good thing, too, because she saw a lot of birds. (With our companions Jim and Linda, Kris watched for birds during the entire vacation.) We spent two hours cruising up the Chobe River, the first hour of which was made more exciting by a heavy downpour. After we reached the same point we’d seen elephants the night before, we headed downstream to the lodge. On our cruise, we saw elephants, crocs, many hippos, and lots of birds.

Our tour group, watching from the boat 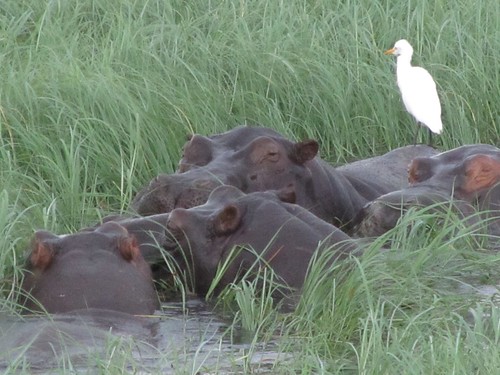 In the morning, we ate breakfast with 89-year-old Doug Gordenier, who came to Africa without his wife. They’ve been married for many years, and have traveled together for a long time. They started young and made it a priority, even when they had children. Now Doug’s wife is unable to travel. This was his first trip without her, and it made him sad.

A ten-minute video showing highlights of our stay at Chobe.

After breakfast, Kris and I walked to the far lookout, at the border between the lodge and the national park. We spent some time watching birds, particularly a weaver (who was tearing apart one nest to build another) and a malachite kingfisher.

Just before noon, we boarded the bus for the drive to Victoria Falls in Zimbabwe.