I’m in Trader Joe’s with Rich Rogers. I’m looking for bread. He’s looking at cheese. Rich is in the process of opening an artisan cheese shop in Dallas, Texas, and he never misses a chance to check for cheese in other stores. The past year has been a crash course in retail marketing for him. It’s a harrowing process, but he loves it.

On our way to the cash registers, I stop to grab a jar of clam sauce. “I don’t even know why I’m buying this,” I say. “But it sounds good.”

Rich points to the jars of clam sauce, lined side-by-side. “That’s multiple-face merchandizing,” he says. “You noticed that sauce because the jars were arranged like that. Longer ago, there would have just been one jar in front, and all the other jars lined up behind. But because there was more shelf space devoted to the clam sauce, you noticed it. And now you’re buying it. That’s merchandizing in action.”

Rich hasn’t always been interested in retail merchandizing. For fifteen years, he produced film and video. As a producer, he hired people and put all the pieces together. In post-production, he learned supervision, and he learned to get at what the client wanted. This experience taught him to be organized, and trained him to become a good manager. But now he’s ready to parlay these skills this new venture: he’s going to risk his personal finances on a dream.

I sat down recently with Rich and his brother-in-law Wayne to talk about the risks and rewards of entrepreneurship.

J.D.: Why did you leave film production? What made you want to start a cheese shop?
Rich: We had kids. Shortly after we had kids, our roles changed. My wife’s career got more demanding, and mine wasn’t moving forward. I started cutting back my hours to spend time with my daughters. I began to re-evaluate who I was and what I was doing. I’ve always had a passion for food, and during the process of staying home, I fell in love with cheese. I never wanted to be a chef, but I always wanted to work with food. This was an opportunity to go into the food business.

J.D.: I recently made an entrepreneurial leap myself, and it scares me. Do you feel trepidation at starting your cheese shop?
Rich: Of course. The hard part is your friends and family are excited for you. It’s bold! You’re doing something that many people have wanted to do. But it’s a roller-coaster ride — one moment I’m excited about it, the next I’m nervous and depressed. This is the most exciting thing I’ve ever done in my life, but it’s the scariest thing I’ve done, too. I’m taking my savings and I’m taking loans from family. It’s the biggest gamble I’ve ever taken. And with where the economy is…But even with where the economy is now, I have to make the leap. This is my only chance.

J.D.: Why is this your only chance?
Rich: Americans in general, and Texans in specific, are scared of foreign things with strange names that smell funny. Tastes are changing, though, and they’re starting to get more interested. Plus there’s another group in Dallas that wants to open a cheese shop about the same time I do. I feel like if I don’t get in now, I’m going to miss this opportunity. Portland has three or four good cheese shops. Dallas doesn’t have any. It has a couple big grocery stores with a wall of cheese and nobody to help.

J.D.: When do you open?
Rich: We hope to open in June. We start paying rent in June. Realistically, it’ll be more like July.

J.D.: Do you have a partner?
Rich: It’s me and my wife. We have equal ownership. She can’t have an active role at the start, so for now I’m doing it by myself. It’s all on me. I need to find a way to make it work.

J.D.: That’s one of the things that scares me about quitting my day job. Before, the web site was just a hobby. Now it’s my only source of income. It’s all on me now, too. I’m nervous about making mistakes. Have you made any mistakes so far getting started?
Rich: Any time I go anywhere, I try to find out if they have a cheese shop, and then I go in and pick their brains. A lot of people have said finding a location is the toughest thing. I almost made a mistake with the location, but we’re really happy with the spot we chose. 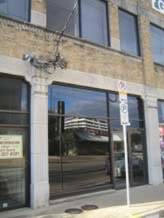 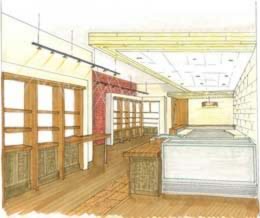 It’s a cool location in a great old building, although it hasn’t has any renovation in 35 years. Our landlord really likes the idea, and can’t wait for us to open. There’s a butcher one block over, and a bakery two doors down. There’s a chocolate shop nearby. It’s a good location.

J.D.: I’ve never talked with anyone about leasing a building before. How does that work?
Rich: When we pay our lease, we’re paying the owner’s cost on the building. It’s just like renting a house. When you rent a house, you’re paying the owner’s mortgage. Same with a lease.
J.D.: Some of my readers have a problem with that. They don’t think it’s right that the tenant should pay the owner’s mortgage.
Rich: But that’s the way it is. And the thing that really gets you about renting a commercial space is you not only pay for the owner’s mortgage, you are also assessed charges throughout the year to cover their insurance, taxes, and management of the property. It seems like a racket, but it’s necessary. That’s the way it has to be. Otherwise why would anybody do it? They’d lose money.
Wayne: One thing people don’t realize when they start their own business is that their taxes are going to be higher. Their costs go up. Yeah, you may be selling $600 a day, but most of that goes to taxes.

J.D.: I really like the name and the logo. Where’d that come from?
Rich: It’s named after my grandfather, Pete Scardello. He was a big influence on my life. He taught me a lot about the importance of food. It was weird because in small-town West Texas it wasn’t okay for a guy to cook unless it was on a grill. He taught me that a meal isn’t just a time to feed yourself — it’s a time for friends and family. That’s one of the reasons I love cheese. It’s not just an indulgence — it’s something to share. It’s a way to extend the conversation. Cheese is the perfect food. It has everything except fiber. It has a perfect balance of fat, protein, and carbohydrate. You take a hunk of crusty bread and you’ve got a perfect meal.

J.D.: Yeah. I love that. It’s a great meal. But Kris and I buy most of our cheese at Safeway. Why would anyone go to a cheese shop? Why not just go to the grocery store?
Rich: A specialized shop can offer more than a grocery store. A lot of people who are very successful can take an idea and make it more appealing, even in a flooded market.
Wayne: And Rich knows a lot about cheese. He’s spent a lot of time learning about it. You can get more help from him than at the grocery store.
Rich: Not only did I have to learn about cheese, I had to learn about retail, about gourmet food, about marketing. There are so many factors involved with becoming successful — you have to pull on every scrap of knowledge you have. My father is in retail. We’re in different markets, and have different businesses, but I go to him for advice. Tons of it. He’s a great resource.

J.D.: Does entrepreneurship run in your family? My family, for example, is rife with it. My dad was always starting businesses. Both of my brothers have started businesses. Many of my cousins have, too. Is your family like that?
Rich: Yeah. My father started life with absolutely nothing. They lived in a one-room shack. They had a creek behind the house that acted as their refrigerator. But he went to school. He got an education. He started with a little fuel jobber that he owned a fraction of, but he worked hard and built that into an empire. Now he owns a string of gas stations. I remember when I was little, we’d be on family vacations and he’d stop at random gas stations because he’d see something different. He’d go in and buy some beef jerky just so he could scope the place out. He was always looking for new ideas. My dad’s gone from nothing to being wildly successful. He possesses qualities I someday hope to possess. He knows when to take a risk. He can talk to anybody. To me, he’s a genius. I want to get to that point.

J.D.: That ability to talk to anybody is so important. I can’t do that. Wayne can. I’m envious.
Wayne: It’s not that I’m good at it, either. But I just do it. I had to. In the car business, you have to be able to talk to anybody. Even when I didn’t know what I was doing, I had to fake it.
J.D.: “Fake it ’til you make it.”
Wayne: Yeah.
Rich: I’m not really good at faking it, but you just have to get over that. With this venture, I’ve just learned that I have to move outside my comfort zone. There’s nobody else to do it. I do have to fake it. But you know what? It works.

Probably the best piece of advice I ever got from my dad is that happiness is a choice that you make each day. Every day, you get up, and you have the choice whether you’re going to be happy or not. I read a book recently called The Four Agreements, and it made a big impression on me. I’ve learned that you are what you think you are. You make all of these agreements with yourself. If I’d just tell myself I’m outgoing, I’d be outgoing. You are what you tell yourself you are. If you can see yourself as successful, you will be. Take what you’ve got and go with it.

Conclusion
There are two ways to build wealth: spend less or earn more. I write a lot about frugality and cutting costs, but the truth is I believe that the greatest gains come from boosting your income. Business ownership is one way to do this. But it’s not easy. Starting a business can be rewarding, but it carries a lot of risks, including the risk of losing money.

Nobody can know for sure whether Rich’s venture will prosper, but from what I’ve seen, he’s got a damn fine chance. He’s passionate about his product, he’s been methodical in his preparations, and he has a lot of charisma. With just a little bit of luck, I think he’ll become the Big Cheese in Dallas.

Thanks to Rich for letting me speak with him, and thanks to Wayne for a fine meal, fine wine, and fine cigars.