On Saturday, I got up for a long run in the woods. Normally I would have joined the marathon training group in Portland, but we were on our annual vacation in Sunriver, so I decided to be disciplined and run on my own. While my compatriots were scheduled to do a seven-mile road run, I tried to map out an eight-mile run on forest trails along the Deschutes River.

After a lot of fuss (I can’t seem to get out the door for a run without a lot of fuss), I left the rental house at 6:15. Before I headed out, I posted the following on Twitter:

On a long weekend vacation. Off for a solo 8-mile run in the woods. My biggest fear? Being eaten by a bear. I’m bear-phobic.

I was only half joking. I’m always worried of bears.

It was cold out. There was frost on the windshields of our cars. My breath was puffy. But I was bundled up against the elements, and knew that once I started running, things would be okay. I made my way along the paved roads to the beginning of the hiking path to Benham Falls. I had scrawled a rudimentary version of this Forest Service map to help me navigate the network of trails: 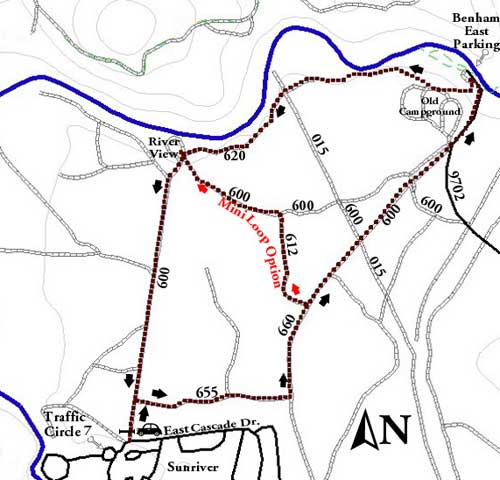 At first the run was difficult. Runs always seem to be difficult for the first ten or twenty minutes. The ground was a curious mix of too hard and too soft. Because it was below freezing, the dirt was crunchy. But the soil was also “airy”, with a lot of compression when I stepped on it. It was confusing &mdahs my body was forced to make all sorts of micro-adjustments.

I followed my hand-drawn map along FS655 to FS600 and into the old campground. Everything was fine. I found the hiking trail along the river. But then things got a little hairy. There was snow on the ground. I continued along what I believed was the correct path, but found myself completely surrounded by a sea of white. There was not way to tell where I was or where I should be going. Yikes. I backtracked to a known landmark, and tried to figure out what to do. Eventually I found another path that seemed to go in the right direction and resumed my run.

I ran up the hillside and through the woods, occasionally having to deal with patches of old, crusty snow. (This stuff was icy, so I walked over it, and gingerly.) The brush along the side of the trail chewed up my ankles. I couldn’t really tell where I was.

Eventually I came to a long, wide straight path dominated by power lines. “This doesn’t look right,” I told myself. “I don’t think I’ve come far enough.” I pulled out my map. I couldn’t tell if this was the right place to head south or not, but neither did I have any better options. I couldn’t see that my current trail continued further. I followed the power lines south.

About ten minutes later, I encountered FS600 coming in from the side. “That’s strange,” I thought. “Aren’t I already on FS600?” I decided to have faith. I continued south on FS600. When it turned northeast, I continued to follow it. “Aha!” I thought. “This looks familiar.” I had run this path half an hour before. I now began to suspect that I’d taken the mini loop option marked on the map. (I was wrong, but I had the right idea.) But then I took a wrong turn and followed FS600 southeast to paved road 9702.

Ultimately I decided that I should just head north along the paved road, which I knew led to the campground. And it did. I followed the path up the hillside again and then southwest to the powerlines. When I went to pull out my map again, it wasn’t there. It had fallen out of my pocket. “Argh,” I thought. “I’m lost in the woods without my map.”

I wasn’t too worried, though. I knew that if I followed the Deschutes River west and south, I’d eventually come to parts of Sunriver that I knew. I was more concerned with continuing my run. Because I knew the powerline road had been wrong, I searched until I found another trail heading southwest. This trail led me to another confusing junction, but I was able to puzzle out the correct path, and then find my way back to the start.

I had run (and walked when confused) for ninety minutes. “I don’t think I’ve gone eight miles,” I thought. “Maybe I’ve gone five.” So I turned around and ran back the road I’d just travelled until I reached the river again. Then I ran home. It turns out my guess-work was about right.

When I returned to the rental house, I used MapMyRun to determine the distance I’d travelled. I had actually traveled 6-1/2 miles after ninety minutes. With my extra run to the river and back, I had brought the distance to 8.47 miles in one hour and 51 minutes.

Best of all? I hadn’t encountered any bears.