When I was a boy, I loved nature films. We saw a lot of these in school, of course, but once in a while, Dad would actually take me to see one in the theater. My favorite nature film was Born Free, about Elsa, the lioness who was raised from a cub by humans in Kenya.

I saw Born Free several times before reaching high school — but never again since. I’ve never forgotten about it (and, in fact, think about it a couple of times each year), but I’ve never sought it out, either.

The other day, I was browsing at the always-chaotic (and not in a good way) Wallace Books, a local used book store. Looking through the Africa section, I stumbled upon a hardbound version of Born Free, complete with mylar book jacket cover. Just a quick glance through the book was all it took to know I’d buy it. I plunked down my $9.50 and went home happy. 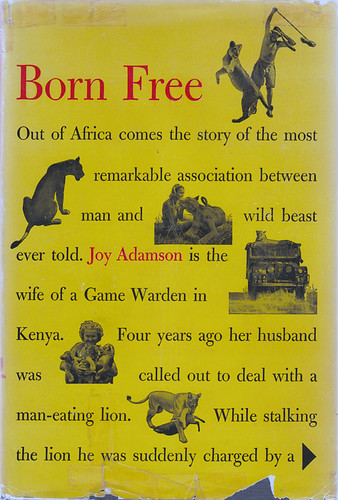 Born Free was written by Joy Adamson, whose husband was a Game Keeper for a region in Kenya during the 1950s. The book tells the story of Elsa, one of three newborn lion cubs rescued after their mother is shot. Joy and her husband George raise the cubs, keeping Elsa for several years before deciding to release her back to the wild. The book documents what it’s like to live with a lion, and is heavily illustrated with Adamson’s wonderful black-and-white photos.

I loved Born Free. It’s not the best-written book (and, in fact, it needs some editing for punctuation and grammar in spots), but it’s a fun story that comes alive thanks to the many photos. Plus, Adamson has a real affection and respect for the animals around her. She’s surrounded by elephants, rhinos, baboons, gazelle, crocodiles, gamefowl, snakes, and more. Born Free could actually be the source of my obsession with animal intelligence.

I’ll have to watch the film again soon. I couldn’t find an official movie trailer for Born Free, but I did find an amateur one:

Plus, the full film has been uploaded to YouTube. (Here’s part one.) As for myself, I’ll try to get the film from Netflix or buy it from Amazon. (Well, first I’ll check to see if the local CD exchange has it.)

Bill Travers, who starred in the film version of Born Free, went on to produce Christian the Lion at World’s End, the true-life story of a tame lion who is moved from London to Kenya, where George Adamson helps him integrate into the wild. I shared the story of Christian the Lion at Animal Intelligence in 2007. Here’s a short video clip that highlights Christian’s amazing reunion with his former companions:

I really have no patience with people who maintain that an animal’s life and actions are governed by pure instinct and conditioned reflexes. Nothing except reasoning powers can explain the careful strategy used by a pride of lions in hunting, and the many examples we have had from Elsa of intelligent and thought-out behavior.