Kris and I attended the Roth family reunion yesterday, as we do every New Year’s Eve. I’ve been going to this reunion ever since I was a little boy. It used to be held in the Smyrna Church between Molalla and Canby. I remember many cold January afternoons spent playing outside or in the kids’ room at the back of the church.

I stopped attending the family reunion when I left for college. It just wasn’t cool to go. About a decade ago, my aunt Virginia prompted me (and many of my cousins) to begin attending again, and I’ve tried to make it ever since. I don’t know everyone (and not everyone knows me), but it’s still fun to chat and to remember old times.

At yesterday’s reunion, this video was a hit:

The first four minutes show the Roth reunion from 1991, when I was a senior in college. I’m not there, of course. Again, it wasn’t cool. And while this video might not seem like much, it’s a fun way to see people who have died in the past twenty years. My father, for example, can be seen at 0:45, waving at the camera. (This is 4-1/2 years before he died.) And my grandfather is the short man in glasses with a white shirt and a tie (he would die that summer at age 88).

At the four minute mark, the video switches to footage taken at the 1954 Roth family reunion. The oldsters in our group yesterday had fun trying to identify everyone. The laughing girl in the plaid coat, for example, is my aunt Virginia, who can also be seen walking through the background of the 1991 video at about the ten second mark.

After we ate and chatted and watched the video, we grouped together for family photos. This is the Daniel Roth family reunion. Daniel had many children, including my grandfather, Noah. Here are a handful of Noah’s many descendants: 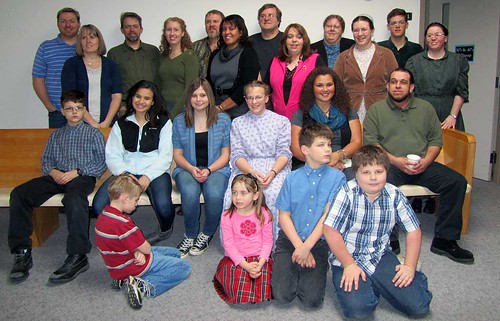 My brother Jeff is in the back row, on the far left. His wife Stephanie is standing next to him. I’m the third one from the left, next to Kris. Other prominent “characters” at Folded Space include my cousin Tammy, who is in the pink vest, and my cousin Nick, who is standing to the left of her. My nephew Noah is in the front row, sulking (though who knows why), and his sister Emily is to his right, in a pink shirt.

For more about my family tree, read this post from 2003 that lists my cousins. (Believe it or not, there are actually folks who find this blog and want to know more about my genealogy. They’re all distant cousins, of course, but it still happens.)

Note: That “cousins” post I just linked to is the first “re-mastered” post here at Folded Space. I’m going to g-r-a-d-u-a-l-l-y move all of the posts from the old site over to here, but it’s going to take a long time. Paul and I may automate the process later this year, but for now it’s a manual thing, and it takes a while.