Kris and I grow a vegetable garden every year, but some summers are more productive than others. This summer has been the most productive that I can recall.

We were swimming in berries from the end of May until the end of July. We had so many berries that we eventually gave up. Can you imagine? Not eating fresh berries that sit there, ready to be picked? We didn’t let them all go to waste, of course. Kris canned some of them. I’ve been enjoying toast and freezer jam every morning since we returned from San Francisco. 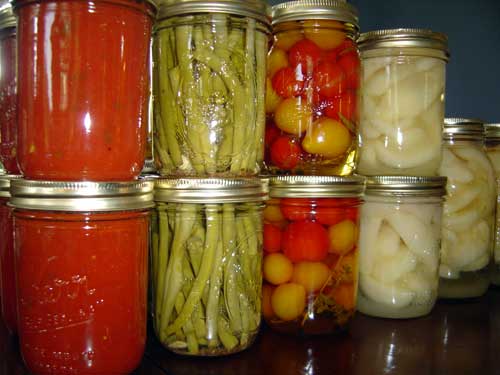 We were picking snow peas for just as long, eating them fresh off the vine. Eventually we gave up on those, too, and just let them wither. (We planted our fall pea crop a couple weeks ago; I have little one-inch sprouts.)

Kris and Craig masterminded a tomato-growing extravaganza: they ordered seeds together, and each are testing certain varieties. Kris has eight plants (plus just as many volunteers scattered throughout the yard), and she’s been harvesting the fruit like mad. She’s made tomato soup, tomato sauce, marinara sauce, and, of course, many batches of the Best Salsa Ever. Her tomato map hangs from the fridge, and she’s circled her favorite varieties (Aunt Ruby’s German Green, Yellow Pear, Bloody Butcher, Dr. Wyche’s Yellow, and maybe Caspian Pink).

Our neighbors have given us apples and pears, and soon we’ll pick grapes from across the street. From our garden, we’ve picked cucumbers and green beans and zucchini and corn.

What to do with all this food? (Especially since I’m allergic to many vegetables?) Can it, of course.

Kris has been canning like crazy — sometimes with Tiffany’s help — and last night, she set out the fruits of her labor: 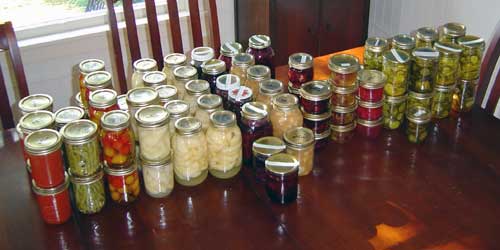 Later she realized that she’d forgotten a box of jars downstairs. “And don’t forget that we’ve given some away, too,” she told me. She’s also making some (gnat-infested) berry liqueur, which is fermenting on a shelf in the library.

Of course, all of this canning is nothing compared to some people…